It’s been two years since the last edition, but after a Covid-enforced absence the “most exclusive race meeting in the world”, the Goodwood Members’ Meeting, is back this weekend from October 15-17.

Running for the 78th time, the event will see a vast array of historic racing machinery running in anger, from Edwardian era cars to 1980s turbo monsters. There will be 15 races in total.

As well as vintage race cars getting back to what they do best, the Members’ Meeting will also feature demonstrations of legendary car designer Gordon Murray’s new T.50 Hypercar, on and off track displays of Ayrton Senna’s most iconic cars in a celebration of his last F1 title and a tribute to the Jaguar XJR-15.

There will of course be off-track entertainment with food markets, fireworks, live music and much more.

Read our guide below to see what’s on, who’s driving and how to watch it.

Pre-’64 rear-engined Junior Formula cars will compete in this 20-minute sprint. With both drum and disc-braked cars taking part, it’s likely that the latter will win out. As a result, there will be a Taylor Trophy awarded to the highest-placed drum brake finisher.

This race will feature 500CC Formula 3 cars dicing it out in a 15-minute sprint. Powered by motorbike engines from the likes of Norton or JAP, this was the era that launched the career of Stirling Moss and many more from that golden age of racing.

Celebrating the first French GP, two-seater grand prix and voiturette cars from before 1933 will hark back to the pre-war era in the Earl Howe Trophy. Howe was a co-founder of the British Racing Drivers Club and the race is named in his honour. 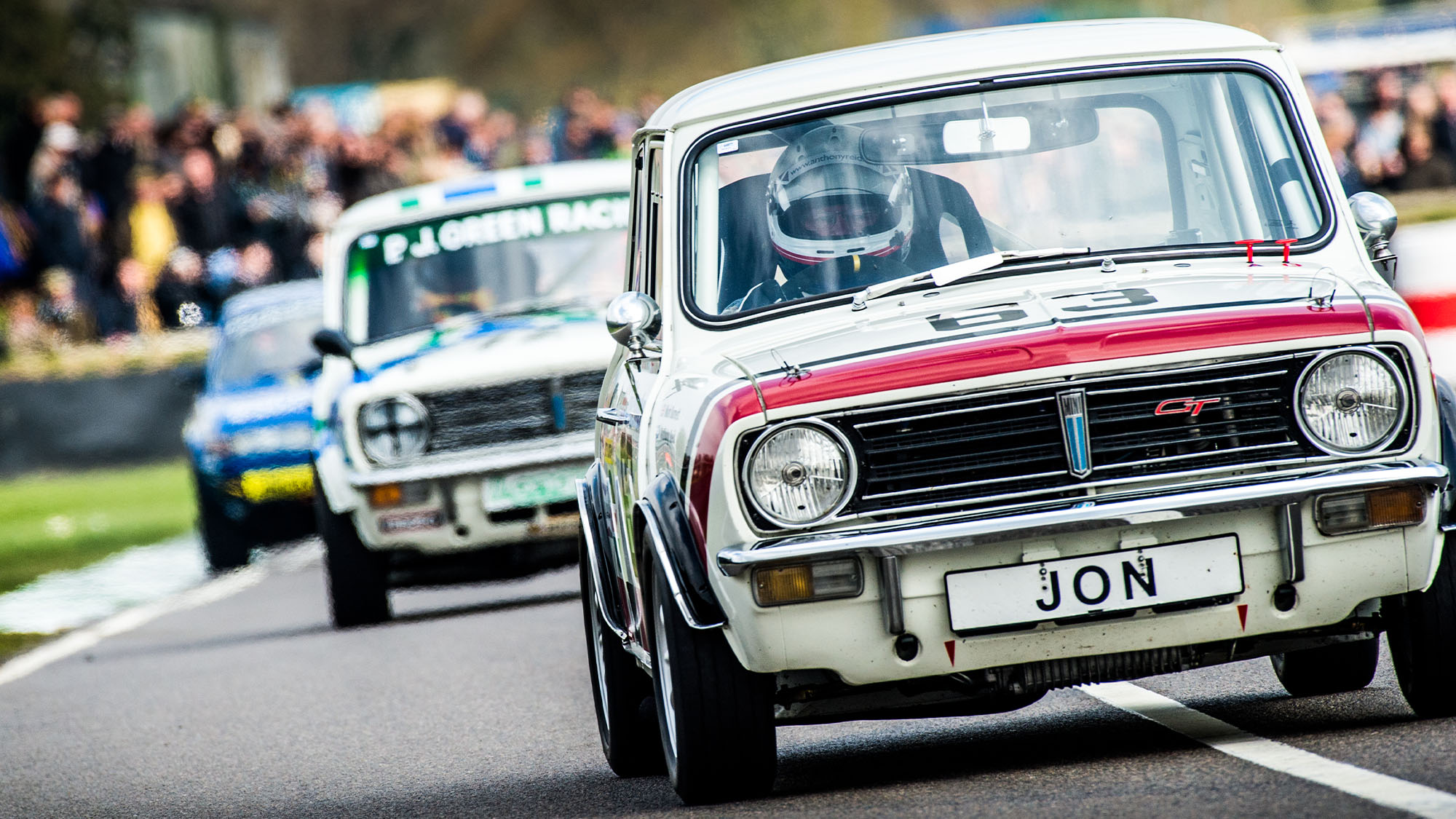 The tin tops are back

The Gerry Marshall Cup will bring the comforting sight of classic touring car machinery on track. Escort RS2000s, Triumph Dolomite Sprints, Ford Capris, Rover SD1s and similar will all be duking it out for top touring honours.

BTCC legend Steve Soper will be at the wheel of a Ford Capri, whilst Formula E and endurance ace Tom Blomqvist will drive a Rover 3500 SD1.

The competition will feature two heats (on Saturday) and a final (on Sunday), all lasting 20 minutes, with around 60 entrants expected in total. 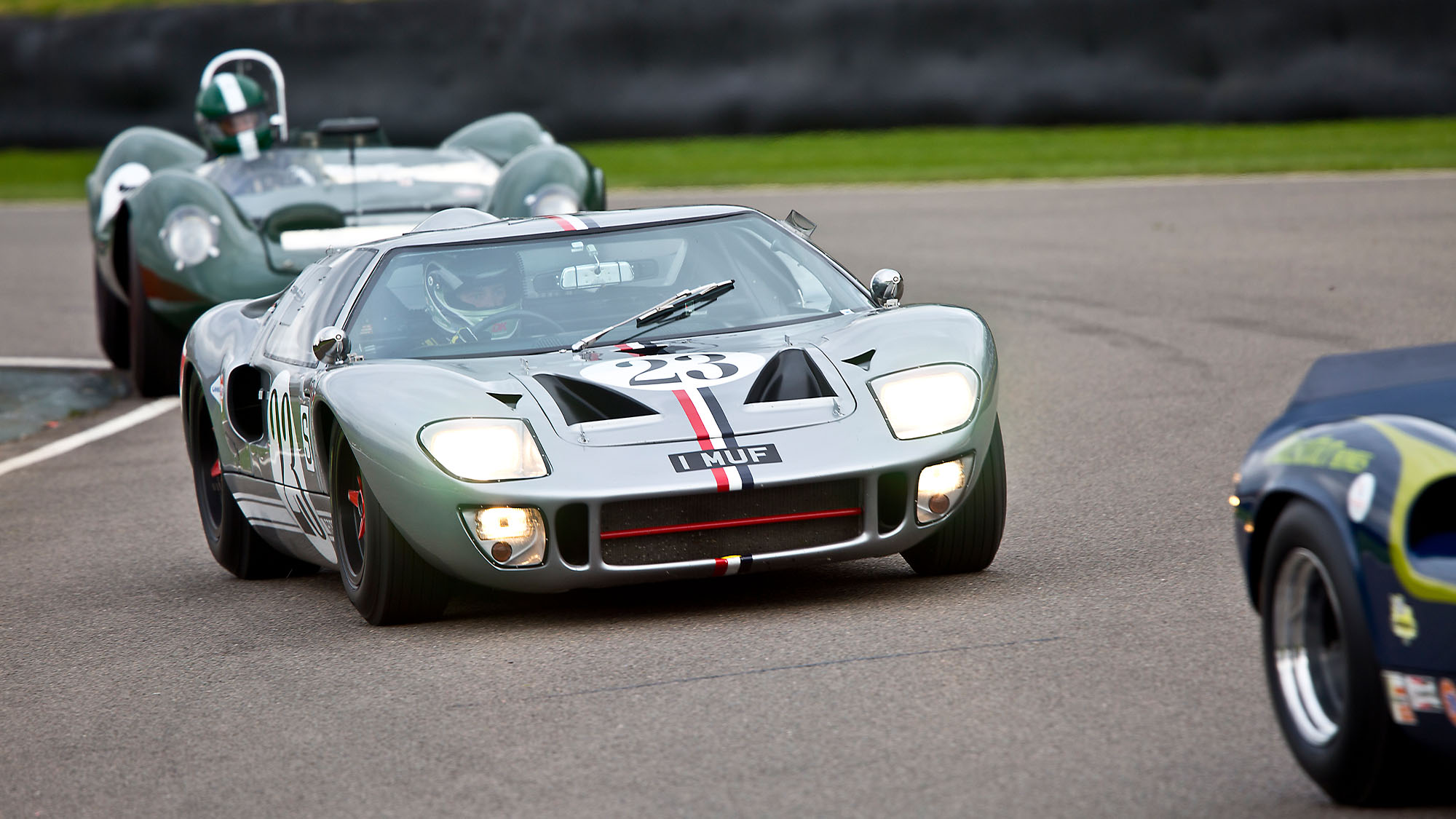 Dario Franchitti in a GT40 anyone?

Arguably the blue riband race of the event, the Gurney Cup is a showdown between prime sportscar prototypes from 1960-66. Ford GT40s, Porsche 906s, Lotus 23Rs and McLaren M1As will look to establish endurance supremacy in what will be the longest race of the weekend, held on the Sunday.

More than a few motor sport titans will be entered in heavyweight affair.

Le Mans legend Tom Kristensen will be in a Ford GT40, as will Emanuele Pirro and Porsche Formula E driver (and also three-time Le Mans champion) Andre Lotterer. Four-time IndyCar champion Dario Franchitti also gets behind the wheel of one of Ford’s finest, whilst Nicolas Minassian will pilot a McLaren-Chevrolet M1A. 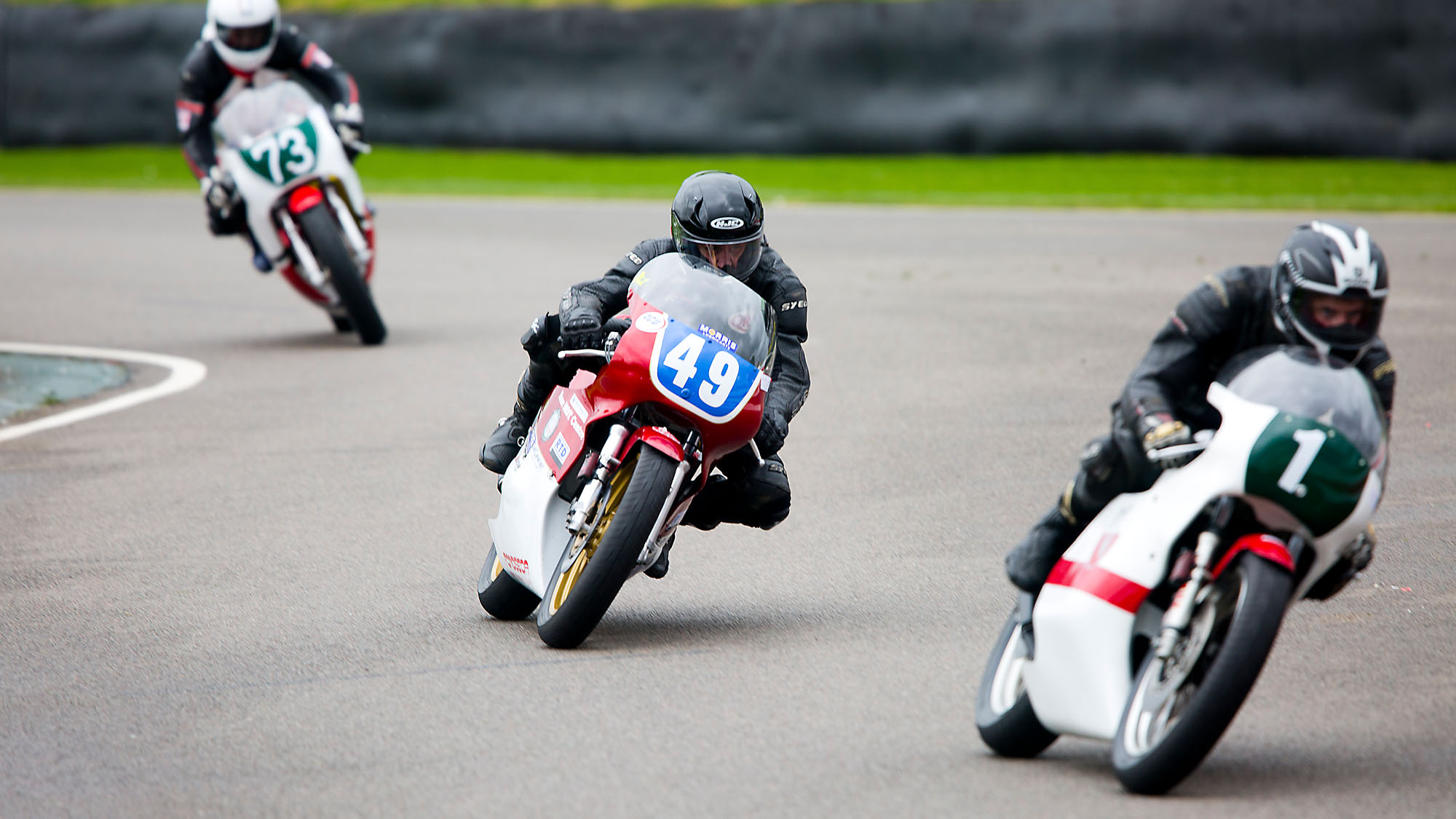 There will be vintage two-wheeled machinery as well as four

The only motorcycle race on the card at the Members Meeting is open to pre-1982 250cc and 350cc grand prix bikes. Also featured within will be the Sheene Trophy for F750 bikes from the early 1970s.

‘Mr Goodwood’ is honoured with the Moss Trophy for TT-derived closed-cockpit GTs and prototypes from 1958-62. We can expect to see AC Cobras and road-bodied E-types in this 20 minute blast round Goodwood. 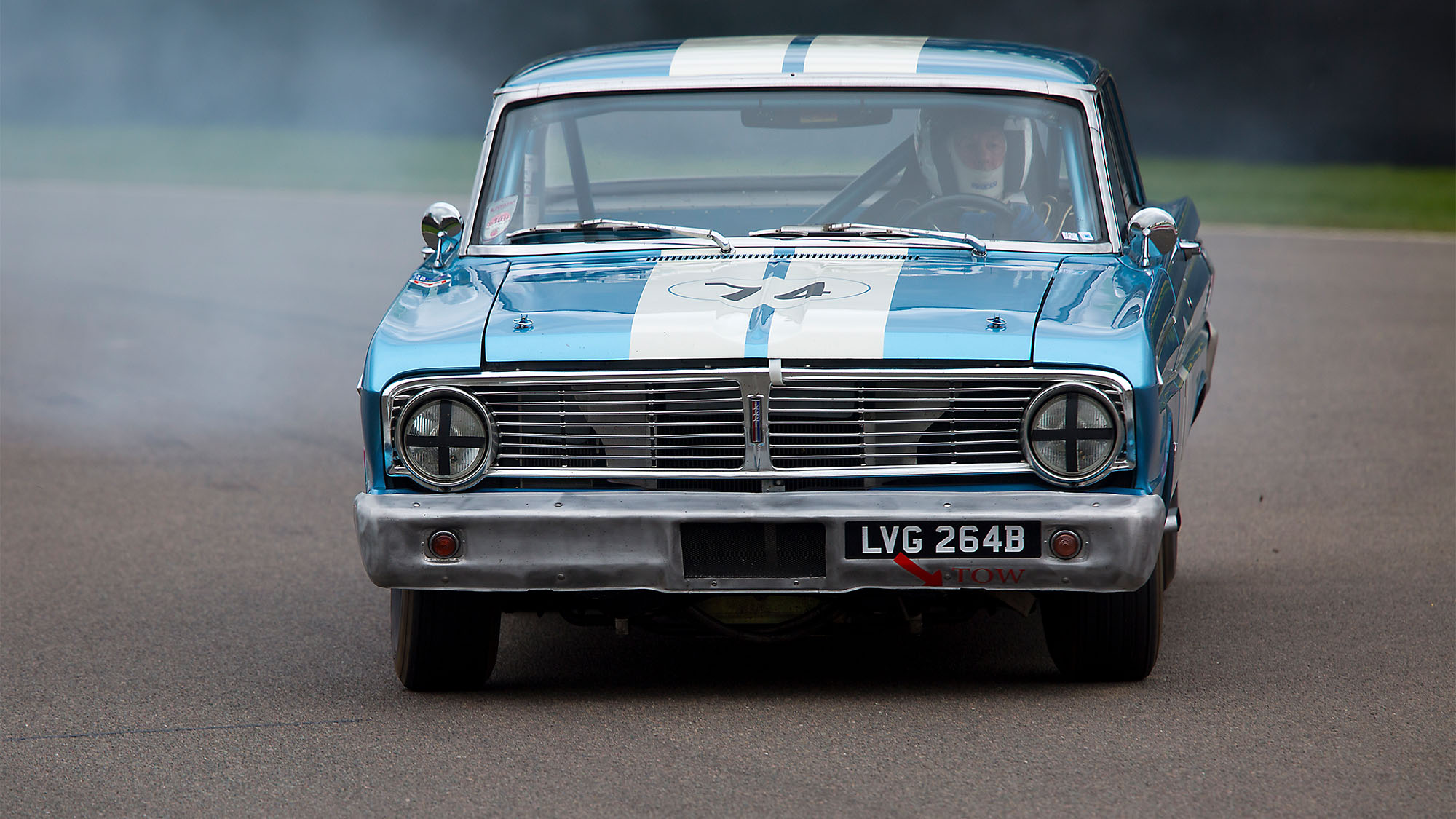 Slip-sliding away will be the Pierpoint Cup, which will feature pre-1966 saloons of the Ford Galaxy, Mustang and Falcon variety, plus Plymouth Barracudas and more. The fierce rumble of the V8 is likely to be heard far and wide.

This race, as well as the Gurney Trophy, will see a bevy of motor sport legends take to the track. F1 and endurance ace Jochen Mass will be driving a Mustang, as aforementioned messrs Kristensen, Lotterer and touring car champion Andy Priaulx also drive cars of the same model.

Pirro will take on a Falcon, three-time Indy 500 champion Franchitti enters in another Mustang and WRC legend Stiq Blomqvist pilots a Ford Galaxie. 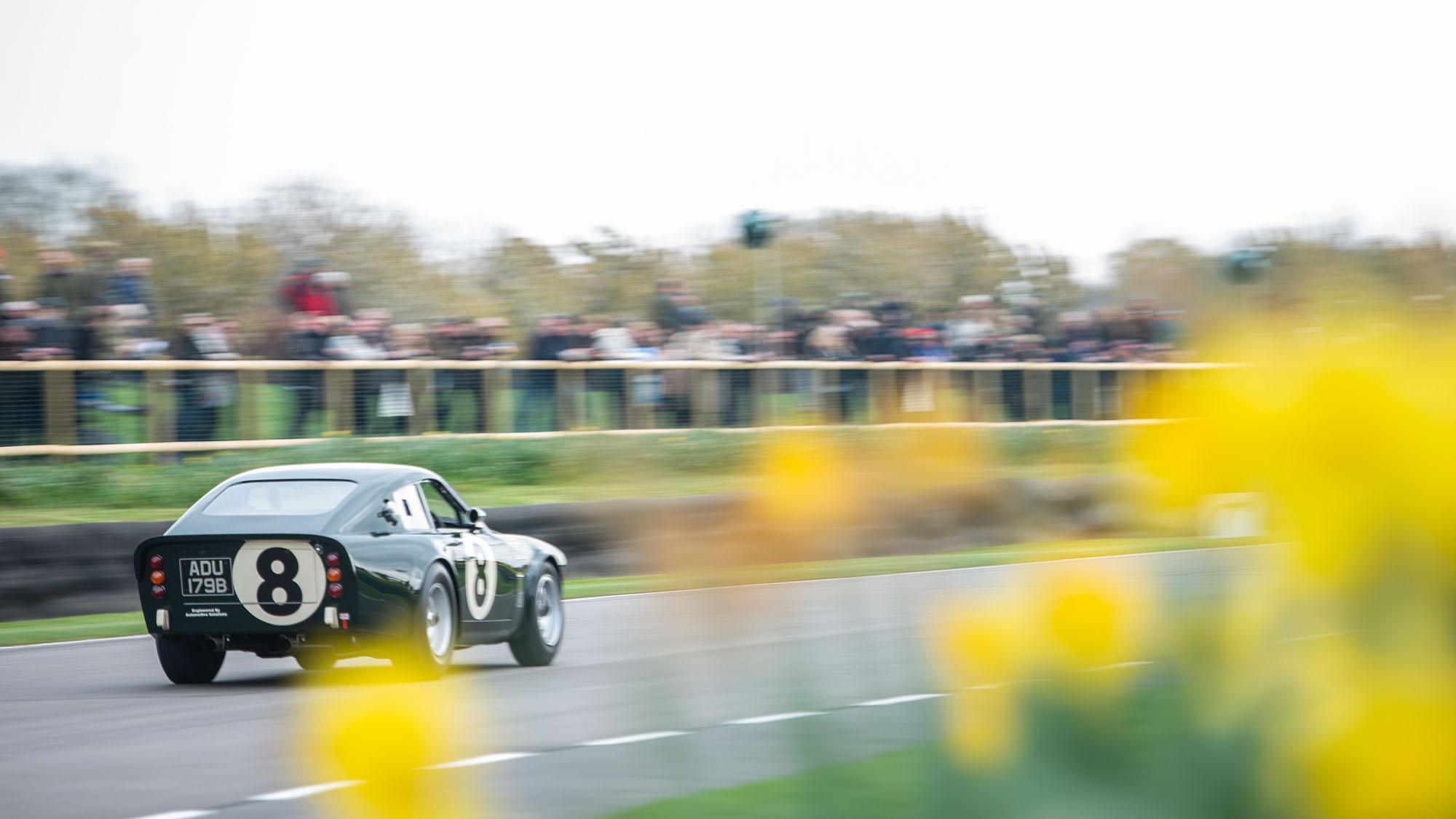 The most beautiful class of all?

The Ronnie Hoare Trophy, back for the first time since 2018, will pit both sports and road-going GT cars that competed internationally between 190-66 against one another. This aesthetically pleasing class will feature Triumph TR4s taking on Porsche 911 SWBs and Abarth Simcas, to name a few.

Of a slightly older vintage is the Salvadori race, open to sportscars from 1955-60, which means Jaguar D-types and Cooper T59 Monacos will be pounding round Goodwood in friendly competition. The best-looking race of the weekend? 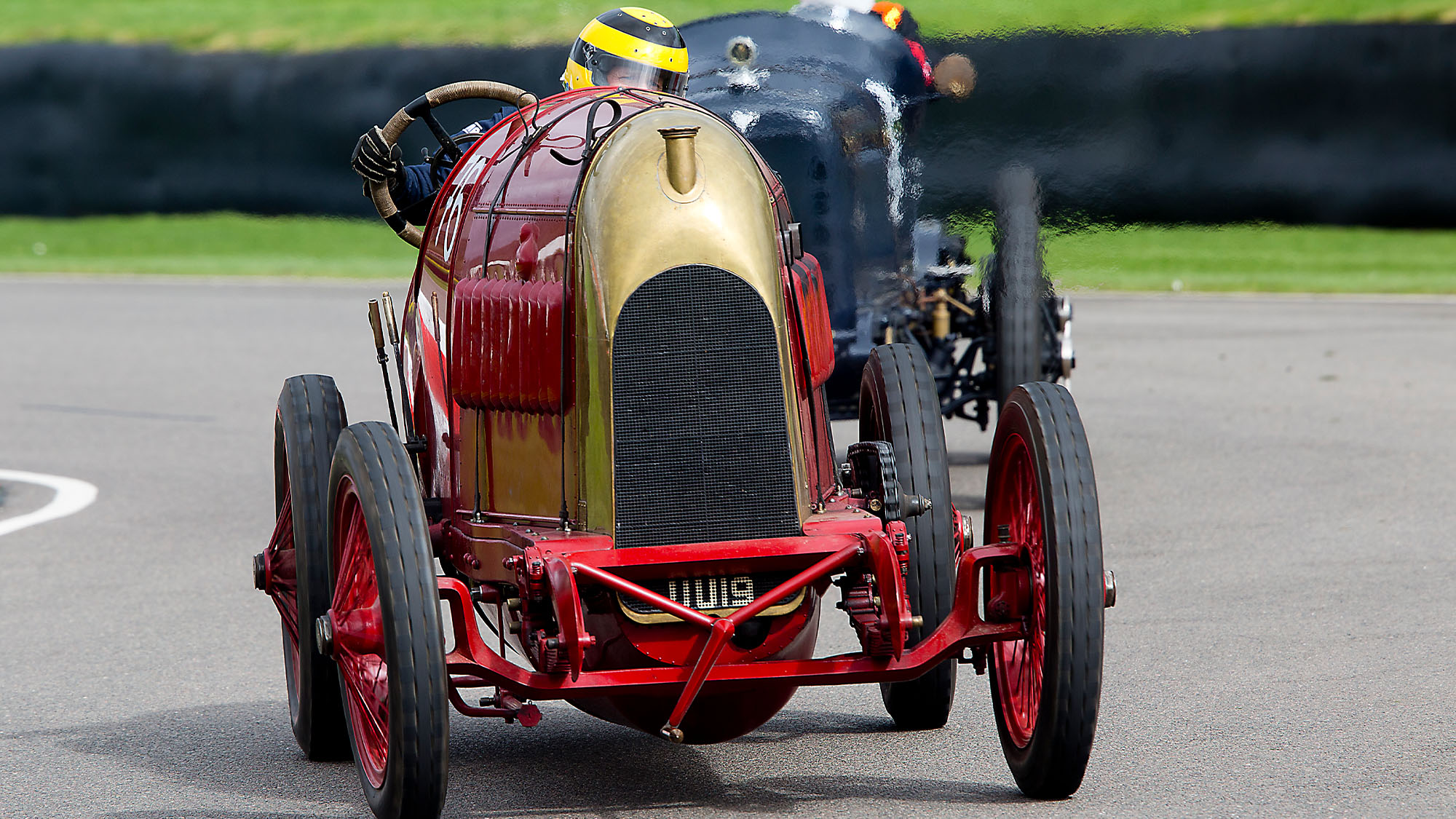 It can only be the SF Edge Trophy

Edwardian specials will take part in the SF Edge Trophy, cars made before 1923 being permitted. Two frenetic five lap races will be held, meaning drama and thrilling racing is almost guaranteed.

For the first time ever, the Members’ meeting will feature a Rally Sprint. First seen at last year’s Goodwood SpeedWeek, the course took in both large parts of the regular circuit and also perimeter roads.

Now it will again use parts of the circuit, then move onto service roads in and around the Chicane paddock and circuit café, before rejoining the track at Woodcote.

The event will first consist of two runs in one direction as dusk descends on Saturday. In the morning two runs will be held in the opposite direction, the winner being the shortest aggregate timer time across all the stages.

Now it will again use parts of the circuit, then move onto service roads in and around the Chicane paddock and circuit café, before rejoining the track at Woodcote.

The event will first consist of two runs in one direction as dusk descends on Saturday. In the morning two runs will be held in the opposite direction, the winner being the shortest aggregate timer time across all the stages. 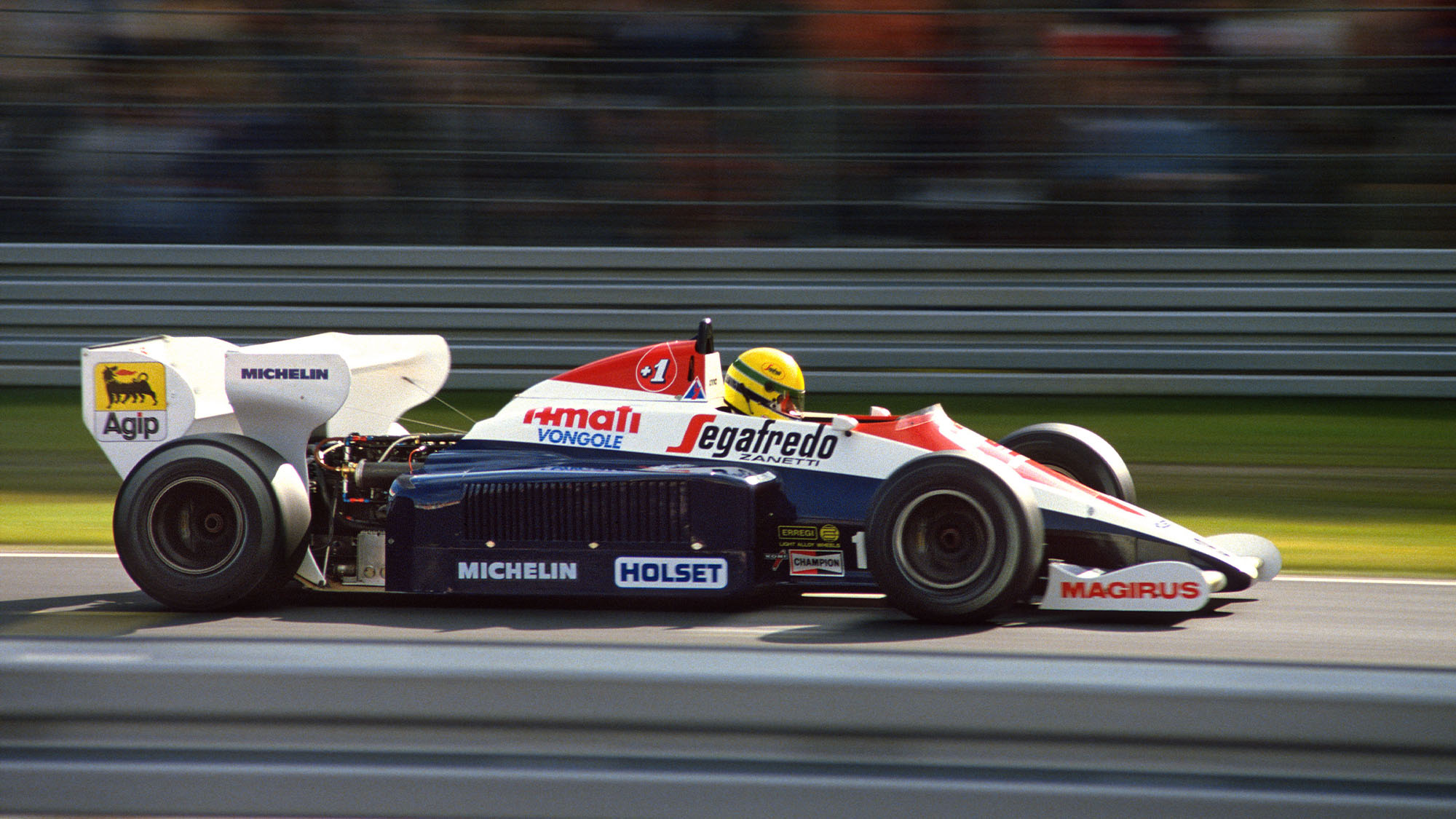 Significant cars from Ayrton Senna’s career will be shown

To celebrate the 30th anniversary of his last F1 drivers’ title, some of Ayrton Senna’s most iconic cars will be demonstrated. McLaren, Lotus, Toleman, Brabham and Williams competition cars that the legendary Brazilian raced and tested will run – with more to be confirmed. 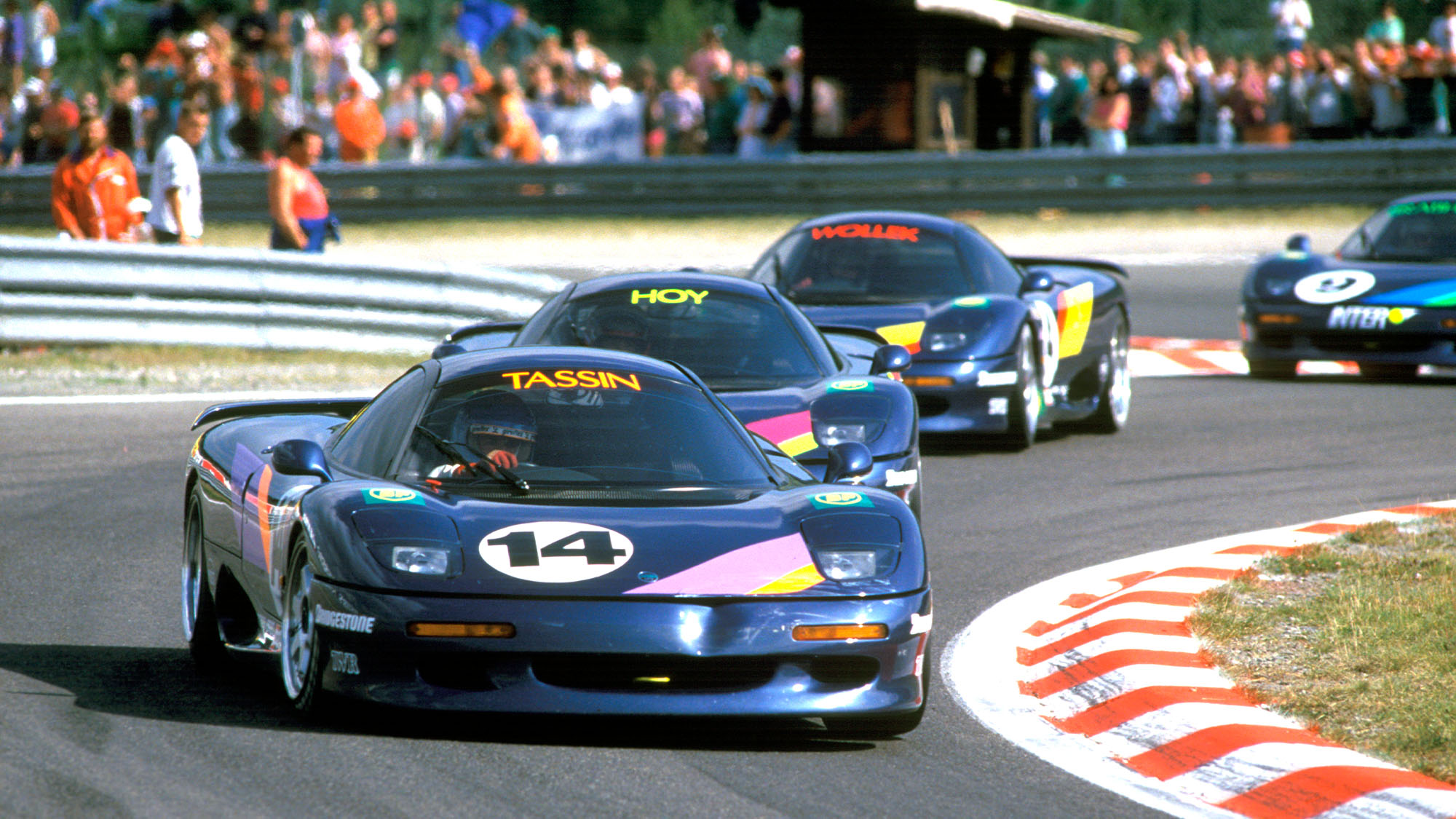 A tribute to the cult Jaguar XJR-15 will be held

The fabled Jaguar XJR-15 will be celebrated at Goodwood this year. Seen as one the greatest, if not the greatest, road-going sportscar of all time, the 6.0-litre V12 beast was based on the Le Mans-winning Jaguar XJR-9.

Earning its own one-make series in 1991 as an F1 support series, the championship featured drivers such as Derek Warwick, David Brabham, Tiff Needell and Bob Wolleck.

Only 53 were ever made, making it a rare and sought after car. 12 will be present at Goodwood, with an on-track demonstration each day. 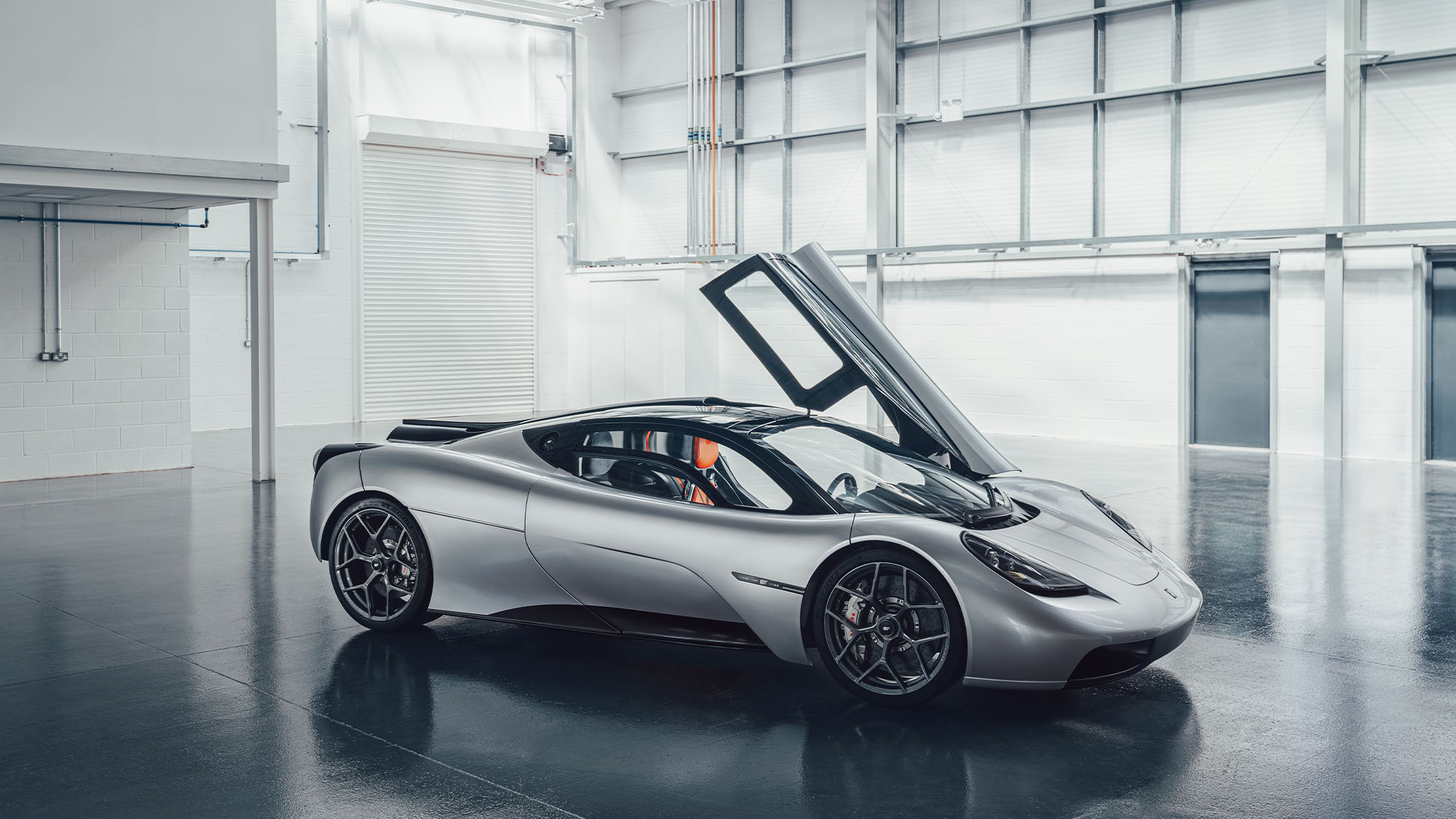 T.50 gets its “global dynamic debut”

As well as vintage race cars getting back to what they do best, the Members’ Meeting will also feature legendary car designer Gordon Murray’s new T.50 Hypercar making its “global dynamic debut” as it runs on the famous track. The former F1 design guru’s relationship with Goodwood continues, as his first production road car, the McLaren F1, was tested at the Duke of Richmond’s track.

Also running will be one of Murray’s Brabham BT49Ds, his Duckham LM-Ford sportscar prototype and his early IGM T4 effort.

Off-track there will be a static display of the T.50 Niki Lauda edition, designed for use on the track only.

How to watch the 78th Goodwood Members’ Meeting

Online streaming of the event will be limited to Goodwood Road Racing Club members only. For more information on how to stream, click here.

How do I buy tickets for the Goodwood Members’ Meeting?

Exclusive to a tee, only GRRC members of those who are part of the Fellowship can attend the Meeting. However, you can join the fellowship here.