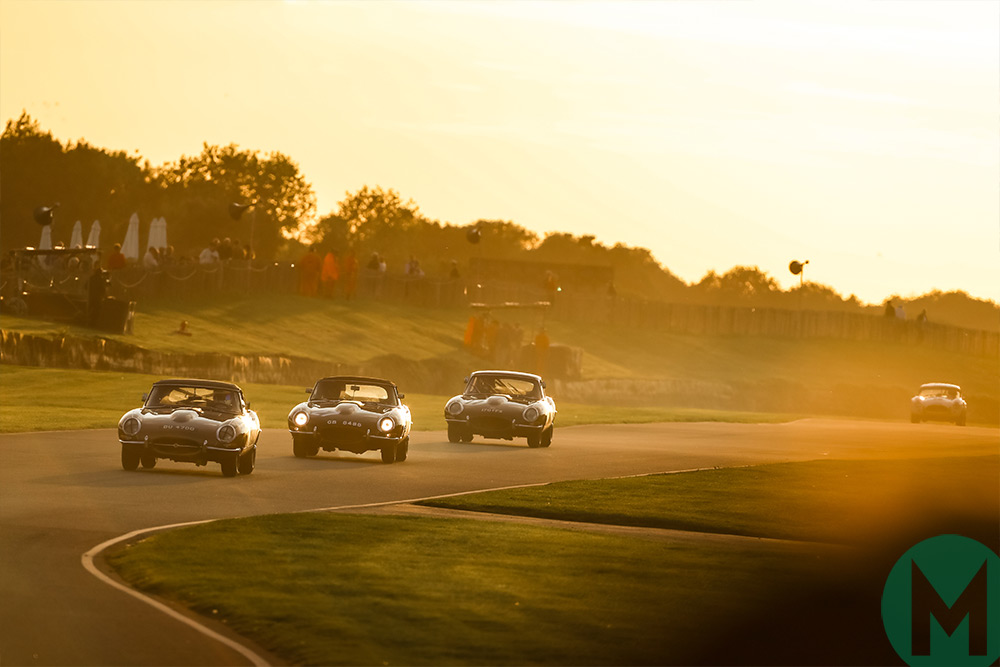 A few weeks back I was in the fortunate position of taking part in Goodwood Revival’s Kinrara Trophy. Aside from being touted as the most valuable grid of cars ever assembled (smart estimates put the combined value of the cars at between £120m and £200m), the joy of this race is that the cars are all very much road legal, with those remaining closest to the spirit of the Kinrara Trophy little more than fast-road specification.

My steed was an E-type Jaguar – one of the very earliest built, and part of a special batch built and released by the Jaguar Competition Department to the best teams and privateers of the day. Not only did this make ‘my’ E-type Roadster one of the most significant, but being one of the near-standard ‘originals’ entered in the race it afforded me the opportunity to experience top level sports car racing as it used to be.

It’s hard to imagine the 2018 equivalent of Jim Clark or Graham Hill racing near-standard sports cars, but that’s exactly how things were in the early 1960s, when privateer teams (with factory support) from Aston Martin, Ferrari and Jaguar did battle to promote their latest sporting road cars. Now we rightly revere such cars for their racing pedigree, but also celebrate them for their stock appearance and the modest suite of upgrades they received by way of race preparation.

It’s a style of racing that has very much fallen out of fashion with manufacturers, competitors and motor sport in general. It’s due almost entirely to the extraordinary success of GT3 and GT4, which have been brilliantly packaged around the Pro-Am model, whereby wealthy amateurs provide the funding and enlist the services of hot-shoe pro to race alongside them.

Ironically this Pro-Am recipe is really not so different from the 1960s, except back in the day the wealthy individual was perhaps more likely to provide funding and take their share of the limelight as entrant and team owner, rather than physically taking the wheel of a racing car themselves.

Where today’s GT racing is utterly different is in the extreme nature of the cars, which in the case of GT3 are developed to a point where they bear little relation to the road car on which they purport to be based. The racing is fast, fraught and incredibly close. It’s great business for those manufacturers that have large-scale in-house Competition Departments, not to mention the numerous independent GT teams that serve the countless GT championships around the world.

And there’s no question it’s great fun for the wealthy amateurs and a solid source of income for the pros.

So what’s not to like? Very little. Unless you’re an old romantic like me, in which case you still like to think of road-based racing cars as somehow being a genuine barometer of how the showroom-spec road cars’ capabilities.

Modern GT racing is a very, very long way from that and so, inevitably, is the challenge presented to the drivers.

The Kinrara is an hour-long two-driver race. Not long in GT racing terms, but long enough for a car like the E-type – known for being under-tyred and hard on its brakes in period – to require sympathetic driving. Having the ability to adapt and allow for extended braking distances and reduced traction while still going as quickly as you can is as essential now as it was then.

There’s craft to any racing, but racing lightly modified road cars and making them last the distance is something of a lost art in modern motor sport, but one that’s very much alive in historics. As an antidote to the compressed braking zones, enormous corner speeds and zero-slip angle angle discipline that modern racing demands I think it’s very hard to beat, whether you’re a driver or a spectator.

You can read the full story of ‘Dickie Meaden’s’ Jaguar E-type and Kinrara Trophy outing in the latest issue of Motor Sport, available from the shop in print and digital form.