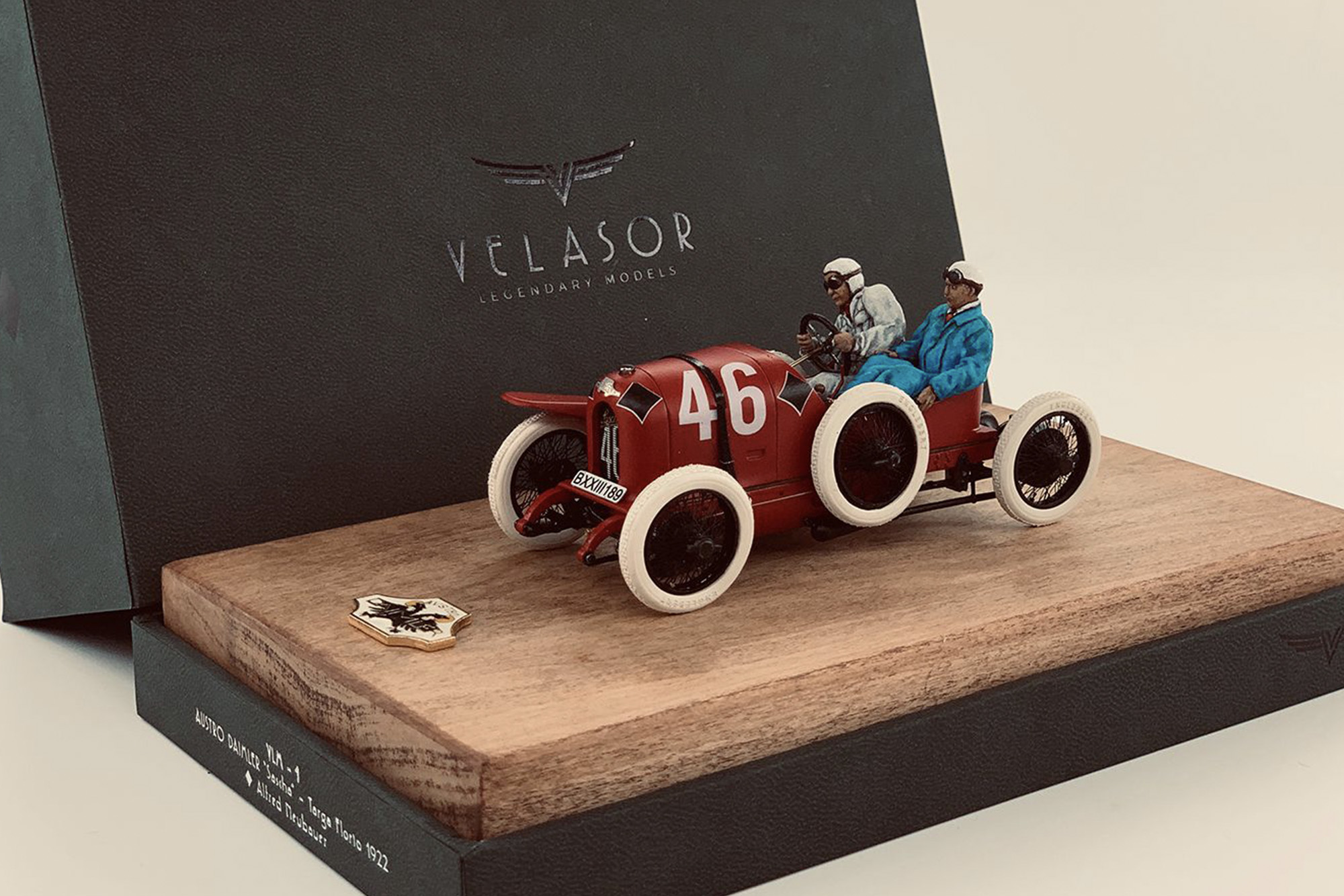 Slot cars usually err more on the side of durable than detailed, but Velasor’s 232-piece, hand-made models are mini moving artworks – that you really won’t want to crash.

The cars are built with materials including metal, leather, wood and resins, and include intricate moving parts, including engine covers that can be held in place with a strap and buckles; moveable shock absorbers; and rotating hand crank. The figures replicate the car’s actual drivers, and the interior contains moveable pedals and a handbrake lever. 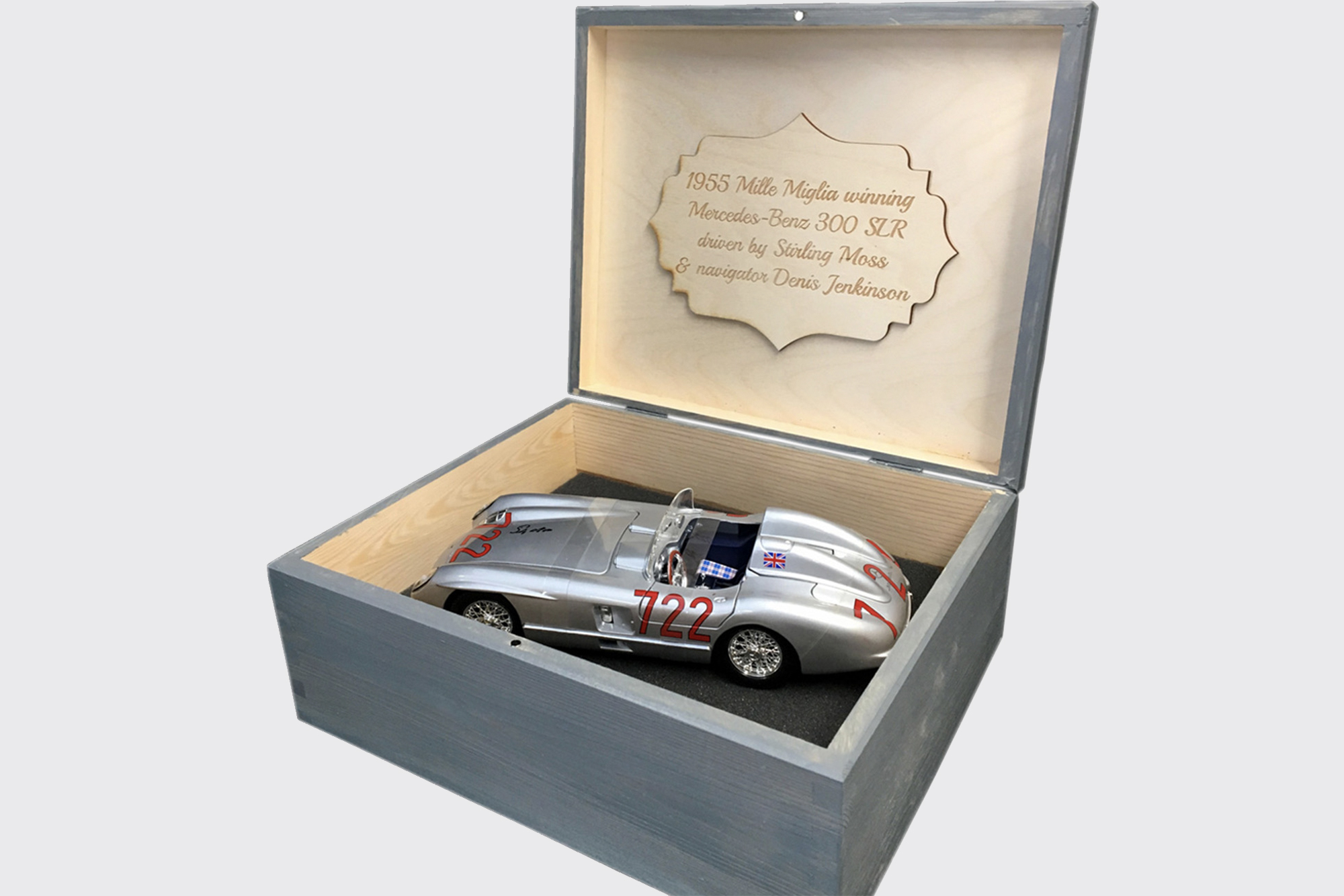 Stirling Moss and his Mercedes-Benz 300 SLR formed an unbeatable combination in the 1955 Mille Miglia, recording an overwhelming victory of more than 30 minutes over none other than Juan Manuel Fangio.

Sitting next to Moss was Motor Sport’s own Denis Jenkinson, in the pioneering role of co-driver and a crucial part in Moss’s crushing performance.

This 10in x 8in 1:18 scale model of Moss’s car No722 is signed by Sir Stirling himself and comes in a wooden, branded presentation box. 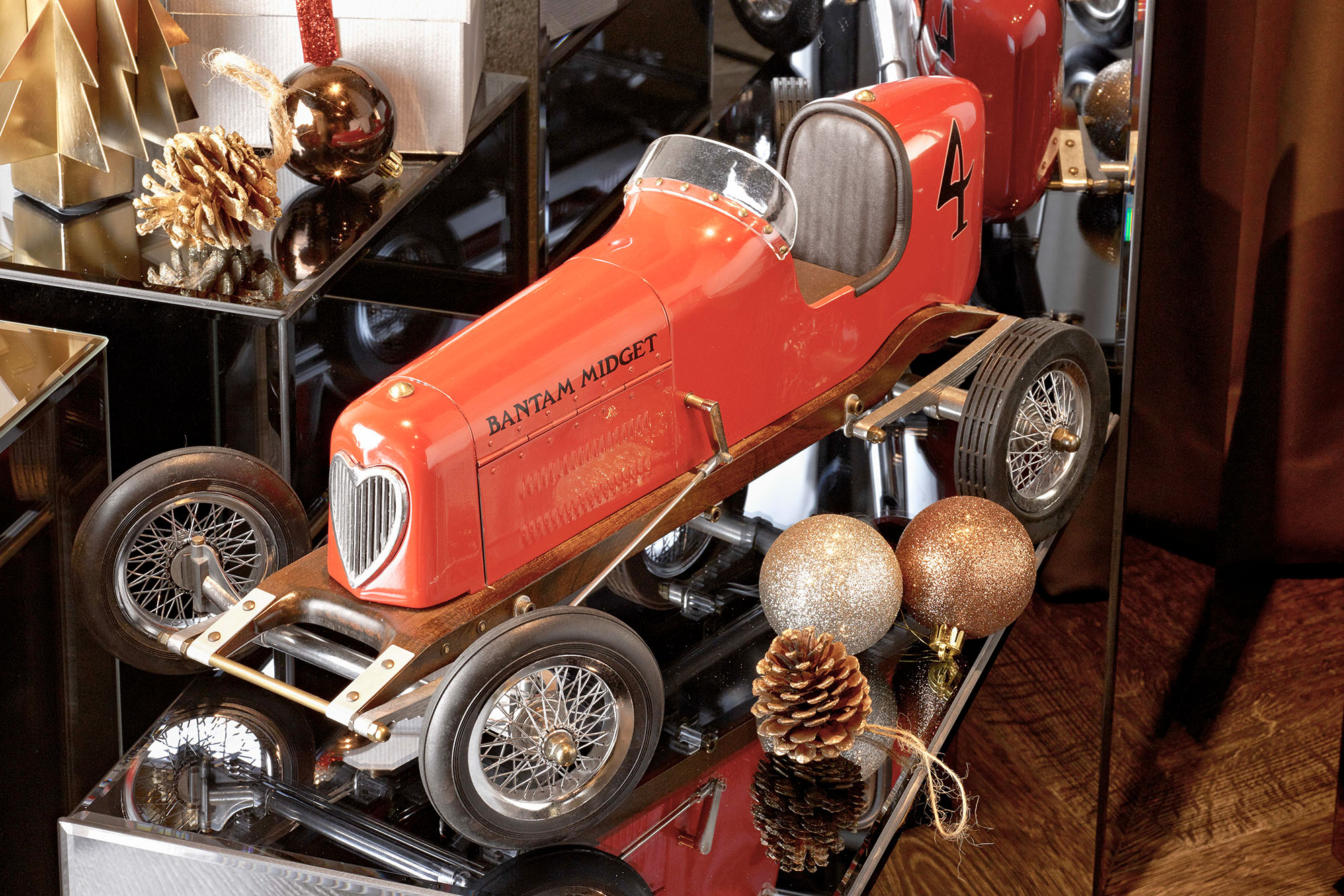 At 48cm long, this aluminium model will make a sizeable impression on any shelf. The Bantam Midget is a replica of 1930s ‘spindizzies’, which were fitted with a miniature engine and tethered to pole, allowing them to lap in circles at a ferocious pace,

This model is static, with a non-working engine, and is affixed to a wooden footplate. It’s built intricately, using hardwood, recycled aluminium, leather and brass.

In addition to the red-painted model pictured, a silver aluminium version is also available. 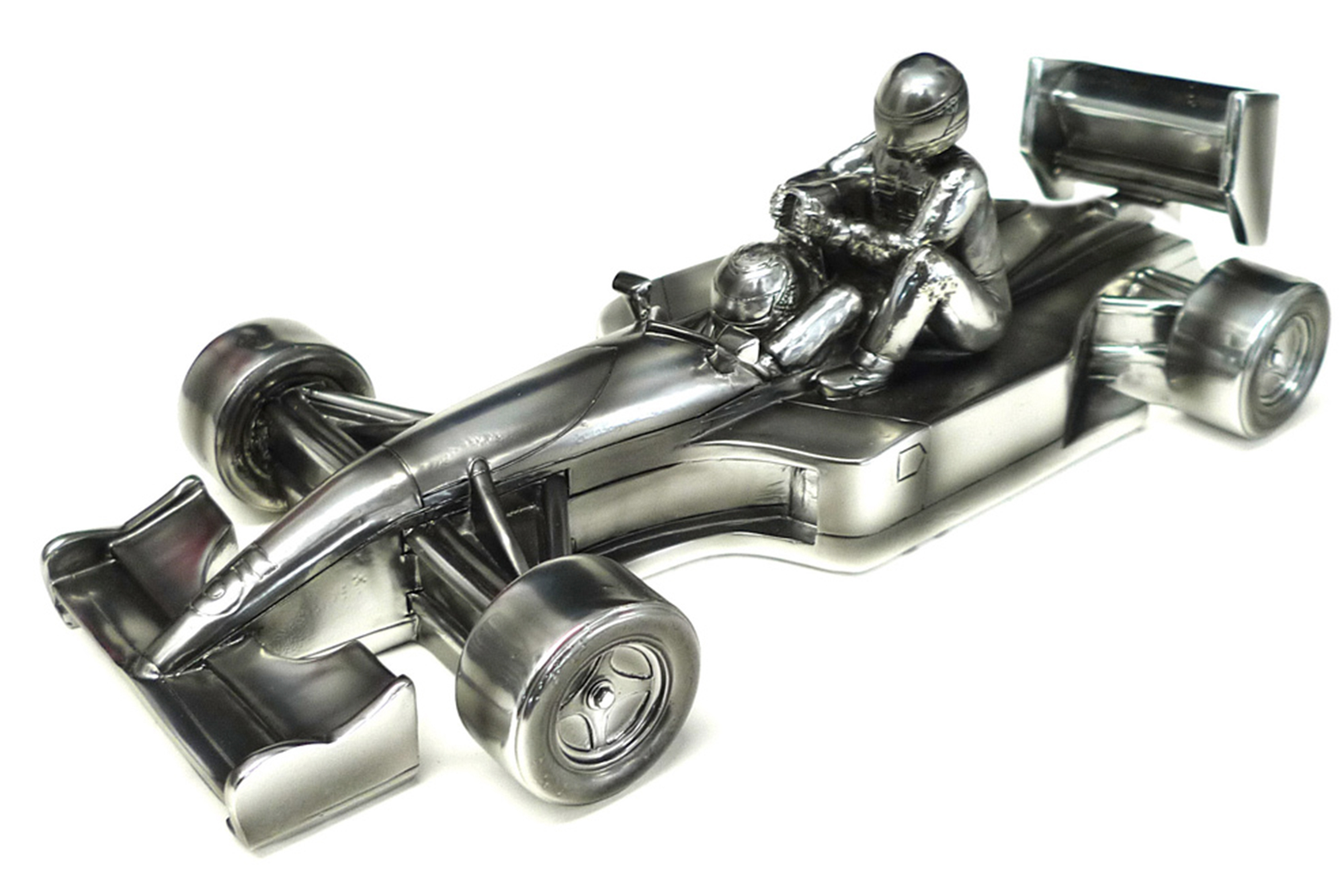 Nigel Mansell was victorious in the 1991 British Grand Prix, but it’s what happened immediately after the race that really sticks in the mind. On his slowdown lap, Mansell spotted a stricken Ayrton Senna, whose McLaren had expired at Club Corner. The british hero stopped and allowed Senna to climb on board for an iconic taxi ride that’s captured in this chrome sculpture that’s approximately 24cm long. 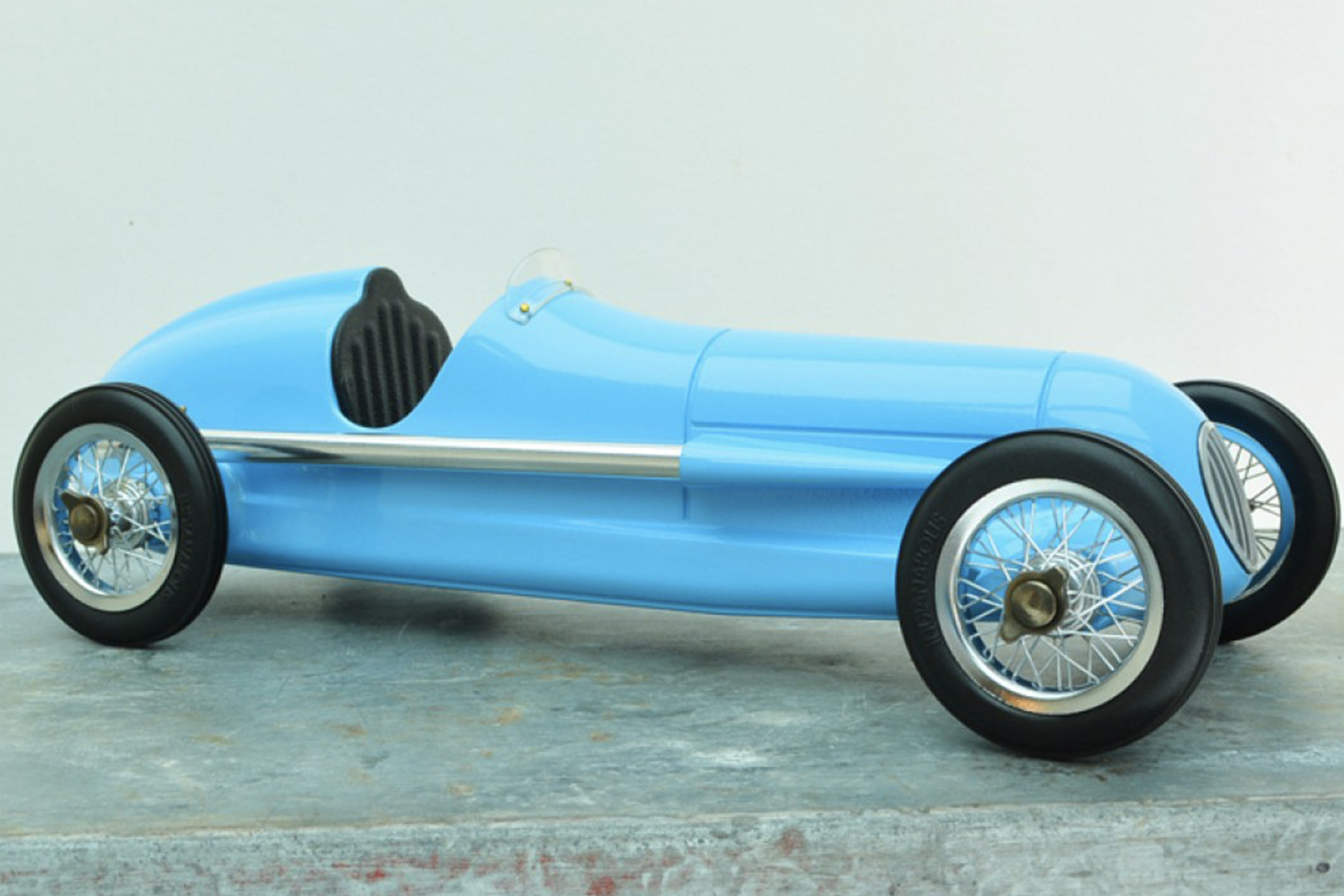 This 31cm-long desktop racer model is inspired by the design of 1930s ‘spindizzy’ tether cars, which reached incredible speeds with miniature engines.

There’s no motor in this model, but plenty to admire at a standstill, with a detailed dashboard, wire wheels and rubber tyres. The model in blue is striking, but there’s also a polished aluminium version available. 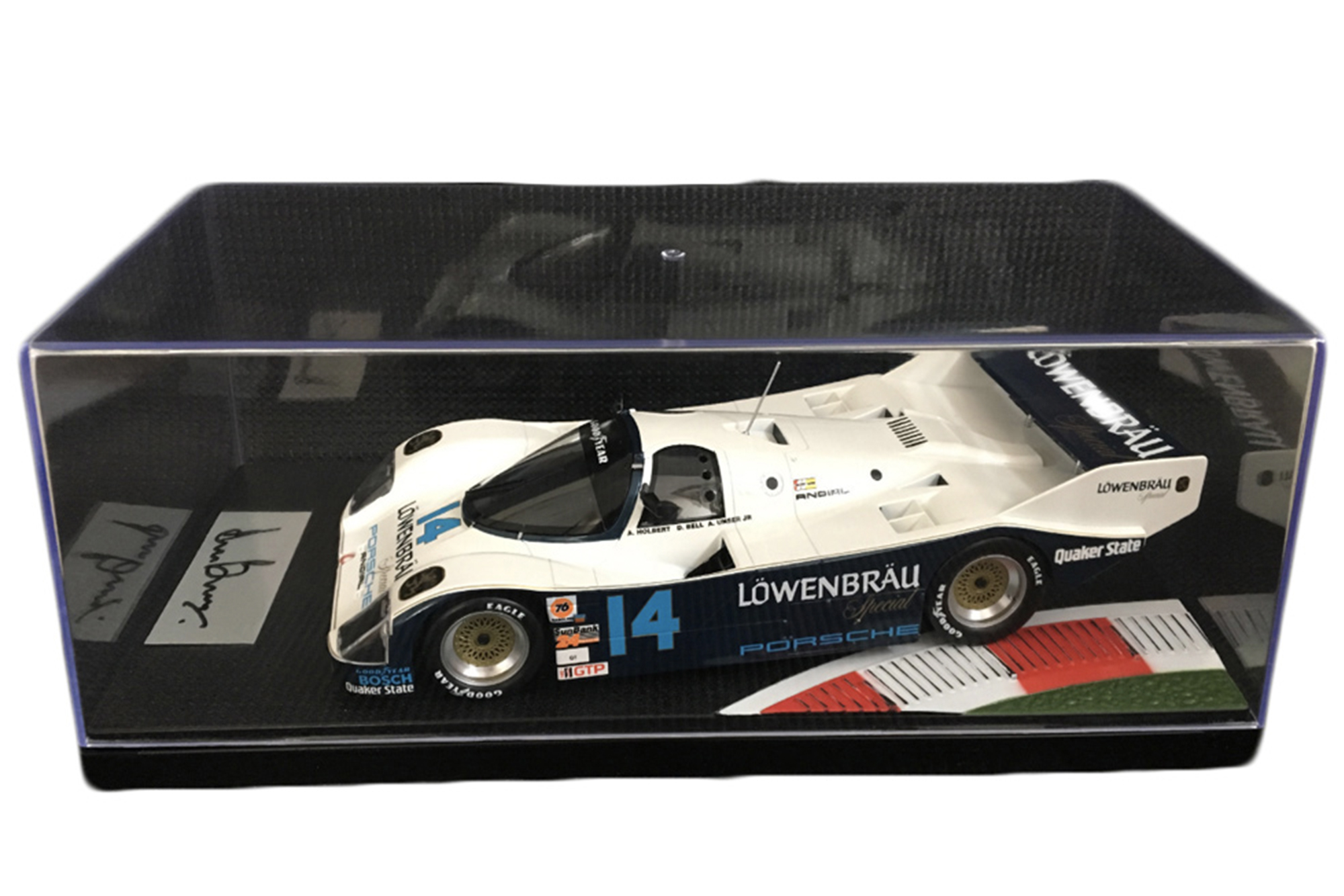 It pulled off an unlikely victory, after reliability problems left it 33 laps behind the leader with eight hours to go. Issues with the leading cars allowed it to close the gap, and Holbert swept into the lead wth just over an hour to go.

This 1:18 scale Norev model comes in a race case with a certificate of authenticity. 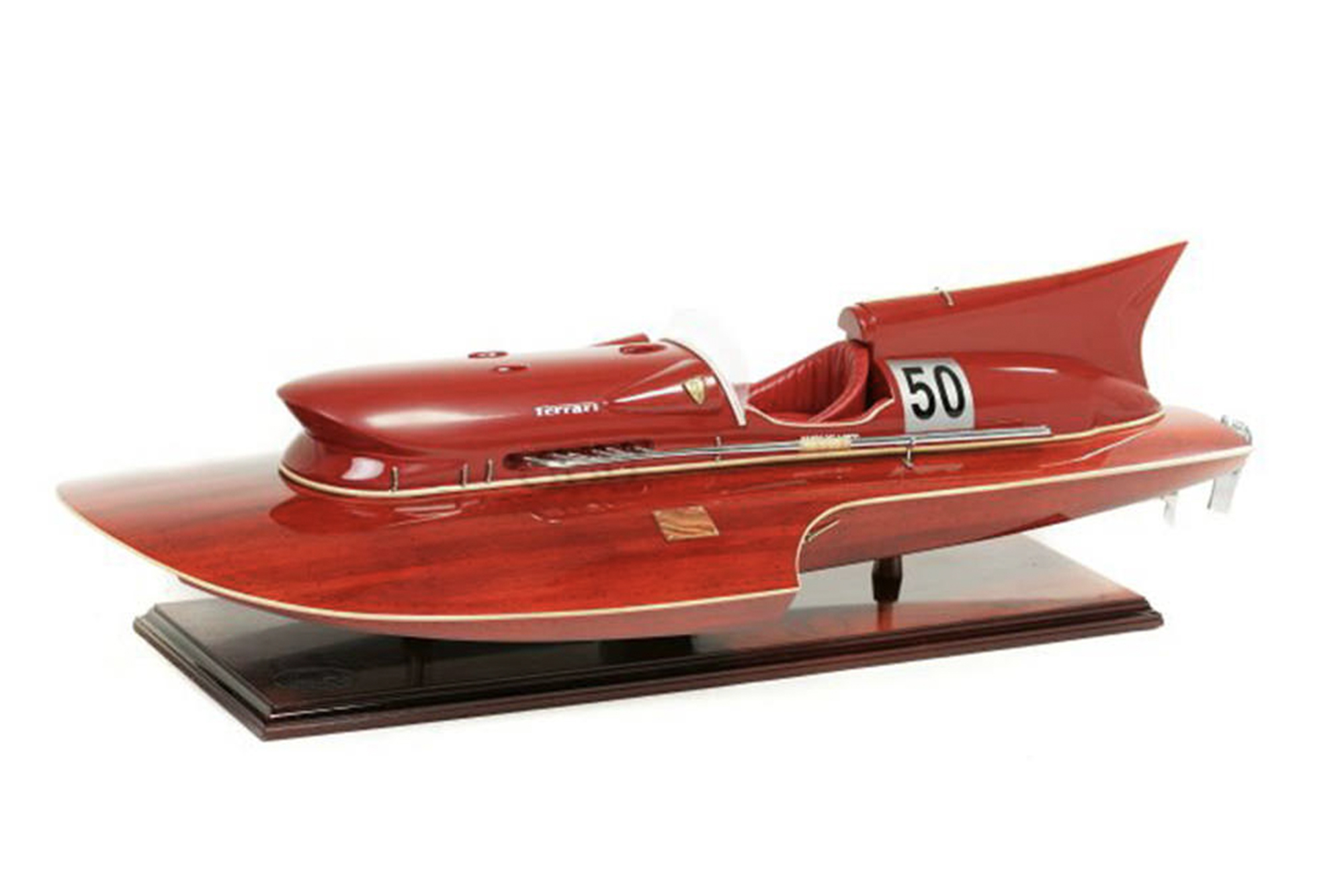 Powered by a V12 Ferrari Grand Prix engine, the 1953 Hydroplane produced 385hp, which was enough to set a world water speed record of 150.1mph

The original, commissioned by Achille Castoldi, a wealthy speedboat enthusiast, was built with mahogany veneer plywood, around a solid wood-framed structure. The model is also made in wood, with fine metal detailing, including an intricate cockpit, and rear propellor which, in the full-size boat, span at 10,000rpm.