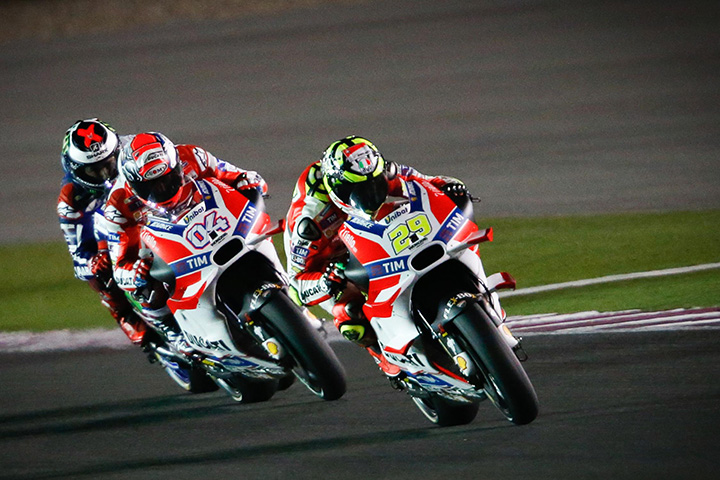 The subject of winglets, or strakes, or whatever you want to call the infernal contraptions, was a big talking point in the Qatari desert. Several riders including Valentino Rossi, Dani Pedrosa, Cal Crutchlow and Bradley Smith voiced their concerns; not so much their worries that a strake may hook a rider and cause a crash, but rather the scary effect they have on motorcycles following in their draft at high speeds. It seems the dirty air behind a winged Ducati moving at over 200mph lifts the front of the chasing motorcycle, causing a severe wobble or worse. Pedrosa had possibly the scariest moment chasing a winged Duke at Phillip Island last year, at around 211mph/340kph. “You lose front [tyre] contact and you lose control, so the front is shaking and you go into a weave. It’s not a good thing.” Smith has also had a few frights. “The bike starts to shake, like it goes light,” said the Tech 3 Yamaha rider. “The bike actually shakes and vibrates, which at 210mph, just before you go for the brakes, isn’t the best thing. It also seems to be that when we’re braking behind a Ducati there seems to be some turbulence, like you get into a pocket of air which hits you back. It just seems bizarre. “I brought this up last year after Aragon and everyone laughed at me; they said they didn’t know what I was talking about, but now they feel it. It feels dangerous, that’s why I brought it up. I know Race Direction have analysed video footage and they’ve deemed the wings to be okay, but with more and more riders complaining, we’ll see what happens. I hope a big accident doesn’t happen, but unfortunately they don’t seem to be doing enough about it. “I think they should get rid of them now. For me it’s one more thing on a motorcycle that could potentially get caught up with another rider, especially with the Ducati having them top and bottom. Riders have complained they’ve been hit by them, so if riders deem them to be unsafe, why not call it now? “And while we’re cost-saving in terms of engine limits, electronics, testing and so on, we should call it a day before it spirals out of control and every manufacturer has to invest.” 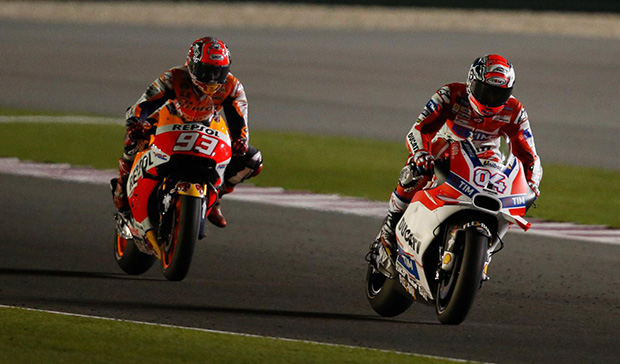 Winglet R&D could soon become a cost for all factories, because it may not be pure coincidence that the first two bikes over the line on Sunday wore huge wings. And it may not be coincidence that Honda’s biggest issue in Qatar was lack of acceleration onto the start/finish. Wings are designed to improve acceleration by increasing front downforce, thereby reducing the need for wheelie control, which reduces torque and thus acceleration. I wouldn’t at all surprised if Marquez’s Repsol Honda grows bigger wings very soon, even if Honda is worried about the costs. “Wings are technically quite interesting but the development cost is huge,” said HRC vice-president Shuhei Nakamoto, who knows about aero R&D because he ran Honda’s Formula 1 project. “The average cost of a wind tunnel is 150 million Euros (£120m/$170m), so if everyone starts wing development we will need a tunnel. Then the usual working style of a wind tunnel is seven days a week, 24 hours a day, then stop for half a day each week for maintenance. So for each 24 hours you need three teams of a minimum of ten people each, plus you need an air conditioner, a super computer and so on; in addition to the 150 million Euros.” There is good news. Dorna and the teams’ association International Road Racing Teams Association (IRTA) hate wings on cost and safety grounds, so there is every chance they will be banned at the end of the season. Wings have already been banned in Moto2 and will only be allowed in Moto3 this season, during which teams are only allowed one aero update anyway. “We are going to nail wings eventually, but we can’t nail them immediately because some factories have already done a lot of development,” said Mike Trimby, General Secretary of IRTA. “The Grand Prix Commission has told the Motorcycle Sports Manufacturers’ Association to come back with some ideas by Assen. We would like to ban them from next year, unless all six manufacturers come back with a counter proposal for a wing that is safe and reasonable and justified. But a ban will have to wait until next year… unless there’s an accident.”