First in a series looking at the lessons learned by each MotoGP factory in 2017 and their plans to be faster in 2018. This week, Marc Márquez’s chief engineer Santi Hernández discusses Honda’s RC213V 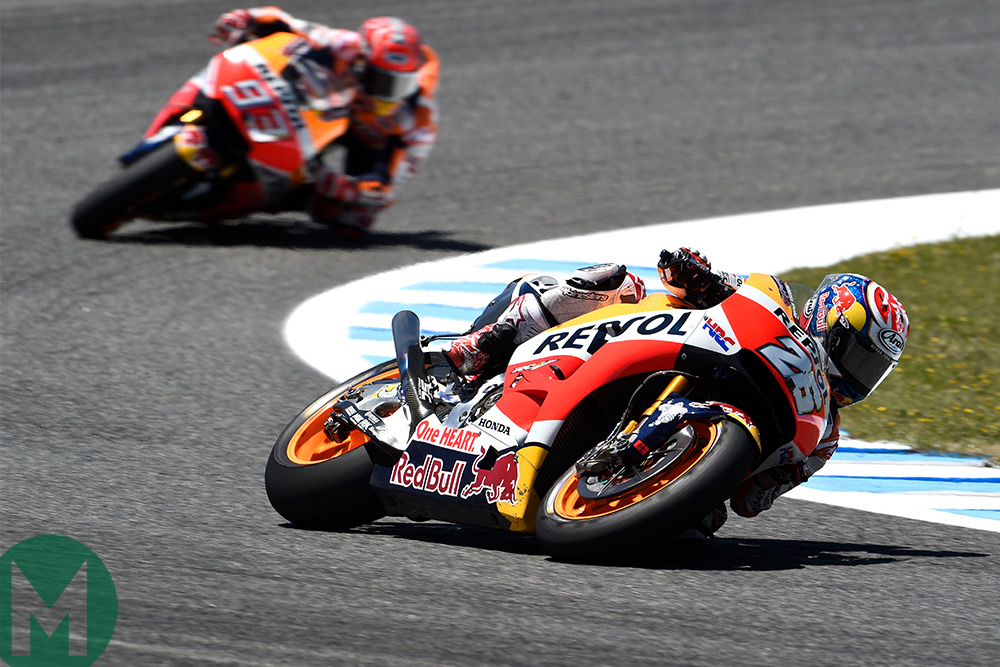 If you look at the MotoGP gongs that Honda has won over the past seven seasons – six constructors’ titles and five riders’ titles since 2011 – you’d think the company wouldn’t have much to do for 2018.

But, of course, HRC has plenty to do for 2018. Two years into MotoGP’s new tech era, none of the manufacturers have fully got their heads around the control software and Michelin tyres. And that includes HRC, which has probably made bigger machinery changes than any of the major factories over the past two years.

In 2016 HRC changed the RC213V’s crankshaft rotation from forward to backward to improve turning and reduce wheelies, to offset the effects of lower-tech wheelie control. Last season HRC switched to a big-bang engine that improves grip, to counteract lower-tech traction-control.

This is one reason Marc Márquez didn’t hit full form until halfway through 2017; he took only one victory from the first eight races and five from the last 10.

“The first part of last season was more like development,” says Márquez’s chief engineer Santi Hernández. “For the rider, everything changed, so it was difficult for Marc to understand the new engine character.”

A big-bang engine feels very different to a screamer engine – it’s a bit like switching from an inline four to a v-twin; everything seems to happen more slowly, to the extent that the rider feels like he is riding more slowly, even if the stopwatch tells a different story.

“When the rider jumps to a smoother engine he doesn’t feel he is fast because the power delivery feels completely different to him and to the rear tyre,” adds Hernández. “Marc had to understand many things because even though he felt he wasn’t faster, the lap times were coming.

“We all had to work very hard to understand many things, because our electronics were completely out at the start of last season. First, we struggled in 2016 when we changed from Honda software to Magneti Marelli, then just when we began to understand that, we changed the engine for 2017, so we had to understand the electronics with the screamer. It was hard, but I think it was a good idea, because the big bang gives to the rider some things we often struggled with.”

The big bang has mostly, but not completely, changed the RC213V for the better.

“In 2016 we really struggled with grip at maximum angle, that was our weakest point,” explains Hernández. “It was very difficult for Marc to open the gas at full lean because the engine was too aggressive. The big bang helps because it gives the rider a better connection with the gas, so he has a better feel between torque delivery and tyre grip.

“With the screamer Marc had no mid-corner grip, so he had to brake, turn, pick up and go. Now he has more grip because the engine is smoother, so we changed the set-up to take advantage of that, so he can use more corner speed. Marc is still very strong in braking, but not like before, because we changed the set-up for corner speed. Like always, you need to sacrifice some good points.”

Improved rear grip did give Márquez one other difficulty last season. “If you get more rear grip, for sure you push the front more, so you struggle more with the front,” adds Hernández. Maybe that’s why Márquez had so many crashes – 27 from 18 races.

It took Repsol Honda until midseason to feel fully on top of the new engine. “That was when we started to have our base, so we could arrive at each circuit and prepare for the race as during a normal race weekend. From then on Marc told us he felt like he could manage, and he knew what he needed from the electronics and the chassis, because we had to work a lot on the chassis.”

Then, just as Hernández and his crew were adapting to the big bang, along came another big change. At Mugello, Michelin switched the construction of its front tyre. There’s probably no bigger change for a bike racer than a change of front construction, because this transforms the feeling that’s most vital to a rider’s quest for fast lap times: corner-entry feel.

“We had many challenges at the start of 2017: new engine, new front casing, adapt the electronics; then at Mugello we went back to the front casing we had used for the first time in the Valencia 2016 race. It was difficult to set up the bike for the new engine and then for a new front tyre, because you have many question marks: if you have a problem, does it come from the engine or from the tyre?”

The crucial moments of 2017 for Repsol Honda were tests at Brno in July and at Misano in August.

“We changed the bike a lot, especially weight distribution,” says Hernández. “During a race weekend you have no time for that kind of thing. We were able to try some extreme changes, which is important, because when you make big changes the rider can really feel the difference and then you can find the right direction. We changed the geometry to put more weight on the front for the harder tyre casing.”

After the Brno test Márquez was in the fight for victory at nine of the last 10 races. The only race at which he didn’t challenge for the win was Sepang, where he opted for some safe points on the rain-soaked track.

Team-mate Dani Pedrosa had a tougher time in 2017; for the usual reasons: at 51kg the former 125 and 250cc world champion weighs 14kg less than the average top-ten MotoGP rider, so he will always be at a disadvantage so long as he has to use the same tyres as his weightier rivals.

Pedrosa is reminded of this fact whenever he compares his data to the data of other Honda riders. “If we check the data, the numbers are much uglier,” he says, miming the dramatic ups and downs of the curves with his hand. Nevertheless, Pedrosa scored more podiums than anyone else last season, apart from Márquez. (Márquez took 12; Pedrosa, nine; Andrea Dovizioso, eight; Maverick Viñales, seven; Valentino Rossi, six).

HRC is already working on improvements for 2018. “Like everyone, we want a faster bike, with more stability and less wheelie, and with more grip and better tyre life!” grins Hernández.

Once upon a time, Honda was always top of the top-speed figures, but in recent years the company has spent some of its speed advantage on improving power delivery.

Hernández believes that HRC is finally turning the corner on straight-line speed, following major problems in 2016, when the addition of the jackshaft required to change crankshaft rotation sapped a significant amount of horsepower.

“We are now closer to Yamaha on speed and acceleration, but still a long way behind Ducati. They are very strong on acceleration, especially in fourth, fifth and sixth gears; which is where we lose out. Sure, it’s better to have more horsepower and torque, but now we are trying to take advantage of our better corner speed for more exit speed. But we still have too many wheelies, even in third, fourth and fifth gears. When you get wheelies, the wheelie-control software cuts the power, so you lose acceleration.”

So far Honda has raced with the most conservative aerodynamics in MotoGP, which might be one reason Márquez and other RC213V riders suffer so much with wheelies, because front-end downforce and front-wheel lift are inextricably linked.

HRC must surely be working on this right now. It will be interesting to see if Márquez turns out at Sepang in late January with a new kind of radical aero that will rival Ducati’s. And look better.

Related: Márquez: the ledge beyond the edge