Mat Oxley’s account of his foray into the biggest race on the endurance calendar: the Suzuka 8 Hours 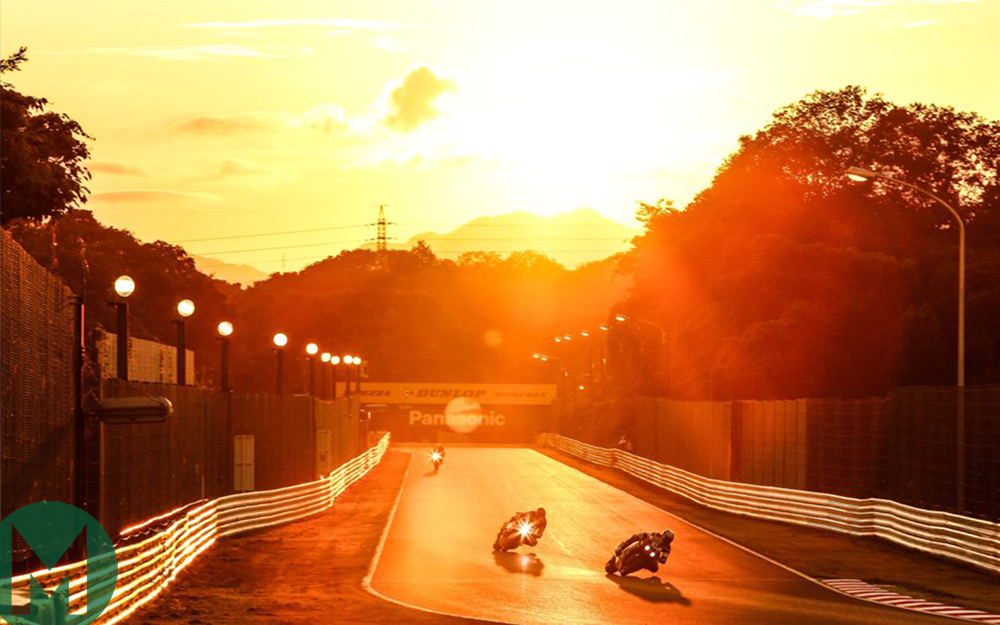 The weather is typical of Japan in July: so steamy hot that the air you breathe feels second-hand and rivulets of sweat run down every part of your body.

I shouldn’t care though: I am lying on a couch with two women draping nicely chilled towels across my legs and torso. I have an ice-cold drink in one hand and a bowl of sliced orange and banana within reach of the other. A Japanese doctor massages my body and an electric fan blows a cooling draft at my face, rustling the leaves of the nearby palms.

Heaven surely couldn’t be a much more delightful place but the pleasure of this visit through the pearly gates is tainted by the knowledge that soon I must return to the fiery torment of hell.

Hell in this case is the Suzuka racetrack, created back in 1962 by some fiendish designer, obviously intent on giving racers sleepless nights well into the next millennium.

The circuit is tough enough in itself but it’s the viscous Japanese summer that turns the Suzuka 8 Hours into bike racing’s Dante’s Inferno. As you get deeper into the race, the ogres of physical and mental exhaustion grow like monsters before you and devils dance around, laughing hideously at the sight of a mere mortal venturing into their terrible territory.

The exhaustion isn’t exactly tangible but the devils certainly are. They are dressed in colourful suits, mounted on 145 horsepower motorcycles and their names are Wayne Rainey, Kevin Schwantz, Mick Doohan, Wayne Gardner, Christian Sarron, Kevin Magee and John Kocinski. They fly past, taunting you with daredevil deeds that would mean disaster if you were foolish enough to attempt to emulate them.

Sharing the track with these men is indeed like moving through a door into another world where the laws of physics mean more to some people than others. You can no longer smugly announce ‘I could do that’ and walk away from the spectator area, believing that if someone put a million dollars in your hands and sat you on a factory bike you could cut the same lap time as these guys.

I can only watch in wonder through my visor as Mick Doohan slips past me into Suzuka’s first-gear hairpin his Honda RVF750, lays the bike on its side until both tyres must surely exceed their traction limit, cracks open the throttle as he progressively moves his bodyweight to the front of the machine and lays a streak of burning rubber on the tarmac, wisps of rubber smoke and all.

The greasy black arc curves outward towards the kerb and continues unfalteringly through the shift into second gear for another 20 yards until Doohan hits third, then the tyre hooks up and the RVF’s power finds another way of showing itself. The front wheel jumps two feet in the air before slamming back down onto the deck, just in time for Doohan to snatch fourth and lay the bike into the next, fast right-hander.

Since the hairpin Doohan has been climbing a shallow rise, but after the brow, halfway through the fast right, the track drops away. I’m still close enough to see what’s happening as his rear tyre again breaks traction, this time at very high lean, and lays another wild trail of rubber, thicker and darker than the hundreds of others already etched on the tarmac. As the rear tyre gets more and more out of line Doohan turns the handlebars onto opposite lock to control the slide. Then he shifts into fifth – about 140 miles an hour – and lifts the bike momentarily before swooping into the next, even faster right that leads into Suzuka’s famous Spoon Curve left-hander.

I’m given similar exhibitions of what it takes to be a superhero on a million-dollar factory contract by the other stars. I don’t emulate them, I can hardly learn from them. All I do know is that they are going a lot faster, and if I try to go as fast as them I’ll crash. That’s why they’re rich boys and I’m not. 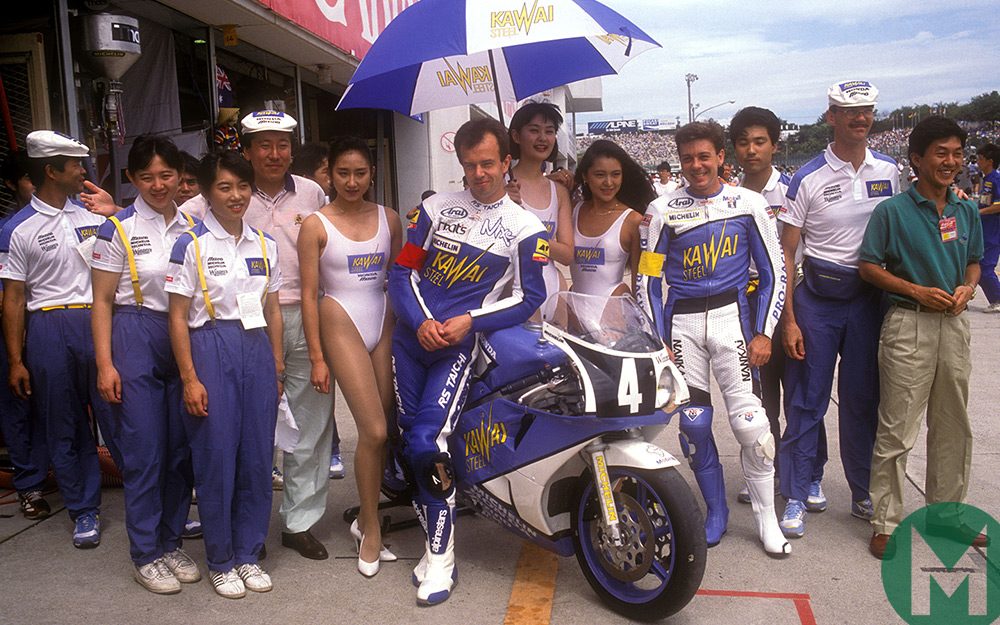 But for one week I am a factory rider – well, almost. I’ve got just about everything I need: a mega-trick RC30 specially prepared by Honda’s Hamamatsu R&D department (including forks machined from solid), flash leathers created specifically for this race and emblazoned with the logo of our sponsors Kawai Steel (who build motorway bridges), a pit bristling with Japanese mechanics, a PR man, a doctor, two assistants and even three bikini-clad girlies who are trained to smile for the cameras, presumably to save me the effort of doing so.

My team-mate in this expensive lark is French bike journalist Gilbert Roy. We are both part-time racers pretending to be pros in what is arguably the world’s most important ‘bike race. I hear that the team’s budget for this one event is £80,000. And I know there’s room for 60 bikes on the grid. Fifteen of those will be full-factory F1 bikes from Honda, Kawasaki, Suzuki and Yamaha. The rest will be semi-factory missiles and massively funded privateer teams piloted by professionals imported from Down Under, Europe and the USA. Names like Graeme Crosby, Carl Fogarty, Rob McElnea, Paul Lewis, Herve Moineau, Malcolm Campbell litter the programme. The pressure is on.

There is already an air of tension when we arrive at Suzuka six days before the race, with five days of practice scheduled. That’s how seriously people take this race – at GPs they get three days. Right away I am anxious to pick up any tips from the stars who fill Suzuka’s in-house hotel and restaurants, so on the first night I dine with Gardner, but all he wants to talk about is his new 1700 horsepower motor yacht. Practice starts next morning, so I’m a little surprised when he orders the biggest beer in the house. If this is how the pros do it, then I better have one too. I discover too late that Gardner is not practising until Wednesday, the day after tomorrow.

Next morning the pits are already swarming with Japanese factory staff, with inscrutable race bosses keeping an inscrutable eye on their teams. By race day there will be 250,000 fans here and that’s why winning the 8 Hours comes a close second to a 500cc world championship in the Big Four’s sales battle. The hype in the Suzuka pitlane comfortably matches the intensity of the racing on the track. Each team has its own Race Queen, and each pit includes its own pre-fabricated rider and hospitality lounge that vary from the simple to the exotic. Ours is very much the latter, with palm trees and a neat little bar, where journalists can relax over a drink while watching Gilbert and me go through hell.

Qualifying begins and we know we’re going to have to cut something like a 2 minute 24 second lap to qualify. Rainey (teamed with Magee on a Yamaha YZF750 Genesis), Gardner (with Doohan on a Honda RVF750) and Schwantz (with Doug Polen on a Yoshimura GSX-R750) are expected to battle for pole at around 2m 16sec on their factory rocket-ships.

In free practice I kick off with 2m 28sec laps, which I whittle down to a 2m 26sec. Over the next two days I have two more 45-minute qualifying sessions in which to slice off at least another two seconds, or suffer never-ending humiliation at the hands of the stars, who I interview at every GP in my capacity as GP reporter for Motor Cycle News. The trouble is that it’s three months since I last sat on a race bike. That’s enough time to lose the confidence you need to flick into turns and slide out of them. Not only that, it’s not easy setting up a race bike when you do it so infrequently. It’s like speaking a foreign language a few times a year: you forget the vocabulary you need to make things work.

In the first timed session I manage a 24.371, which might just get us on the grid. I come across Rob McElnea scrubbing in a new set of tyres on his RC30. I follow him, hoping for a tow. Rob signals me to tuck in behind him but he’s doing 21sec and I can’t hack it. He drags a few hundred yards on me in a lap, snatches a look at me over his shoulder and I can almost see his mocking grin behind the blackout visor. I pit again with 10 minutes remaining and get a fresh soft rear Michelin radial.

This time I have got to do a fast lap. I try to give chase to Dominique Sarron on a factory RVF but halfway through the lap that I feel is going to be THE ONE, the RC30 springs a water leak, forcing me into the pits. Damn and blast. I must wait until my final Saturday session to get us on the grid.

At dinner Rainey asks me how things are going – and he’s managing not to be too patronising. I tell him I’ve gone two seconds faster every time I’ve been out and I feel I can go quicker.

He grins. “You sound like a real racer: ‘Hey, I know I can go faster!’ I’ll have to come over and interview you guys sometime. Anyway, just gets into the low 20s and you’ll be okay.”

Rainey manages to make ‘low 20s’ sound so easy. Lying in bed that night I think my way around Suzuka’s 18 corners and I reckon I can make a 2m 22sec lap in Saturday’s final qualifying session. But I haven’t taken Japan’s freaky climate into account. When I wake up the next morning there’s a typhoon outside. The rain is lashing down. I don’t even bother going out but I give up all thought of slashing my wrists when the final grid sheet arrives.

We are 57th on the grid, five short of disaster.