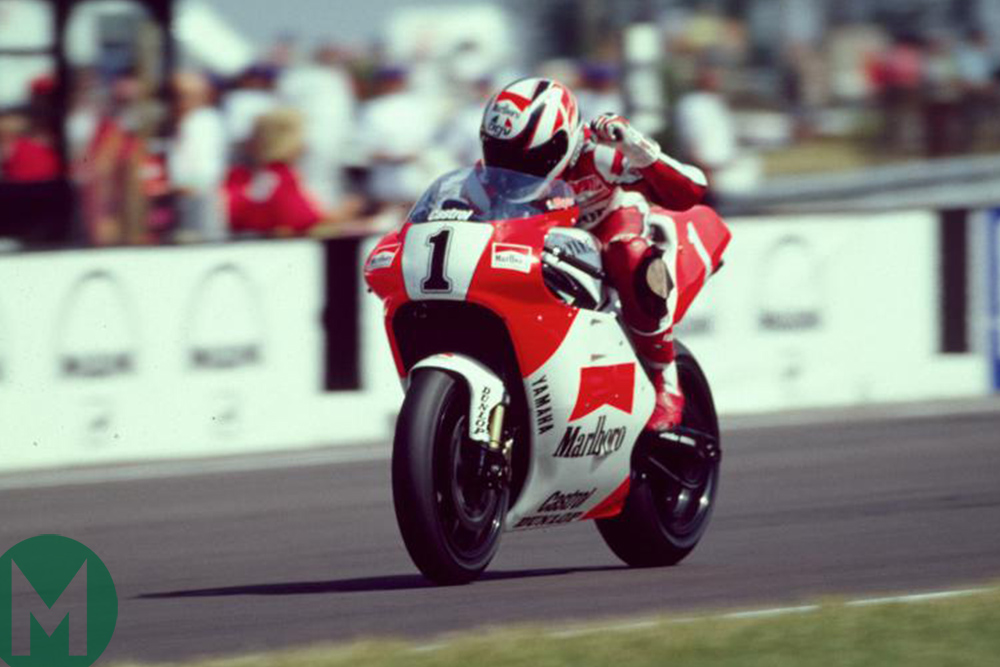 At the time I was writing press releases for Marlboro Team Roberts and Chesterfield Aprilia, so I was sat in the Marlboro media bus behind the Team Roberts pit at Misano, writing a release celebrating Jean-Phillipe Ruggia’s 250cc win on his factory Aprilia, while watching the 500cc race unfold.

The duel for the 500 crown had rarely been hotter – there was a real tension in the air as ancient rivals Rainey and Kevin Schwantz prepared with their teams for the final championship push. Rainey, who was gunning for a fourth straight title, had retaken the points lead from Schwantz with a dominant victory at the previous Grand Prix in the Czech Republic. Schwantz had held a comfortable points lead until the preceding British Grand Prix, where he was skittled by a falling Mick Doohan, and Brno, where he slumped to fifth, due to chassis and grip problems. There were three races left – Misano, Laguna Seca and Jarama – and just 11 points between them.

Both men were riding injured, which was nothing unusual in what was one of the nastiest eras of Grand Prix racing. Rainey had crushed several vertebrae when he crashed at Donington five weeks earlier. His back was so bad that Team Roberts had employed a back specialist to look after him at subsequent races. Schwantz was riding with an injured right hand, also sustained at Donington, which was so bad that he had to rest the hand while racing, using his left hand to open the throttle along Misano’s back straight.

“The bike was chasing me. That’s how it all happened – we think the bike hit me.”

Rainey out-qualified Schwantz at Misano but neither was in great shape. Not only were both struggling with injuries, they also had bike issues, although each tried to convince his rival that he was as strong as he’d ever been and that his motorcycle was better than it had ever been.

Rainey’s Yamaha YZR500 was getting better, thanks to a French-built ROC chassis and improving Dunlop tyres. Schwantz, however, couldn’t find the right Michelin front for Misano, so his crew gambled on fitting a soft compound tyre to his Suzuki RGV500. This would allow him to run a fast pace in the early stages and perhaps push Rainey into making a mistake. But the trick didn’t work, because the Texan ran out of front grip before the race was a third done, by which time Rainey was leading, just ahead of team-mate Luca Cadalora, with Schwantz 1.9 seconds down.

The Californian was pushing hard, his thrilling technique speaking volumes about someone who seemed totally at home at the limit, the bike twitching this way and that, his brain and body apparently comfortably in charge. He could almost taste that fourth world title.

On lap 10 of 29 Rainey flicked his YZR into the first turn, a medium-speed right-hander, which is now the circuit’s final corner, a medium-speed left-hander. According to Cadalora, who was right behind, Rainey was slightly wide at the apex, where there was a tricky dip in the asphalt. He was hard on the gas at around 100mph when the rear tyre smeared sideways, then gripped. He landed horribly and the bike hit him. The accident smashed his sixth thoracic vertebra, severing his spinal cord and paralysing him from the middle of the chest down.

“I remember after about 10 laps I felt like I’d already raced a whole GP, I was kinda tired,” Rainey recalls. “In hindsight I should’ve let the thing play out some more but I needed to beat Kevin. That danger point, where you brake, flick and get on the throttle, that’s where I had my problem right there. The bike didn’t highside me, it stepped out and flicked me off the inside, so I got in front of it, so the bike was chasing me. That’s how it all happened – we think the bike hit me.”

Cadalora assumed the lead, chased by Schwantz. Neither had a clue just how badly Rainey was hurt. Marshals went to the reigning champion’s aid. He wasn’t moving, but that wasn’t anything unusual. I was watching the race on a small TV and assumed he had been knocked out. But then I then noticed him move his head and arms, while his legs stayed motionless. I’ve never forgotten that moment. Ever since then, whenever I see a rider have a bad crash, that’s the first thing I look for: can he move his legs?

Grand Prix racing was never the same for quite some years after that. The sport is more accustomed to saying a final goodbye to riders than saying hello to them in a wheelchair.

A quarter of a century later, Rainey remains one of motorcycle racing’s all-time greats. Watching videos of him ride still takes your breath away. He was a slow-burner, controlling his aggression and emotion with intelligence and a real understanding of how to get the best out of a motorcycle, even when it wasn’t working right, which was quite often in those days of fiery two-strokes.

Following Rainey’s exit, some said that Grand Prix racing should never return to Misano, but that all changed in 2007, via the simple deceit of changing the circuit’s direction of travel, so it’s no longer the track where Rainey ended his career.

Ironically, Rainey adored Misano, partly because it ran anti-clockwise, which is heaven for a dirt-tracker, but mostly because of the three left-handers that led onto the back straight, taken at ever-increasing velocity. These were his favourite corners in the entire championship, a sequence to which he looked forward during each and every lap around the otherwise featureless seaside venue. The first of the three sweepers was taken in third gear, the last in fifth or sixth, at a goodly 150mph; with the rear tyre spinning and creeping sideways all the way through.

Every time I go to Misano I think about that, and I remember the sense of dread I felt while watching Rainey’s immobile legs in that gravel trap.

‘Anthony Gobert wanted a dancing girl in the pit!’

In 1984 Stuart Shenton had been with Honda for 18 months when HRC engineer (and later HRC president) Satoru Horiike wandered up and asked a question. “He said, if Honda…

MotoGP faces its toughest season ever in 2020

Last year’s MotoGP season counted 19 races over 37 weekends – the new 2020 calendar starts with 13 races over 18 weekends. How will riders and teams cope? 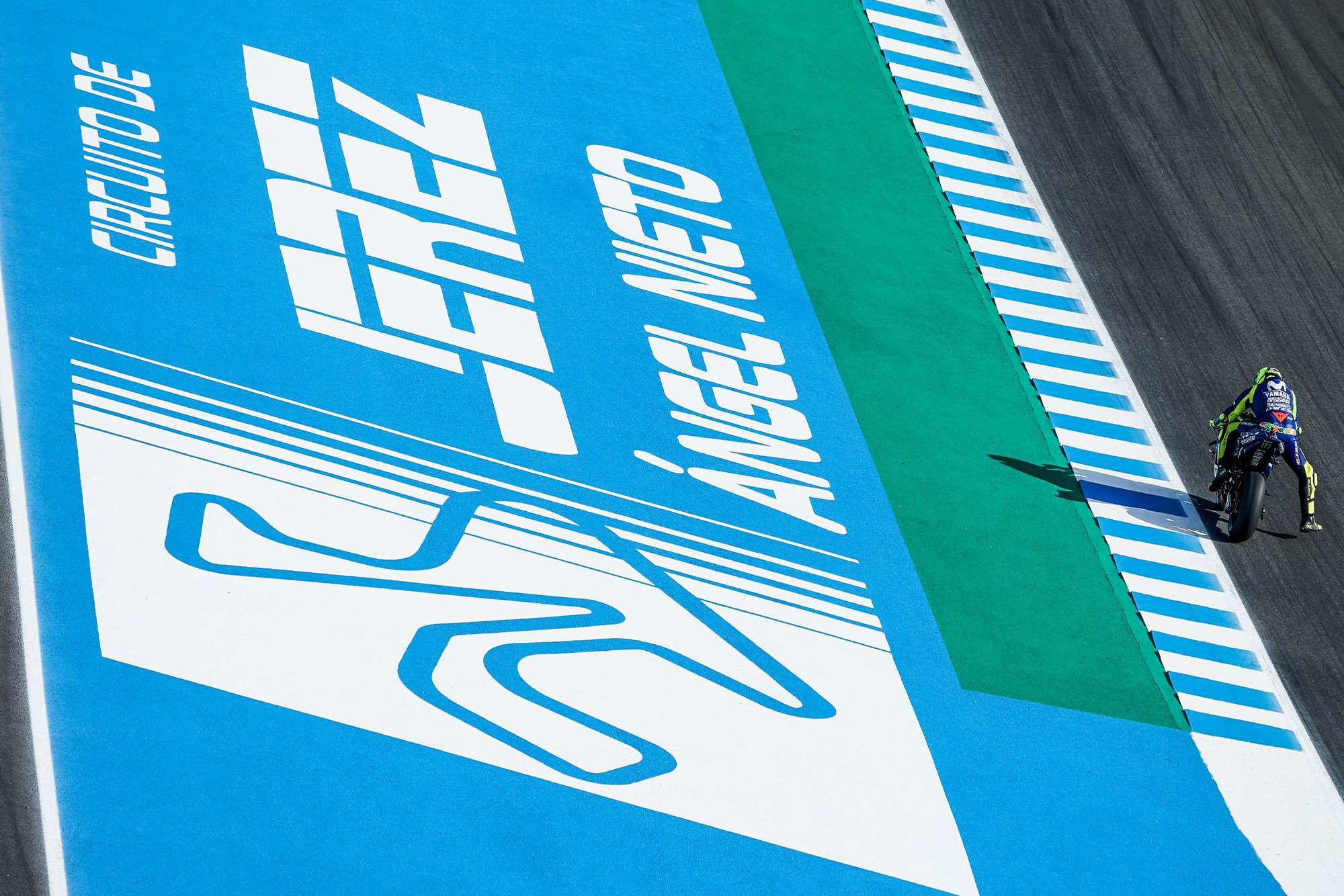 The revised 2020 MotoGP calendar features 13 European races - mostly in Spain, with the possibility of an extra four flyaway grands prix