Saturday marks the start of the 100th Isle of Man TT, so this is a good time to ride with Peter Hickman on his mind-boggling 135.452mph record lap 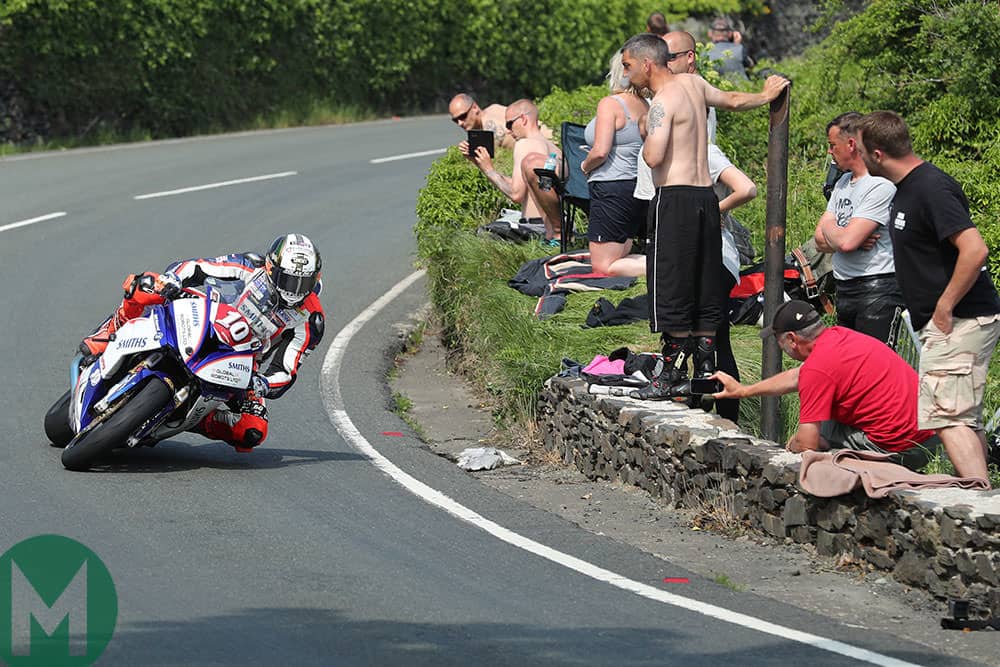 It’s time to take a ride with Peter Hickman, his Smiths Racing BMW1000RR and the world’s most famous dead bug in last year’s Senior TT. We are starting the last of six laps, the final 37 ¾ miles of a 226.5-mile race that’s been run every year since 1911, apart from during the two World Wars and the 2001 foot and mouth outbreak.

At the end of the fifth lap Hickman crosses the start/finish trailing rival Dean Harrison’s Kawasaki ZX-10R by almost two seconds. He has a mountain to climb, literally and metaphorically.

Hickman admits he’s never at his best in the first few miles of a TT, so by the end of lap one he’s 1.4 seconds behind Harrison. After three laps the gap has grown to 5.817sec. The race is slipping away from Hickman, but by lap four he’s in the groove, breaking Michael Dunlop’s lap record. to cut Harrison’s advantage to 1.402sec. By the start of lap six the gap is down to 1.063sec. This is where we join Hickman for the last lap, which is a bit like taking a ride in the Millennium Falcon, after Han Solo has hit the hyperdrive button.

We are using the lap timer at the top right of the screen. Speeds given are from GPS data, because wheel speeds and engine rpm vary too much due to bumps and lean angle. The video has been split into short sections to explain Hickman’s lap in detail.

In the June 2019 issue of Motor Sport, Mat Oxley interviews Peter Hickman. Subscribe to make sure you never miss an issue.

The bike is airborne at 184mph (0min7sec) over St Ninian’s crossroads and the plunge down Bray Hill begins. It feels like dropping off the edge of the earth, but it’s much worse at the start of the first, third and fifth laps, with a full tank of gas and new tyres. Bray Hill is flat-out all the way – 180mph at the dip.

Through the sixth-gear left towards Union Mills (1min 1sec) the bike is getting very lively. It’s the same exiting Union Mills, because next is the one-mile uphill run to Ballagarey, nicknamed Balla-scary, with good reason. At the TT the old in-slow-out-fast racing maxim applies more than ever, because entering corners too fast is likely to have you in a wall, while exiting fast gives you extra speed for the next mile or more.

It takes Hickman the two weeks of practice and racing to build up to taking the left-hander through Crosby village flat-out in sixth (1min 51sec), 190mph. Most riders now call the corner DJ’s, because the nine-time TT winner David Jefferies lost his life here in 2003.

Hickman hurtles through the right-hander (2min 21sec) at the end of the Greeba Castle section where the negative camber drags you into the foam barriers against the roadside wall.

The BMW has a nasty wobble (2min 50sec) on the approach to the 117mph Gorse Lea right-hander on the run to Ballacraine. From Ballacraine the circuit is more twisty, because it runs alongside the River Neb. As Hickman crests the rise after Ballacraine and descends towards Ballig Bridge the S1000RR once again breaks traction and angrily spins the rear tyre.

He loses time as he gingerly passes a backmarker (3min 25sec) – they’re that slow they’re liable to change line at any moment – into Laurel Bank. Then it’s more wheelspin on the exit.

The Black Dub left-hander (3m 53sec) is tricky because the camber disappears like someone pulling a rug from under your feet. More wheelspin out of here. Hickman doesn’t only spin the tyre because he’s got around 220 horsepower, he uses spin to help turn the bike, especially at high speeds, because the faster he goes the less the bike wants to turn. This is quite a skill at 170, 180 and 190mph.

Another backmarker appears as he ascends Creg Willies hill (4min 22sec), where more than a century ago riders used pedal power to help their engines make the climb. Hickman has it all worked out – he rolls off for a moment, so he will catch the backmarker further up the hill, so he can use full throttle for the final part of the climb, which takes him onto the Cronk y Voddy straight.

He is pinned in top gear (4min 46sec) through the Cronk y Voddy crossroads, where the road drops down to the 11th Milestone, sending the S1000RR into a huge 180mph tank-slapper. Next is Drinkwaters, one of many TT corners named after riders who died at that particular spot. Ben Drinkwater lost his life here during the 1949 Junior TT.

After Barregarrow top and bottom (5min 55sec), Hickman heads into the 13th Milestone, where the road drops, turns left and climbs. There are more slow riders ahead and he wants to get them before entering Kirk Michael. He grabs a big of handful of throttle and his rear Dunlop breaks traction again. That loses time, so he has to thread his way through the backmarkers as he enters the village. Speed through this 30mph-zone is 165mph.

After the 145mph Rhencullen jump Hickman is into top gear at 190mph through Bishopscourt, rear tyre still spinning like crazy.

Exiting Quarry Bends (7min 50sec) as fast as possible is vital for the one-and-a-bit-mile run down Sulby straight. Hickman gets greedy with the throttle, so the rear spins up, but once again he doesn’t back off. Sulby is the fastest part of the course – Hickman reaches 197mph through the right kink before braking for Sulby Bridge.

More wheelspin (8min 35sec) as he exits the Ginger Hall left-hander and heads up the short hill to Kerromoar where the course changes once again. The three miles from here to Ramsey are bumpy as hell, so riders stand on the footpegs, like motocrossers, as the tyre spins and grips, spins and grips over the bumps.

Past Milntown cottage (9min 40sec) and Hickman is spinning the back tyre again as he jumps Milntown bridge and chases Conor Cummins into Ramsey. He’s so late on the brakes passing Cummins that he nearly loses the front into Ramsey’s Parliament Square.

The May Hill right is horribly bumpy, so Hickman pulls deliberately a wheelie so the front wheel can’t kick left and right over the bumps. This is standard practice around much of the course.

Accelerating hard up the hill (10min 43sec) from Ramsey hairpin to Waterworks the rear breaks traction in a big way. And again climbing the hill towards the Gooseneck, the start of the mountain section, where the road opens out across bleak moorland.

Guthrie’s (11min 53sec) follows the mega-fast Joey’s right-hander Hickman is a bit too aggressive with the throttle leaving Guthrie’s and he has another big moment.

Hickman races with zero traction control at the TT. Exiting the 27th milestone right-hander he pretty much brushes the foam bales, because he wants the fastest entry onto the all-important Mountain mile, which peaks at 193mph.

Exiting the 150mph Verandah right-hander (13min 5sec), where Cummins had his huge shunt some years ago, the bike gets very squirrely, in fifth gear.

Through Hailwood’s Height and Brandywell – the highest point of the course (13min 50sec) – and from here it’s downhill all the way, with engines picking up revs faster than ever.

Hickman exits Windy Corner (14min 15sec) on the very edge of the road, the rear spinning up again as he touches the white line on his way to the 170mph 33rd left.

Hickman gets the roadside signal he’s been waiting for – he’s finally ahead of Harrison – and he gets another load of wheelspin (15min 29sec) exiting Brandish on the run down to Hillberry.

Governor’s Bridge is a real shock to the system (16min 25sec). Hickman has been doing over 100mph for most of the last five minutes, then suddenly he’s down to 10mph. That’s why it’s so easy to crash. To make matters worse he’s got another backmarker in the way and he knows he can’t afford to lose a millisecond.

Hickman crosses the line (16min 42sec) and turns into the collecting area. He still doesn’t know if he’s won – so he has to ask the crowd!