The last time grand prix racing was properly interrupted was in September 1939, when Nazi Germany invaded Poland, triggering the Second World War. Those circumstances and the circumstances of the coronavirus crisis may be very different, but the effect on racers is the same: young men in the prime of their lives having their careers stalled through no fault of their own.

Who knows when Marc Márquez, Maverick Viñales and the rest of the MotoGP grid (and every other grid, for that matter) will go racing again, and who knows what racing will look like? Teams and manufacturers are facing an unprecedented crisis, which mirrors the larger crisis that’s unfolding all around us. Even if race teams survive the pandemic, what about airlines and all the other industries that racing relies upon?

During the months leading up to the outbreak of war in the summer of 1939, German Georg Meier and Italian Dorino Serafini fought an epic battle for that year’s 500cc championship, at that time a European title rather than a world title. Both rode supercharged multi-cylinder machines, which finally defeated Norton’s venerable single (difficult to supercharge) that had ruled most of the 1930s.

Meier’s back injury turned out to be the luckiest break of his life. He was declared unfit for military service.

Meier was a Wehrmacht soldier and a factory BMW rider, famed for brave rides that won him an audience with Adolf Hitler and the nickname Der Gusseiserne Schorsch (Ironman Georg). He scored numerous victories aboard BMW’s fearsome Type 255 Kompressor boxer twin, including the 1938 European championship, celebrating each success with a Nazi salute.

Serafini was the son of a carriage maker in Pesaro, the birthplace of Graziano Rossi, Valentino’s father, and a centre of Italian motorcycling history. He joined Gilera in 1938, riding the factory’s blown inline-four, the great-granddaddy of today’s Suzuki and Yamaha MotoGP machines. Like Germany, Italy had a fascist leader, so Serafini also marked his victories with a fascist salute in honour of dictator Benito Mussolini.

Mussolini was a keen motorcyclist – the Italian Moto Club proclaimed him the First Rider of Italy. He was good friends with fellow black-shirt Count Giovanni Bonmartini, who developed Italy’s seminal inline-four before Guiseppe Gilera, who sometimes decorated his machines with Mussolini’s preferred symbol, the Fascio Littorio.

Meier won the first three rounds of the 1939 500cc season, at the Isle of Man TT, Assen and Spa-Francorchamps. But he made a big mistake in July, when he skipped the French motorcycle GP to drive an Auto Union in the French car GP. Next time out at Saxtorp in Sweden Meier and Serafini once again disputed the lead, until Meier crashed heavily, sustaining a serious back injury.

Serafini won the next race at the Nürburgring and the one after that at Clady, Northern Ireland, where the grid was half empty, because most people knew what was coming. Just days later war broke out, cancelling 1939’s final two GPs at Berne, Switzerland, and Monza, Italy.

And that was that, the racing careers of Meier, Serafini and all their fellow racers were stalled, through no fault of their own.

Meier’s back injury turned out to be the luckiest break of his life. He was declared unfit for military service and spent the war as a motorcycle instructor and chauffeur to Admiral Wilhelm Canaris, chief of German military intelligence. Canaris was executed in 1944 for plotting against Hitler. After the war Meier returned to racing, but only in the German championship, because Germany was excluded from international events until 1951. 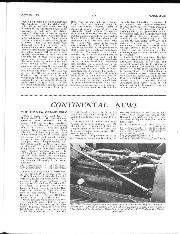 Meier’s countryman Ewald Kluge, who won the 1939 250cc champion aboard a pump-supercharged DKW two-stroke, had a more complicated time after the war. He was captured by the Russians, denounced as a Nazi and interred in the NKVD’s Special Camp No 1, where 7000 prisoners died between 1945 and 1948. He returned to racing in 1950.

Serafini also continued racing following hostilities, but decided he was too old for bikes, so he moved into cars. He drove for Maserati and Ferrari, entering only one Formula 1 world championship GP, at Monza in 1950, where he finished second. He is the only F1 driver with a 100 percent podium record!

Grand prix racing was certainly very different after the war.

In 1945 most of Europe was ruins, but the desire to forget the horrors and get back to racing was huge. Europe’s first post-war race meeting took place on August 4 at Tortoreto, on Italy’s Adriatic coast, less than three months after the end of the war in Europe. However, the country’s number one circuit, Monza, remained out of use for some while, because its asphalt had been torn up by Allied tanks during a parade following VE (Victory in Europe) day.

GP racing restarted in 1946, but without the races counting towards a championship, and the first post-war TT took place in 1947. That year’s 500cc Senior TT was won by bespectacled Norton rider Harold Daniell, who had been spared war service due to poor eyesight!

The first post-war GP championships took place in 1949, following a decision to upgrade the series to world-championship status taken at London’s Royal Automobile Club in November 1948.

But first the technical rules had to be rewritten because, like most European industry, the various motorcycle manufacturers were battered and broke. The 1949 rules outlawed superchargers, banned refuelling and limited fuel to the standard post-war 72-octane ‘pool’ petrol. This fuel – little better than paraffin – required Norton (for example) to reduce compression ratio from 11:1 to 7:1, losing at least 20 per cent of the engine’s horsepower.

Even so, some manufacturers struggled to compete. Gilera didn’t even contest the opening round of the 1949 world championship because it couldn’t afford to transport its team and motorcycles from Milan to the Isle of Man.

The inaugural 500cc world title was won – fittingly – by someone who had played a part in the war. Briton Les Graham was a brave and talented pilot who flew Lancaster bombers with the RAF.

Graham was decorated for his bravery, most importantly for his efforts during a raid on the vast U-boat pens in Bordeaux, France. Amid the chaos a Luftwaffe fighter hit and blew up a Lancaster immediately below Graham’s plane. The force of the blast flipped his Lancaster onto its back and flung him out of the pilot’s seat, because after four uncomfortable hours of flying he had undone his seatbelt. Graham’s right leg caught on the throttles – two now fully open, the other two fully closed – as the plane hurtled earthward. Somehow he managed to regain control with yards to spare. 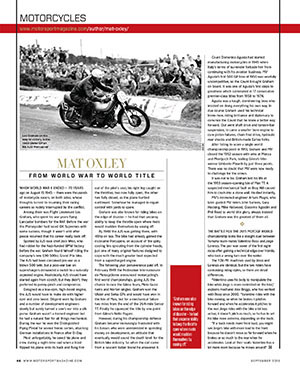 From world war to world title

When World War II ended – 70 years ago on August 15 1945 – there were thousands of motorcycle racers, on both sides, whose thoughts turned to resuming their racing…

You can imagine that riders who had spent the war in combat applied themselves to peacetime sport with a special attitude to danger and personal safety.

Graham was another one whose career had been stalled by the war. His career was just taking off – the 27-year-old was a factory rider for Birmingham marque OK Supreme during the 1930s – when Hitler messed everything up.

Hopefully Márquez, Viñales and other bike racers won’t have to wait as long as their 1940s counterparts to recommence their racing careers. And when the racing does start again will the old ages of Graham, Meier, Daniell and the rest be a good omen for Rossi?