For the third lap in a row, Alain Prost gestured from his McLaren as he raced past the pitlane. The Frenchman believed the race he was leading was too dangerous to continue.

Finally, the course clerk acquiesced and the red flag was put out.

The 1984 Monaco Grand Prix over, denying spectators a thrilling climax to the race.

Ayrton Senna may not have won that day but his thrilling charge to second, getting tantalisingly close to winner Alain Prost in the process, had alerted F1 to perhaps the most profound talent it would ever see.

The newcomer was putting in a drive way beyond his years, as if this was his 10th time at Monaco, not his first.

The race had been set to be a challenging one from the word go. A light drizzle on Sunday morning had increased to a deluge by the afternoon.

As the start lights went out, carnage ensued immediately. The two Renaults of Derek Warwick and Patrick Tambay got tangled up with René Arnoux’s Ferrari, causing a traffic jam at the first corner.

Arnoux soldiered on but the French cars were out.

At first Prost led through the spray, but he was caught and passed on lap 9 by a hard-charging Nigel Mansell. The Lotus driver had been on form all weekend and as Prost was held up by a backmarker, Mansell seized the initiative and with it the race lead.

While this was going on, Toleman driver Senna had been making serious inroads through the pack. Starting 13th on the grid, by lap 15 he was in 4th position. On the way he had disposed of established stars Keke Rosberg and the aforementioned Arnoux; before long he would overtake Niki Lauda also.

Whilst others floundered, desperately looking for grip that wasn’t there, the newcomer was putting in a drive way beyond his years. It was as if this was his 10th time at Monaco, not his first. 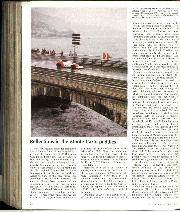 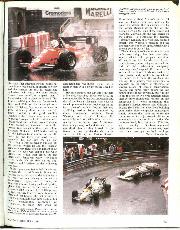 It was a few seconds before ten minutes to five on Sunday June 3rd that Jacky Ickx, as Clerk of the Course for the 1984 Monaco Grand Prix, finally gave…

It was already becoming the kind of performance we would soon get used to from Senna, the Brazilian peerless in the rain. Being so early in his F1 career however, it was a new experience for the watching F1 world.

With the rain coming down harder than ever, the track surface was not looking too dissimilar from that of the harbour just a few metres away. Front wings resembled ships’ bows as the cars ploughed through standing water.

So bad were the conditions that BBC commentators Murray Walker and James Hunt repeatedly lost their television feed, resorting to calling cars’ positions as they passed the press box.

As well as the waves that Senna was making, fellow newcomer Stefan Bellof was impressing too. Driving an underpowered Tyrrell, he had risen from last at the start to 10th in just three laps.

What could stop the supposedly best driver in the best car? A young Brazilian in a Toleman, apparently

Whilst the young guns showed the way, more experienced heads lost their cool. Both Riccardo Patrese and Michele Alboreto spun off whilst Brabham stand-in Corrado Fabi also lost it just before the tunnel, stalling his car.

As Mansell was to prove so often in his career, his driving style only had one setting: flat out. Four laps after passing Prost, he was already over 7 seconds ahead.

However, his unrelenting style eventually proved to be his undoing – on lap 16, one of his rear tyres lost traction as it touched a painted road marking, sending his Lotus spinning into the barriers and out of the race.

After Mansell’s exit, it seemed it would be plain-sailing for Prost in his McLaren. Now back in the lead, the Frenchman had a 32.6sec lead over Niki Lauda.

With the supposedly best driver in the best car, what could stop him? A young Brazilian in a previously unfancied Toleman, apparently.

Both McLarens were in fact now struggling with their brakes. Lauda was to spin off on lap 23 after locking a wheel Casino Square.

Prost was driving cautiously to prevent a similar fate, but had Senna remorselessly closing in.

As the laps passed by, the 30sec+ margin which Prost had began to reduce rapidly. He was losing 2-3sec a lap to the Brazilian. Senna would be appearing in Prost’s mirrors before too long.

The winner of eleven grands prix was being reeled in by a rookie with only five F1 race entries (and two finishes) under his belt.

The intensity increased as Senna continued to crank up the pressure, setting the fastest lap on the 24th circuit.

As he reeled off the quick laps, the Brazilian appeared a picture of serenity in difficult conditions. Toleman designer Pat Symonds said as much to Motor Sport in a 2017 interview:

“With Ayrton, it was the first time I saw that there was something different in a real elite sportsman. Obviously he had ability by the bucketful but it was more than that. It was the first time I’d met a driver that didn’t need to use his entire brain to drive the car and had plenty of capacity left to think about what was going on.”

It became obvious that the Toleman driver would soon take the lead. Cautious though most of the remaining drivers now were, the rain was actually easing off.

Prost had had enough though. From lap 29 onwards he began waving his arm as he passed the pits, signalling that it was too dangerous to carry on.

The course clerk that day was grand prix winner Jacky Ickx. He concurred with Prost and on lap 32 put out both the red flag and the chequered flag simultaneously.

In a dramatic finish, Prost stopped his McLaren right on the finishing line, just as Senna roared past.

The Frenchman stepped out, confident he had secured victory, whilst the Toleman driver did one more tour of the track, wildly waving his arms in the air in the belief that he had in fact won.

The result was taken from the last lap that all remaining runners had completed, which Prost had led, thus making him the winner.

The result was not without controversy. Ickx drove for Porsche in the World Endurance Championship and Prost had a turbo engineered by the Stuttgart firm in the back of his McLaren.

Some have alleged that the Porsche connection prompted the Ickx to wave the red flag early, thus securing his employer victory.

Whether this was true or not, it emerged it wouldn’t have mattered anyway.

Senna had damaged his Toleman’s suspension a few laps previously after clouting the apex at the Nouvelle Chicance. If the race had been run the full distance, he probably wouldn’t have made it to the finish.

Motor Sport’s Alan Henry observed of the rookie at the time “Whilst he and the Toleman team had every right to feel indignant about the fact the race was stopped just when victory was within their grasp, the fact remains that Senna was lucky — or skilled — to finish.”

Even at this early stage in his career, Senna had already made in impression on Henry: “He has time on his side, however, and I believe his day will come very soon.”

How prescient those words would prove. The young upstart may not have emerged victorious at Monaco ’84, but he would make up for it with six principality victories in the coming years, in addition to another 35 grand prix wins.