Sebastian Vettel (1st)
It’s hard to say whether he would have been so dominant if Hamilton’s brakes weren’t such an issue, but the German drove a superb race regardless. Even though he didn’t have much to do in the way of overtaking, having passed the McLaren driver during the first stops, he proved how much he is maturing with a dominant win. To be over 15 seconds ahead of his team-mate at the end of the race goes some way to explaining how quick he was. 10/10 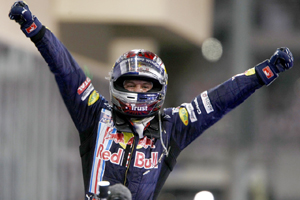 Mark Webber (2nd)
Webber completed a superb one-two for Red Bull and finished a strong season well. He’ll be annoyed to have finished so far behind his team-mate, but no doubt ecstatic that he kept Button behind him in the closing laps. 9/10

Jenson Button (3rd)
A fitting finish for the 2009 Formula One World Champion. He was close to taking second in the closing laps and showed us all, once again, why he deserves to top the table this year. Even if he may have had an advantage at the beginning of the season when the Brawn GP car was untouchable, he was still on the podium at the last race when the Red Bull and McLaren were the machines to have. 9/10 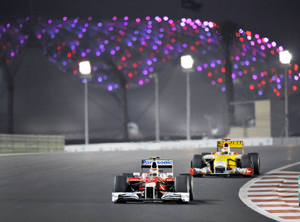 Rubens Barrichello (4th)
Early contact with Webber meant that the Brazilian lost some downforce and lost a place to Button. However, he was never far behind, despite the damage, and finished his season with another strong performance. It’s sad that he has missed possibly his best chance at a Formula One World Championship, but he’s dispelled the ‘number 2’ tag somewhat with some stunning performances throughout the season. 8/10

Nick Heidfeld (5th)
Heidfeld drove a good race from eighth on the grid and was convincingly quicker than his team-mate Kubica. A solid points haul for BMW Sauber and enough to overtake Williams in the Constructors’ Championship. 8.5/10

Kamui Kobayashi (6th)
The first of the one-stoppers, he beat Trulli and once again proved he’s not intimidated by other more experienced drivers. I am fast becoming a signed-up member of the Kobayashi fan club. His first points will hopefully be enough to earn him a place in the team next year. 9.5/10 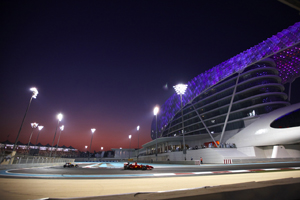 Jarno Trulli (7th)
The Trulli train was avoided and the Italian drove a good race. He had a decent start, but later he complained of rear tyre degradation and braking consistency, which made him have to settle for second best to his rookie team-mate. 7.5/10

Sebastien Buemi (8th)
Buemi had a great weekend, which was made to look even better courtesy of his team-mate’s exploits (see below). The Toro Rosso was obviously quick around Yas Marina, but he didn’t make any mistakes apart from some close dicing with Kubica which sent the Pole into a spin. Not really Buemi’s fault though. 8/10

Nico Rosberg (9th)
With an apparent lack of speed throughout the race and consequently finishing outside the points, Rosberg didn’t manage to help Williams hold on to sixth in the Constructors’ Championship. He can hardly be blamed for that though considering the team finished with 34.5 points, of which his team-mate scored… nil. 6.5/10

Robert Kubica (10th)
Of course after Buemi said that he left enough room for Kubica when they were fighting for position, the Pole then complained that he hadn’t; no surprises there. Kubica drove a good race, apart from a slow second stint where any dreams of a points finish were snuffed out, but crucially he was outpaced by his team-mate all weekend bar qualifying. 6/10 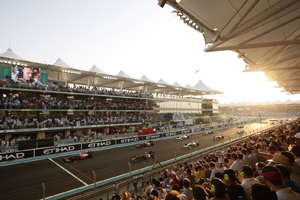 Heikki Kovalainen (11th)
He matched Hamilton all weekend until he had gearbox issues in qualifying leaving him 13th on the grid. A gearbox change later and he was demoted to 18th effectively ending his chances of points. Not a great weekend for Kovalainen, but he certainly wasn’t embarrassed. He deserves to be on the grid next year, just not in a winning car. 7/10

Kimi Räikkönen (12th)
The Ferrari was woefully off the pace this weekend, which isn’t that surprising when you consider how little time was spent on developing the ’09 car. Even though he’ll probably stay in Formula 1 it’s sad that the Finn had to end his time at Ferrari with a 12th place finish. 7/10

Kazuki Nakajima (13th)
When a driver admits after the race that “there was nothing to do but keep plugging away for 55 laps”, you’d have to ask yourself as a team whether this is the type of attitude you want in one of your drivers. Fine if he scores points when he doesn’t have to just “plug away”, but Nakajima doesn’t. Another pretty anonymous race, although at least it was that rather than another spectacular crash. 5/10 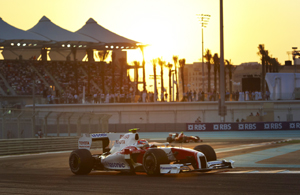 Fernando Alonso (14th)
If the Ferrari was off the pace, the Renault was virtually standing still this weekend. Although he didn’t end the season on a high, Alonso showed us all why he’s such a highly rated driver when he passed Kobayashi with a huge lunge down the inside. Nothing massively surprising there, but he was fighting for 15th and pitted at the end of the lap. 7/10

Vitantonio Liuzzi (15th)
The Force India had brake problems and struggled for pace all weekend looking average throughout the practice sessions and then being knocked out on Q1. Still, it’s been a good few races for Liuzzi and he won’t have harmed his career prospects with this result. The car was just simply not quick enough. 6/10

Giancarlo Fisichella (16th)
We all jumped on Badoer’s back when he was so woefully slow earlier in the season, but then Fisi came along and seemingly couldn’t do a huge amount better; “it’s a hard car to drive,” we all said. The ex-Force India driver should be closer to Räikkönen by now though. Qualifying dead last and then pottering about at the back, however bad the car is, simply isn’t good enough. 4/10

Adrian Sutil (17th)
A weekend to forget for Sutil and one which has put a slight dampener on how far Force India has come this season. The burning question is whether Sutil deserves a seat for next year? He’s certainly quick enough, but he does seem to be involved in plenty of ‘incidents’. 5/10 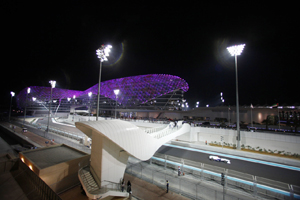 Romain Grosjean (18th)
A few brake problems during the race meant that Grosjean was never going to feature that highly. He manages to spend quite a lot of time off the Tarmac during a race weekend, but hasn’t been embarrassed by Alonso. Whether he’s kept at Renault for next year alongside Kubica is doubtful though. 5/10

Lewis Hamilton (19th – RET)
He set the pace all weekend, produced one of the best qualifying laps of the season and then had brake issues forcing him to retire after 19 laps. We all expected him to disappear after the start, but his brakes meant that he lacked the blistering pace he had previously, losing him a place to Vettel during the first stops. 9/10

Jaime Alguersuari (20th – RET)
He didn’t qualify too badly, however, a gearbox problem early on in the race meant that he came crawling into the pits, only to draw up at next door’s Red Bull crew who were eagerly awaiting race leader Vettel. He was unsurprising ushered through fairly quickly. An easy mistake to make when your team isn’t out in the pitlane, but it didn’t look great though did it? 3/10