The big question as we approach the German Grand Prix is this: can Ferrari win another one? Has Fernando Alonso finally got his hands on a winning car to go with his five-year contract?

Before the Spaniard won at Silverstone he had his well insured fingers on another Ferrari steering wheel – a much bigger and simpler one than that to which he is accustomed. Before going out to race he climbed aboard the car which took José Froilán González to victory at Silverstone in 1951 – the Scuderia’s first World Championship win. 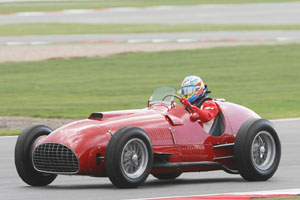 The Ferrari 375, also used by Alberto Ascari, has a V12 engine, four-speed gearbox, drum brakes, narrow tyres and lots of power. And no seat belts. More significantly, the throttle pedal is in the middle, the brake on the right… Not something you’d wish to forget at the end of the Hangar Straight.

Another planet, then, for the double World Champion from Oviedo in the Asturias region of northern Spain. But the Asturians are made of stern stuff; they are fighters, having had to defend their mountainous homeland from a series of invaders. Alonso therefore relished the challenge of learning to double de-clutch Bernie Ecclestone’s priceless old racer. 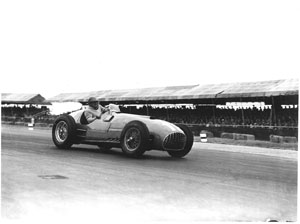 “He had to learn to bump-start it first,” laughed Robert Dean, who cares for Ecclestone’s car collection. “As we pushed-started him on the grid he casually looked over his shoulder and said ‘tell me what to do’. We were shouting ‘clutch! drop the clutch!’ but he got away beautifully. He was great, he followed instructions to the letter, and I don’t think he missed a single gear during his laps. I was very impressed at how easily he got to know the 375, but I did warn him about the brakes and double de-clutching when changing down. I’m not sure he really used the brakes – except once when he was so busy waving to the crowd he ran a bit wide.” 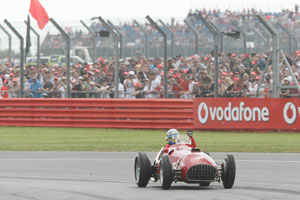 Most modern-day Grand Prix drivers have little or no interest in the history of the sport, or the cars that went before them. But Alonso was keen to know about the Ferrari’s performance – and its limitations – before venturing on track 60 years after the 375 finally beat the all-conquering Alfa Romeos.

“When Felipe Massa drove it at Fiorano he didn’t seem interested in the history,” Dean told me, “whereas Luca Badoer loved it, wanted to do more and more laps. Today’s drivers can learn something from the history of the sport.” 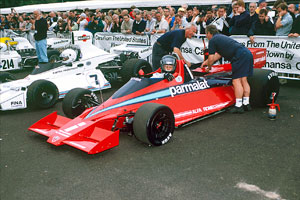 Alonso, as you would expect, was ready for some fun. “Oh yes, he was all smiles, very friendly, not at all the rather glum chap you sometimes see on TV,” said Dean (above in the Brabham BT46B at the Goodwood Festival of Speed in 2001). “He was most interested in getting out there, driving it, and he certainly knows the history. It’s a bizarre thing, but I’ve now shown both Michael Schumacher and Alonso how to drive a Grand Prix Ferrari – and not many people can say that. They don’t know what magnetos are, of course, but when you say ignition they understand. I’m not sure Fernando had ever done much double de-clutching or bump-starting, not since he was a student anyway. But I gave him a 6000rpm rev limit which is nice and safe for that engine.” 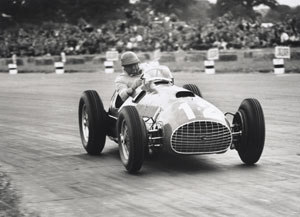 So what did Signor Alonso think of this experience? “Afterwards, he said he couldn’t believe how powerful the car was, he was smiling like mad, telling Bernie how fantastic the car felt, assessing it like great drivers do,” said Robert. “Mr E loved it too, and said he was trying to persuade Vettel to drive what he calls a ‘proper car’.” Clearly it set Alonso up well for the Grand Prix in the afternoon.

Unfathomably BBC TV did not show any of Alonso’s laps in the Ferrari, but you can see the British Grand Prix winner at work in the 375 on YouTube. Fast-forward to 4mins and you’ll see him pressing on…