Karun Chandhok reports after a scorching Hungarian Grand Prix, could intra-team battles have repercussions​ down the line?

The Hungarian Grand Prix was boiling, boiling hot. The weekend started off with thunderstorms on Wednesday and Thursday, but as the weekend went along it got hotter and hotter. Track temperatures were into the low 50s at one point, so it was an absolutely scorching weekend.

There’s plenty to talk about, despite the fact that the race wasn’t particularly interesting. There were lots of stories all the way up and down the pitlane. Once again, on a track where dirty downforce is important, Ferrari came to the fore. What I mean by that is when a team aims for a high amount of downforce without considering a penalty for drag, because there aren’t really any long straights. They really managed to suss that out; the car is producing a really good amount of downforce and now it’s the straightline speed that they need to address.

If we look at the trend, in Monaco they were particularly strong, here they were very strong; when you look at tracks like Silverstone, Baku and even Montreal, the Ferraris couldn’t really challenge the Mercedes cars. I’ll be interested to see during this summer break whether they work on efficiency of the chassis or just outright power from the power unit, in terms of the IC and the ERS side as well. I think there’s a lot of interesting stuff for Ferrari to analyse because there’s a clear trend here: when there’s a circuit that requires a high amount of downforce and a lot of corners where one leads into the other, the Ferrari is right there and if anything is quicker than the Mercedes.

Vettel’s lap in qualifying was really pretty special and, actually, in the end Kimi’s final run was very good as well. He made a bit of a mistake coming into the chicane, missed the apex on the first part and that compromised him, so I think there was a little bit of time lost there and ultimately he was within a tenth and a half.

Mercedes challenging to drive on a low-grip track

Sochi was another track where Ferrari outperformed Mercedes, let’s not forget, my point being that in Sochi, Monaco and here in Budapest we’ve gone to three races where the Mercedes wasn’t a particularly easy car to drive. It looked really edgy, Lewis struggled to put a lap together in FP2, FP3 or qualifying and he didn’t really seem comfortable.

Valtteri didn’t seem particularly happy either, but ultimately it seemed like he was able to find that compromise a bit better when it came to qualifying. Perhaps that’s Lewis slightly over-driving it and that’s something that we’ve talked about before. Come the race, the track rubbers up, gets grippier and the weekend starts to come back towards Hamilton. That’s something we saw in Baku as well. Certainly in terms of qualifying pace, Valtteri seemed to have the upper hand.

Red Bull was pretty disappointed with the way the race went, and Ricciardo and Verstappen know they don’t have those extra engine modes to extract the power the drivers need in qualifying. But they were in the hunt. Going into the circuit on Sunday morning, I was keen to see how those top-three teams would play out because it was a clear one-stop race. But when it came to undercuts and things like that, they’d all have to watch each other. For the first time in a long while the race pace among the top-three teams was very similar on Friday, so it was a shame what happened to the two Red Bulls.

For Max it was just over-exuberance, he got carried away trying to clear as many cars as possible after running wide and losing out. Daniel chose his words wisely – I think his exact words were ‘sore loser’, or ‘sore *beep* loser’. Anyway, Max has come up, apologised and it’s a good thing they’ve got the summer break to cool off and move on from here. But it is a real shame because if you look at when Vettel was holding the pack back, the top-four pace wasn’t great and Max actually ended up only 13 or so seconds behind the winner, after serving a ten-second penalty. 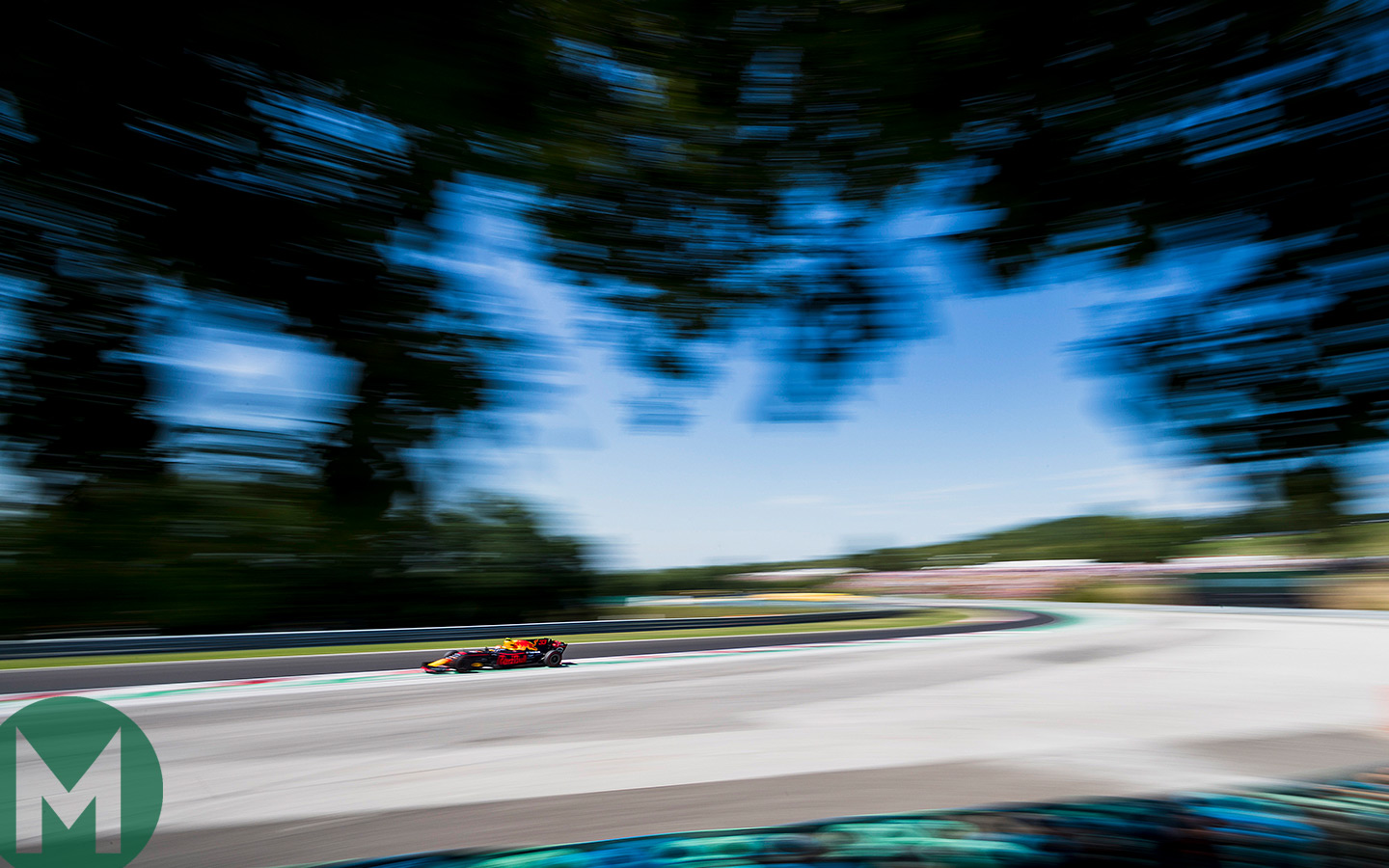 If they’d had a normal race we might have seen someone trying an aggressive two-stop or different strategies, which might have affected the race all the way up through the top-six. It’s a shame for the race as a whole that Max basically drove into Daniel.

For Sebastian, psychologically as a driver it is tricky when you know you’ve got an issue but you don’t know exactly what’s caused it and if it’s going to get worse. The team were telling him to stay off curbs and you could see on the on-board that the steering was off-centre, so he was having to steer to counter it down the straight. That creates a little rolling resistance as well.

Psychologically it hurts you, because you’re just nervous and counting down the laps, praying that it all holds together. Budapest is a track where you have to use the kerbs, you have to at the chicanes and in the mid-sector of the lap with all the changes of direction to get the right line. If you go slightly off line on the dust you just dump lap time, so it must have been a very edgy race for him in terms of the nerves, but he got there.

Kimi was quicker but couldn’t get past and it’s a shame, because I wonder if there were some sort of team orders involved there. Seb pitted, Kimi stayed out and did a mega lap when Seb was coming out of the pits. Kimi clearly was happy to stay out for a couple more laps, but Ferrari opted to call him in. Obviously they’d seen the Mercedes guys had gone to new tyres and didn’t want to get undercut by them, but I think equally they didn’t want Kimi to do an overcut on Seb. Kimi’s pace was still good and there was a risk that he could’ve got out ahead of Seb.

While that would have been good for Kimi, it wasn’t very good for the world championship battle and lets be honest, Ferrari have now backed one horse. They’ve chosen their man and they’re pushing Seb in this world championship battle against the two Mercedes guys. On the other side at Mercedes, we saw all sorts of team orders stuff going on there. I was really not sure Lewis would give that place up, thought he’d just run to the flag. In fairness Valtteri had dropped back nearly five seconds, which is a long way back.

Lewis invests his loyalty in Valtteri and Mercedes

People at Mercedes after the race said to me off the record that they think this is a good investment from Lewis for the future. He’s sort of bought Valtteri’s loyalty and shown the 1200 people at Brackley and Brixworth that he’s a team player. That’s important. Who knows, come the world championship battle in Abu Dhabi, there could be one of two things: either he could lose the championship by fewer than three points, in which case he’ll regret having done this, or he’ll need Valtteri at some stage to switch positions with him, in which case he’ll be thankful for what he did here. We’ll only see the repercussions when we get down towards the end of the season in November. Fascinating stuff, it was really a plot within a plot to see how that unfolded.

Alonso best of the rest, Vandoorne finally unlocks his potential

Nico Hülkenberg did a great job again in qualifying. It was a real shame for him with a gearbox penalty and then the issue in the pitstop, because otherwise I think he was on for sixth or seventh place. Renault have now shown for two races in a row, Silverstone and Budapest, that at two very different circuits they’ve got a car genuinely capable of being in the top eight. That’s huge encouragement for Enstone. I’m interested to see what happens with that Palmer seat for the rest of the year, because rumours are flying all over the place about Kubica, about Sirotkin, and with Palmer fighting his corner to stay. So that’s going to be interesting to follow through the summer break.

Also, a big shout out to McLaren. Stoffel Vandoorne has really come on at Silverstone and Budapest, he’s really unlocked the potential that we all know he’s got. All through the season and last year I’ve been saying that Vandoorne could be the best talent to arrive in F1 since Verstappen, and before that since Lewis. He is a very special talent and I’m interested to see how he develops. He’s been working really hard on his driving, he gets on well with his engineer Tom Stallard, and I think they’ve made great progress.

You run out of superlatives to describe how amazing Alonso is, but solid points, best of the rest, he really maximised the weekend.

Anyway, off to the summer break and I’m off to Madras to see my family tomorrow, and the dog, which will be great. We’ll join you all in Spa in a month’s time.