This Formula 1 season has been as unpredictable as 1982’s, albeit without the tragedy and critical injury. Thankfully. But how do they compare – to and with? 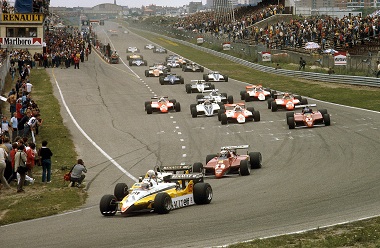 Both witnessed their 11th race by the end of July – the differences being that 1982 thus had five still to go whereas grandiloquent 2012 has nine, and 1982 did not ‘enjoy’ a month-long break to fit around an Olympiad: the old Hockenheim, the old Österreichring – bless it – and Dijon-Prenois (for the Swiss Grand Prix) were squeezed into its busy August.

But for the purposes of this article, Round 11 will be our pivot point/s.

In 1982, a driver in a Ferrari was ahead in the standings. Didier Pironi, however, was not receiving the plaudits that the superlative Fernando Alonso is today. The Frenchman, one of four drivers to have won two of those 11 Grands Prix, had burned his bridges with many because of his perceived treachery at Imola, the butterfly effect of which did not have to flap far or for long to trigger the chaos of team-mate Gilles Villeneuve’s fatal accident at Zolder in May.

A consummate victory at Zandvoort in early July, however, not only suggested that Dr Harvey Postlethwaite’s 126C2, with its honeycomb monocoque and mid-season introduction of pullrod front suspension, had dragged Ferrari into the construction and suspension ballparks, but also that Pironi was able to compartmentalise whatever emotions were swirling within. A second at Brands Hatch and a third at Paul Ricard, scene of Round 11, gave him a nine-point lead over McLaren’s John Watson and made him the clear favourite for the world title. 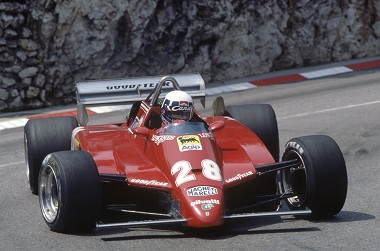 His score, however, would remain frozen on 39. Forever. Charging through the spooky mist of Hockenheim, a dry pole position in his pocket, he would crash rashly into the back of Alain Prost’s Renault.

Alonso is in a much better – and safer – position in his Ferrari, with its ‘novel’ pullrod front suspension. He has no internecine threat/politics to divert him such is the depth of Felipe Massa’s dip, while his closest rival, Red Bull’s Mark Webber, lies 40 points astern. That’s a 24.4 per cent margin of superiority; Pironi was 23 per cent ahead of Watson.

The current points system, however, has nullified some of Alonso’s opportunism. Had he been working to the old – and better – 9-6-4-3-2-1, he’d be 32.7 per cent to the good, on 49 points to Webber and Sebastian Vettel’s 33. Lewis Hamilton, like Webber – and Pironi, Watson, Prost and the returning Niki Lauda in 1982 – a two-time winner already this season, would be relatively closer to the Red Bulls but further removed from Alonso on 32.

But nothing is certain in 2012, no matter which way you calculate it.

Thirty years ago, a driver without a GP victory to his name lay 16 points – that’s 41 per cent – behind Pironi in fifth. Keke Rosberg was Williams’s punt after Alan Jones had retired. And when Carlos Reutemann did the same after just two GPs in 1982, the Finn inherited the leadership of the team. 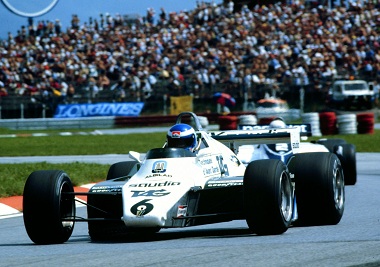 Kimi Räikkönen shares little with Rosberg beyond his nationality, first initial, speed, title of world champion. Oh, and the fact that he too lies fifth in a championship – 29.2 per cent behind Alonso – despite not yet having registered a win this season.

As did the more bumptious Lauda, the returning Räikkönen has slotted neatly back in. The ‘Lotus’, both in his and Romain Grosjean’s hands, has been competitive throughout, and what few words are emanating from Kimi’s side of the garage suggest that he is continuing to dial into the E20 and extract more from it. There’s victory in the air.

Rosberg opened – and closed, as it turned out – his 1982 win account at Round 14, Dijon, having been pipped by the (proper) Lotus nose-cone of Elio de Angelis in Austria two weeks before. These results hoisted him three points ahead of Pironi, with two rounds – Monza and Las Vegas – remaining. 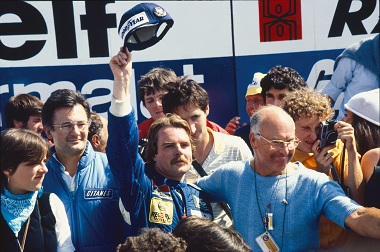 His title was thus secure, and the season done, by 25 September, it having, admittedly, started in January in South Africa. The current F1 juggernaut will rumble until 25 November, via Belgium, Italy, the floodlights of Singapore, Japan, South Korea, India, Abu Dhabi, Austin in America, and Brazil. Twenty races, as were 1982’s three Stateside rounds – Long Beach, Detroit and Las Vegas – are two too many. At least.

If long shot Räikkönen is to become the 2012 world champion, he will have to make them all count, of course, because of the exceptional reliability of the modern F1 car. In 1982, only the best 11 of 16 scores counted towards a driver’s end tally – and even Rosberg had only 10 to tally at the end. (It would have been 11 had his FW07C not been disqualified from second place in Brazil for being underweight.)

Alonso already has 11 scores – nine in ‘old money’ – Webber and Räikkönen 10, and Vettel and Hamilton nine.

What’s more, they’re battling McLaren and Renault power today, as they were 30 years ago.

Formula One is remarkable not only in terms of how much has changed since 1982, but also by how much has remained the same.