Back in 1973 and ’74 James Hunt leaped from a frustrating few years as a struggling, often ridiculed Formula 3 driver to become a new F1 star with Lord Hesketh’s irreverent, Union Jack-waving team.

A few years later Hunt would win the 1976 World Championship after a dramatic battle with Niki Lauda, inspiring Ron Howard’s new movie Rush, but in ‘73 and ’74 he made an early impression in America in a handful of Can-Am and Formula 5000 races.

I first met James at Elkhart Lake in the summer of ’73 when he was hired by Don Nichols on a one-off basis to drive a twin-turbo Chevy V8-powered Shadow DN2 Can-Am car. The Can-Am series was dominated that year by Mark Donohue aboard Roger Penske’s turbo Porsche 917/30K and as everyone struggled unsuccessfully to compete with Donohue’s 1000+ horsepower 917/30K, Nichols asked his team to stuff a twin-turbo V8 into one of his uncompetitive Shadows. 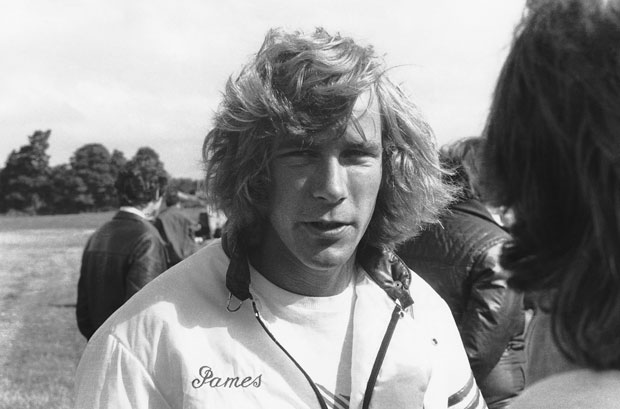 Jackie Oliver would win the final Can-Am championship the following year with a much more refined Shadow DN4 but in ’73 he was thrashing in the mid-field, well off Donohue’s pace. At Elkhart, Oliver was no less than ten seconds slower than Donohue and Hunt could do no better with the monster twin-turbo Shadow. James made it home a lap down in seventh place in Saturday’s sprint race and neither he nor Oliver started Sunday’s longer, points-paying race.

I remember James wandering the paddock wearing washed-out bell bottom jeans and an undersized pink T-shirt exposing his midriff and belly button. He was unimpressed with the Shadow. “I was hoping to enjoy some real horsepower,” he grinned. “But the thing is really slow to respond and when the power does come in it just spins the wheels in any gear. It’s really not much fun and racing that thing is like doing press-ups in a steam sauna for an hour.”

The following year Dan Gurney hired James to drive his latest Eagle F5000 car in the two season-closing races at Laguna Seca and Riverside. He showed his talent by qualifying third at Laguna behind Mario Andretti and Brian Redman and finishing a distant second to Redman in the race after Andretti suffered a flat tyre. At Riverside Hunt qualified the Eagle sixth, finished fourth in his heat and was running fifth in the final when he spun with two laps to go.

At Laguna Seca there was an impromptu party one evening where James amiably quaffed a few beers, smoked some cigarettes and happily puffed away at a funny, hand-rolled California cigarette somebody had produced. In those days there was no delineation between drivers and press people, no PR types to get in the way, and no recriminations for anyone enjoying themselves as they saw fit. Indeed, we all entered into the fun together. 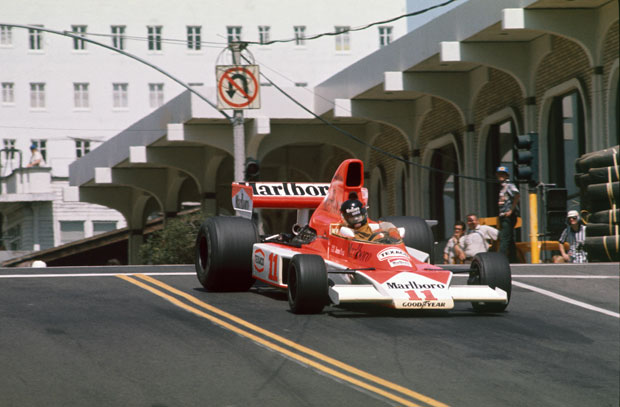 A few years later in 1976 at the first F1 race at Long Beach, James was a front-runner in his first year with McLaren. He qualified on the pole for the year’s first two F1 races and finished second to Niki Lauda in South Africa. Hunt and Lauda would go on to engage in a classic world championship duel and at Long Beach they qualified third and fourth – Hunt ahead of Lauda – behind Clay Regazzoni and Patrick Depailler. But in the race Hunt flew off the track at the first turn, creating a renowned photograph that would serve as a promotional vehicle for the race over the next few years.

During that weekend I was asked to write a story about James for a long-gone monthly magazine called Sport. At the time, Sport was a rival for the weekly Sports Illustrated and they wanted a long story explaining where this guy Hunt had come from and what made him tick. I told James about the assignment – again no PR men to get between us in those days ­– and he suggested I fly to New York with him the day after the race.

We met at LAX and James and his girlfriend ‘Hot Loins’ boarded the first-class section of the flight as I filed into steerage. During the cross-country flight James sauntered back a few times to where I was sitting for some light banter. He was wearing cut-off jeans and ‘Hot Loins’ was showing her long legs below an even shorter skirt.

I remember the guy sitting next to me asking: “Who is that guy? Is he some kind of British royalty or something?” I explained that he was a Formula 1 driver who was just emerging as one of the world’s best racers, but the guy had no idea what I was talking about.

After we landed in New York we shared a cab to Manhattan and checked into a hotel. James suggested we dine on room service and spend the next day talking about his life and career for the Sport story. Before the food arrived he called a friend of his who came over with a few of those funny Californian cigarettes to complete our evening. We spent the next day chatting amiably before James and ‘Hot Loins’ flew home to London and I set about writing my story.

Some 15 years later I had the pleasure of sharing a table at the Autosport Awards with James, Innes Ireland, Nigel Roebuck, Eoin Young and Maurice Hamilton. By that time James was Murray Walker’s sidekick on the BBC’s F1 broadcasts and Innes was covering F1 for Road & Track and we had a grand time, as you can imagine, with James and Innes telling hilarious stories amid plenty of wine. At the end of the evening James took off his tux, folded it into his backpack and cycled home through the night to Wimbledon. A year or two later both James and Innes were gone, James the victim of a heart attack and Innes from cancer.

Looking back, it’s stunning to take on board how different things are today. James and Innes were from another age and would have no interest in today’s self-important, stuffed-shirt, politically correct F1 world. I’m sure, wherever their spirits may reside, they’re enjoying a libation or two, grinning and laughing irreverently.