There are two ways of getting ahead of rivals in Formula 1: make your car faster, or make theirs slower.

It’s not quite as simple as just focusing on the car, either, as there are other aspects of the regulations that can be targeted to make gains. And all gains are relative, so if you manage to slow a rival down without slowing yourselves, you’ve made a gain.

And to that end, Mercedes has employed the oldest trick in the book when it comes to pitstops.

With Red Bull regularly setting world records for stops under the two-second mark, Mercedes found itself at a disadvantage this year, as Mark Hughes explains in more detail in the latest issue of Motor Sport.

Pitstops were not an area Toto Wolff’s team had needed to prioritise in the past, such was its dominance over the rest of the field. It was never coming down to the tiny margins, so it could focus on other areas.

But this year, it is coming down to the tiny margins, as the race in Paul Ricard showed. Lewis Hamilton actually had a pit stop that was 0.1sec quicker than Max Verstappen’s, but the overall loss of around 0.6sec through the pit lane meant he emerged the wrong side of his rival heading into Turn One, and with that the race got away. 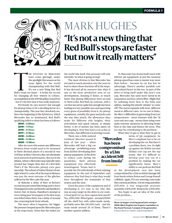 The pitstops of Mercedes have come glaringly under the spotlight this season as the team fights for the world championship with Red Bull. It’s not a new thing that Red…

And a few weeks prior to that, Mercedes had set a process in motion that might slow Red Bull further through the pit stop phase. In these situations, teams don’t go to the FIA and say “We want you to stop what X is doing.” They ask the question in a very different way.

“We enquired with the FIA on a safety mechanism which is related to a system that we were using and whether that could be optimised,” Wolff admitted on Friday in Austria. “That happened, I would say, three or four weeks ago and it was a technology question. Did that trigger anything else? Maybe, I don’t know, but this is the question we’ve asked.”

Almost certainly, that question from Mercedes came because it strongly suspected it knew what Red Bull was doing with regards to its pit stops, and felt it might not be allowed if flagged up. But instead of claiming Red Bull was doing it, Mercedes simply asked whether it could do it too.

What then happens is the FIA responds with its interpretation of the situation, and where it is a clear case of “No, you can’t do that”, then a technical directive might follow to inform the rest of the grid. Anyone who was doing that – or similar – is then compelled to make changes.

In this case, it’s a technical directive that mandates the inclusion of a tolerance for human reaction time during certain pit stop procedures, like when the wheel gun operator indicates their job is complete, or the window between all four wheels being fitted and the car dropped to the ground to the driver being given the green light to leave.

Christian Horner has been there before when Red Bull had the fastest car at the end of the V8 era, and knows it’s just another battle between title protagonists, only one that is happening off the track.

“The technical directive is certainly very wordy and you’d almost have to question whether it’s a change of regulation,” Horner said. “But I suppose we have been very competitive, we’ve got the world record on pit stops. We’ve had the majority of the fastest stops, and it’s not by accident.

“I find it a little disappointing because it’s the duty of the competitor to make sure that the car is safe. The penalty for a wheel not being fixed is that you have to stop the car immediately, so it’s a brutal punishment if you haven’t got all four wheels securely and safely fastened.

“So what the technical directive is trying to achieve, I’m not quite sure. I think there’s an awful lot of complexity to it. Of course when you are in a competitive situation, if you can’t be beaten, then the most obvious thing is for your competitors to try and slow you down. And that’s obviously what’s happening here.”

It might be a big talking point today, but behind the scenes there has been movement over a number of months relating to pit stops, which tallies with the fact that Red Bull’s fastest pit stop of the season came in the first round in Bahrain, where Verstappen was serviced in 1.93sec.

“I think it’s already slowed pit stops this year, after the earlier discussions and directives that have been on the pit stops and I think to have to hold the car for two-tenths of a second, you can almost argue it’s dangerous because you are judging the gaps and the guy releasing the car is having to make that judgement,” said Horner. “I think it’s not been well thought through.

“F1 is about innovation and seeing pit stops at sub-two seconds is a remarkable feat and we should be encouraging it, not trying to control it. Otherwise, where does it stop? We are going to be told which way to walk into the garage, where we should sit on the pit wall and which buttons we should press I guess.”

That’s not to say Red Bull hasn’t been adopting a similar approach, calling on the FIA to analyse the Mercedes front wing in the same way its rear wing was scrutinised in recent weeks.

“Obviously a lot of noise was made about the rear wing, new tests were introduced and the car was obviously fully compliant with those rules at all times. But I think it would be disingenuous of the FIA not to look at the front wing in the same way.

“Of course we’ve seen footage across recent races and we’re just looking for consistency. Consistency of application of the regulation that dealt with the rear wing, and obviously the front wing falls into that same category. So I think the main thing that we are seeking through all of this is a consistent application.”

As the pair went back and forth over various topics, there was at least an admission from Wolff that it’s part of the game. As a heavily-regulated sport, an F1 championship is not won just by being savvy on the track…

“Consistency is important,” Wolff said. “Like Christian said, it’s a competitive field and a competitive sport. It’s about exploiting and where Red Bull is today is where we’ve been over many years. I remember DAS last year – you’re obviously trying to gain a competitive advantage and that’s fair enough. On front wings, it’s the same thing. If there’s something to look at then the FIA will look at it and whatever the decision is we will go with that.”

The finger-pointing continued with Lewis Hamilton’s comments about Red Bull’s straight-line speed at Paul Ricard following the introduction of a new Honda power unit, as again what might seem like a throwaway line could become reported widely enough that the FIA just check, just in case.

That’s the sort of comment that is just testing the water, voicing a bit of a conspiracy theory that might rattle a rival, even if you don’t take it any further. It clearly annoyed Horner, who said Wolff should ensure Hamilton is better informed after the Mercedes boss rightly highlighted the lower drag level of the Red Bull as having an impact.

“I think you can see there’s an awful lot of pointed activity in our direction at the moment, but that comes with the territory of being competitive,” Horner added. “An awful lot of energy is going in to try and slow the car down, which is obviously what happens in a competitive business. It’s something that we are used to but not losing too much sleep about.”

It’s a good job they’re not losing sleep, because this title battle is so close, both teams are going to be very used to it by the end of the year.