Examining the character of Mick Schumacher, the 20-year-old F2 rookie who will test a Ferrari F1 car next week 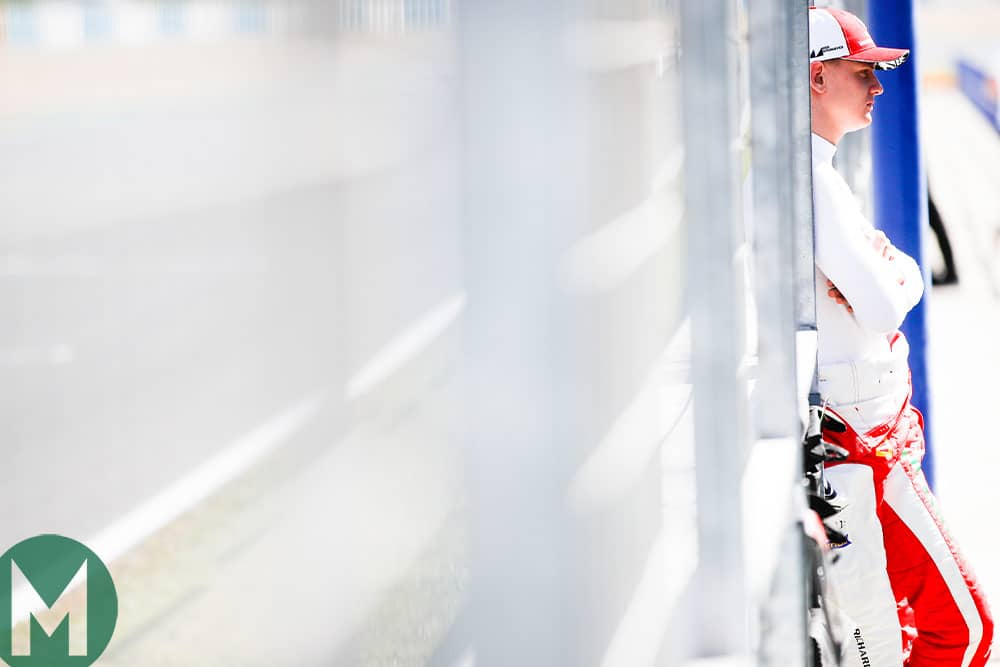 Some of the mannerisms are spookily familiar as Mick Schumacher faces the Formula 1 media for the first time.

It’s the way he tilts his head as he listens to a question, how he forms his mouth when holding himself back from opening up into territory he doesn’t wish to. But regardless of the very necessary protective shield he keeps around himself, the overwhelming impression is one of a genuinely pleasant young guy.

There’s an underlying shyness but the smile comes easy and genuine. There’s intelligence behind those blue eyes and surprisingly they are not like a rabbit’s in the headlights as he emerges from the Prema F2 team’s garage to an orchestra pit’s-worth of journalists and photographers. This might be the biggest media gathering he’s yet faced but as Michael Schumacher’s son daring to step into the territory of racing driver, the spotlight is something he’s made an uneasy peace with over the last few years.

Back when dad was active, a bit of karting used to be just a nice family thing the media circus was largely unaware of. He raced under his mother’s maiden name and everything was good, with the cocoon of privilege and privacy around him and dad Michael on hand to encourage and help.

After the devastation on the ski slope five years ago, it would have been understandable if Mick, then 15, had quietly slipped out of the racing environment to give himself time to grow into his skin.

But he had the bug, that insistent hold that racing can have on a person. And maybe, in the helmeted solitude of the race track, there was solace, some sort of escape.

“What he has done is the best ever in F1; it is something I look up to and I am happy to have him as my dad”

Those questions might only be answered in time, but as he continued and progressed – Formula 4 from 2015, runner up in the German and Italian series in ’16, F3 from ’17, winning the ‘18 European title – and assumed the Schumacher name in his racing, so the spotlight inevitably picked him out.

He’s super composed – but then he needs to be. On this weekend in Bahrain he will make his Formula 2 debut. With that out the way, he makes his debut as an F1 test driver for Scuderia Ferrari next Tuesday, then exchanges his Ferrari overalls for those of Alfa Romeo and gets in his second day of F1 testing on Wednesday.

From the outside it feels like way too much to be piling onto a 20-year-old driver – F2 and F1 debuts on the same weekend with three different teams and cars! Not to mention the emotional potency of a Schumacher in red once more, leaving the garage and heading out into the pack.

He appears to be letting it wash over him. “I am thinking 100 per cent of my F2 programme,” he says. “I’m focusing on this. We see about the tests when we get there.” There is structure in his approach, that much is obvious from the way he answers questions.

But there’s got to be a concern that because of the power of the name, the potency of the back story and of how much the world wants to see the Schumacher story continue – with Mick as the new bearer of a re-lit torch, carrying the light his dad’s tragic twilight fate had apparently extinguished – that he might be being pushed too hard, too soon.

That there’s potentially too much money to be made to give him a chance to breathe. It’s a natural concern but up close and knowing some of those around him, I don’t believe it’s actually like that from the inside.

Although he doesn’t possess the born-in-a-circus persona of his family friend Max Verstappen – there is much more of a delineation between the private person and the racer – he absolutely gives off the conviction that this is what he wants to do with his life. 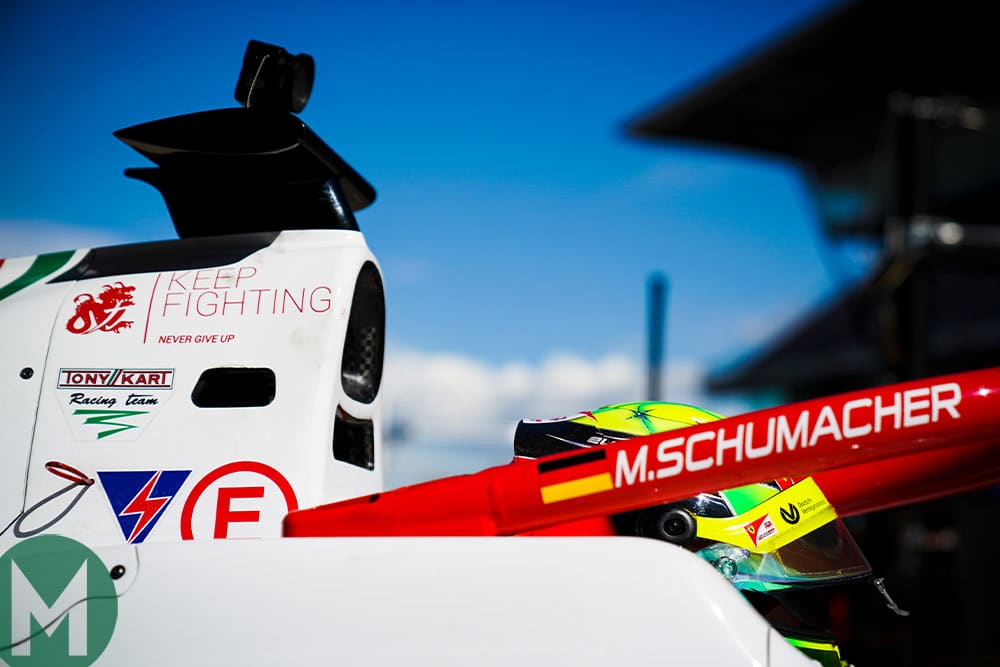 Ask if there was a moment when he made that decision and he replies, “I guess I can’t really say there was a certain moment.

“Really it was in karts where I really decided that’s what I want to do, the profession I want as a career and job.

“We started from that point to take it quite seriously and it worked out well.”

Others close say they observed a change, a new level of intensity, this time last year, on the eve of his sophomore F3 season. Maybe the blue touch paper had been lit at Spa 2017 when he visited a grand prix for the first time as a professional driver rather than as a kid. “I was happy as a child to be able to see everything I wanted to see but the first real time was when I re-entered an F1 paddock and was able to go to the teams and see everything and get a feel for what was happening in F1…

“It was better than I expected it to be. It was quicker, it was better, it was just more everything. The cars looked beautiful and to be an F1 driver is something very special, there are only 20, and if you are amongst them it is something that you dream of.”

Part-way through last season, something clicked – and from being merely generally competitive, he stepped up and became The Man, winning 10 races in the latter half of the year on his way to the title. Naturally, the step-like change led to conspiracy murmurings. The better he performs, the more such cynical interpretations will come to the fore. That’s just one of the crosses his back story means he has to bear.

His own explanation is much simpler and actually more intriguing. “I guess it’s really just like a knot that popped, that opened and then everything went the right way.

“I think it came from using the experience I got in the races, to use that in a good way. It was something that I managed and was able to keep it through and in that period I also feel that I grew a lot as a person and really matured.”

But for a long time yet, he will inevitably be seen as a refraction of his father, more than as a racing driver in his own right. Does that not unnerve a person, especially one so young and previously sheltered? “It is a difficult question. It is part of me. I am the son of my dad and I am happy that I am.

“What he has done is the best ever in F1; it is something I look up to and I am happy to have him as my dad… It has always been part of me. I kind of had the time and the chance to grow into that. I had a lot of people behind me who helped me on the path.”

There’s a moment, under the media glare in Bahrain, where a flash of his genes pops out unannounced into the ether, just a brief split-second of revelation, that makes you a little less concerned for him.

Asked if he feels ready for his first F1 tests he replies that he’s totally confident he’s ready. But what gives him that confidence, he’s asked. “I just am,” he flashes back.

There’s the racers edge, the contemptuous dismissal of doubt. It’s there just below the surface. He’s probably going to be OK.