The competitive swings between Red Bull and Mercedes, between Lewis Hamilton and Max Verstappen, between the operations of the two teams are wild now that we have two combinations so closely matched on raw performance.

In Portimão Hamilton and Mercedes won the second race of three in a car which might or might not have been faster than the Red Bull-Honda. But it wasn’t the relative performance of the cars which decided it. There were any number of crucial moments which could have flipped the outcome one way or the other.

Portimão is a wild and windy place even as the sun is burning the fine-grained and gripless tarmac. The gusts are strong and enhanced by the big elevations of the track. The worst place is probably Turn 11 right at the very peak of the layout, but the cars are criss-crossing the wind constantly – and this generation of car, with that big ‘sail’ engine cover and trimmed back rear downforce, is really very susceptible to cross winds. Especially when the hard-compound tyres and low grip surface aren’t inclined to help.

But you cannot drive slowly in anticipation of a random gust. Everyone just attacks as normal and deals with whatever cards gets blown at them. So as Verstappen crossed that wind through the hairpin of Turn 5 on his first Q3 lap, the rear of the car stepped wildly out of line on the exit. He caught it beautifully and kept his foot hard in, but it had taken him those crucial few centimetres outside the line. It would have been pole by the margin of 0.15sec. 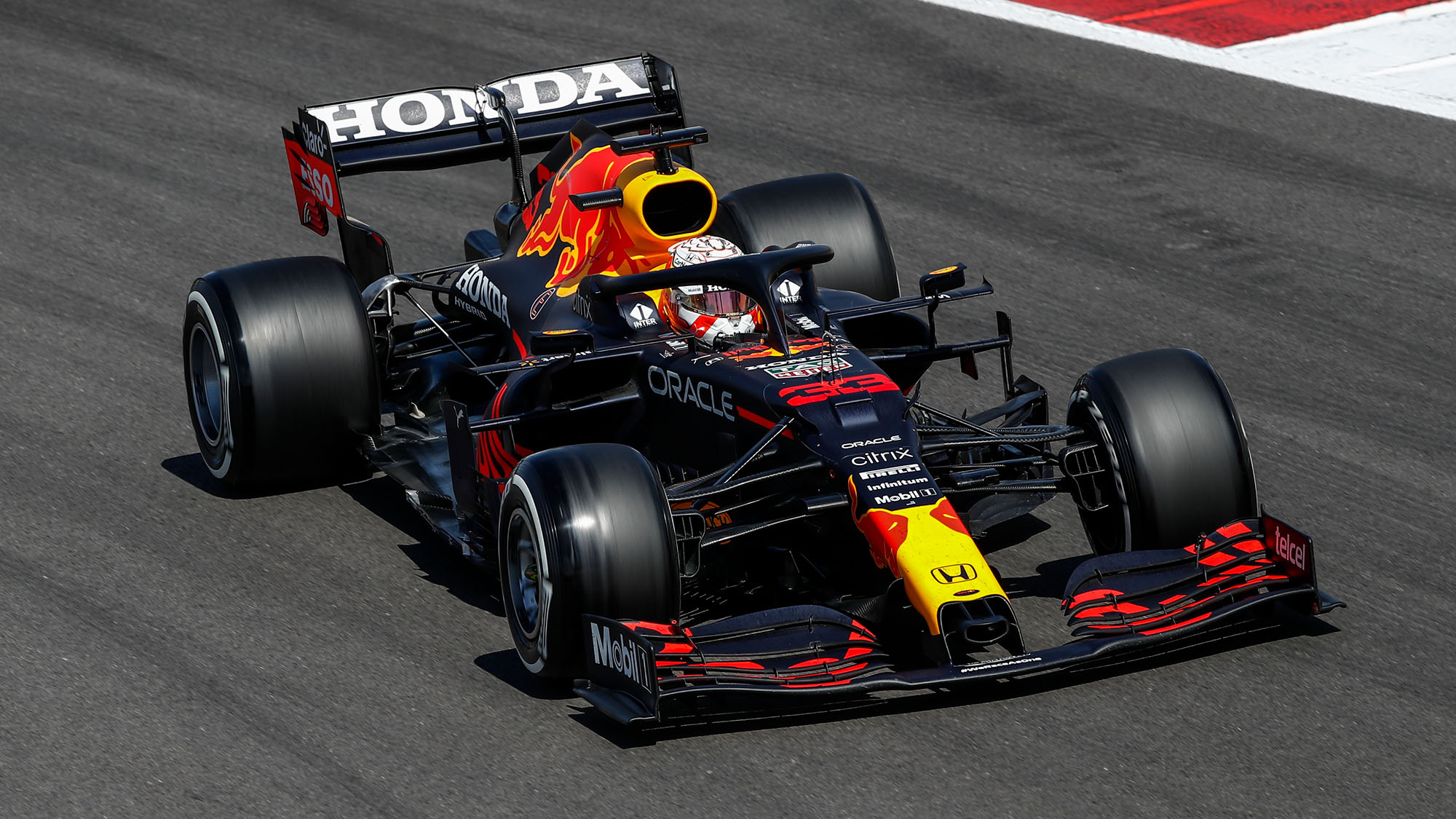 Gusts of wind came at just the wrong time for Verstappen

Not that the Red Bull was definitely faster. Hamilton in Q2, when the conditions were calmer had set – on a set of mediums – a stunning time 0.6sec clear of the field and more than 0.3sec faster than Valtteri Bottas’s pole time in Q3. The track was at its quickest in Q2, the wind was building up in ferocity through Q3. But no-one got their perfect laps together, as Merc’s Andrew Shovlin pointed out. “Valtteri was on a really good lap [in Q3] and he just lost the rear. On the lap that earned him pole, he lost the rear in the last few corners and lost a big chunk of time and it was one of those days that if you put together the perfect lap, you’d have probably been on pole by a mile… the big issue was just the wind and the fact that once you lost the rear and you started sliding, the grip never really recovered for the remainder of the lap.” 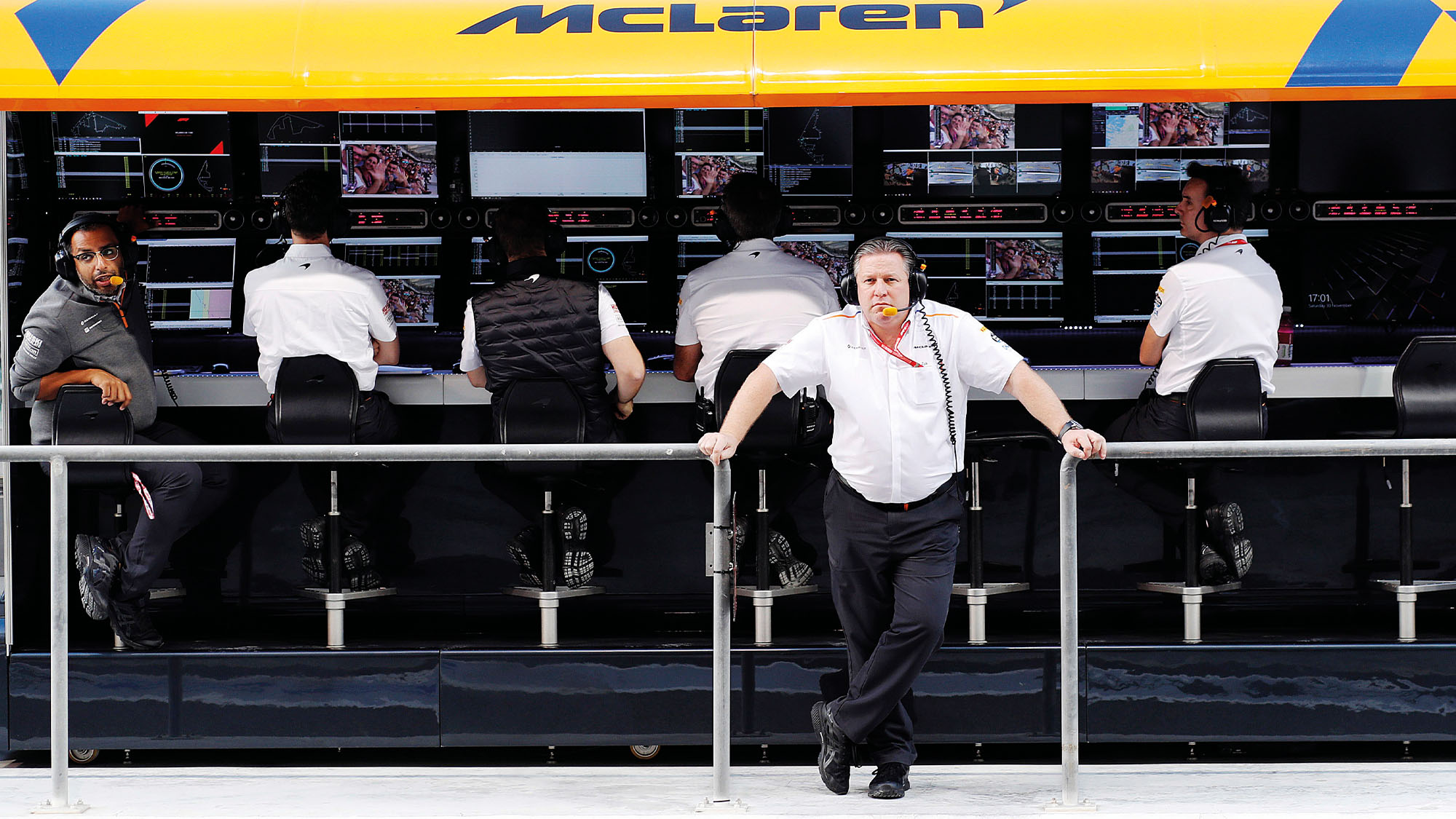 With the track getting windier and slower all the time, the second Q3 runs were about 0.3sec slower for most. So Verstappen was unable to copy-and-paste that potential pole lap but without the error. Bottas’ compromised lap was good for pole, by 0.007sec, from Hamilton.

Without that gust, Verstappen would have been on pole – but it was really only luck that his gust was different to Bottas’s. Starting from pole, he’d likely not have been behind Bottas on lap 10-11, trying hard to get into his slipstream through the final corners and getting a mild tank-slapper that allowed Hamilton to tow past, redressing Verstappen getting the jump on Hamilton on the lap 7 restart. And without that, Verstappen may well have been able to control it from the front. But that wasn’t how random worked on this occasion.

Bottas had set pole, he’d won the start. Very often that’s 70% of the job of winning a grand prix done. But not on this occasion. Bottas is much more sensitive to changes in balance to the car than either Hamilton or Verstappen – and this was a very changeable balance sort of weekend. 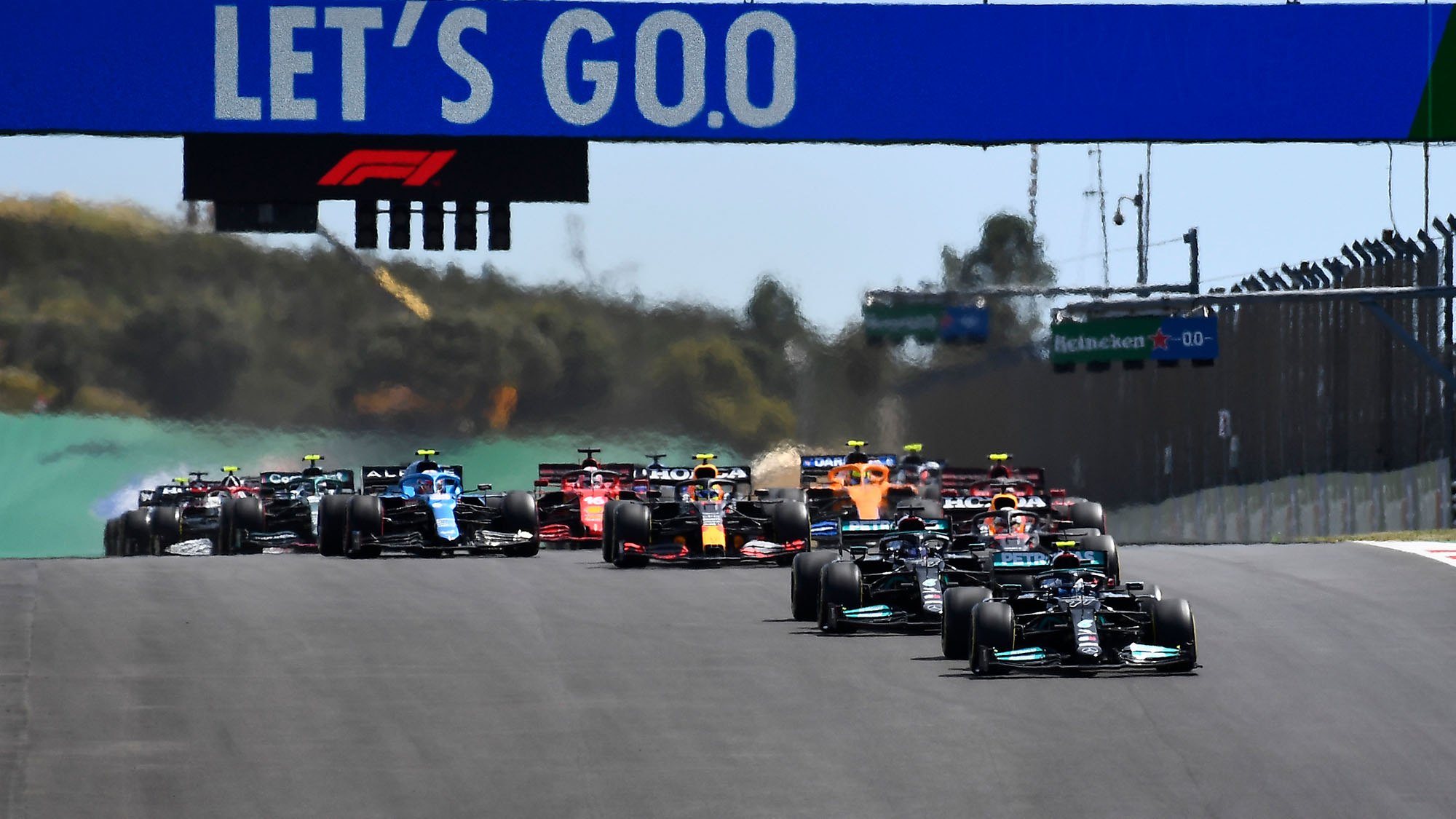 Bottas lead initially, but his sensitivity to the Merc’s imbalance made him easy prey for the chasing pair

He simply didn’t like how the Merc felt on the medium tyres on which he’d started. The softs wouldn’t have made possible a good strategy because of how they tended to grain. The hards were a little reluctant to switch on. The mediums were a good compromise between the two. But Bottas much preferred the feel of the car later on, when he got onto the hards.

When he gets an imbalance that maybe theoretically costs a tenth, his sensitivity to the change can often make it much more than that. So it was on this occasion and though he was able to set a pace which still allowed the Mercedes and Red Bull to leave the rest of the field far behind, it was a pace that was seriously holding up Verstappen and Hamilton. (Max had jumped a distracted Hamilton on the restart after a safety car caused by Kimi Räikkönen thumping his Alfa into the back of his team mate and leaving a big mess of carbon fibre all over the track).

Had Bottas not been struggling so much on the mediums, had he found the balance he later had on the hards, this may have been his race. But it wasn’t.

Twice in this race and once in last October’s at the same venue, Hamilton made successful overtakes by being able to run close behind the car in front through the fast loop of turns 14-15 which leads the car onto the pit straight. Thereby making the DRS much more powerful. 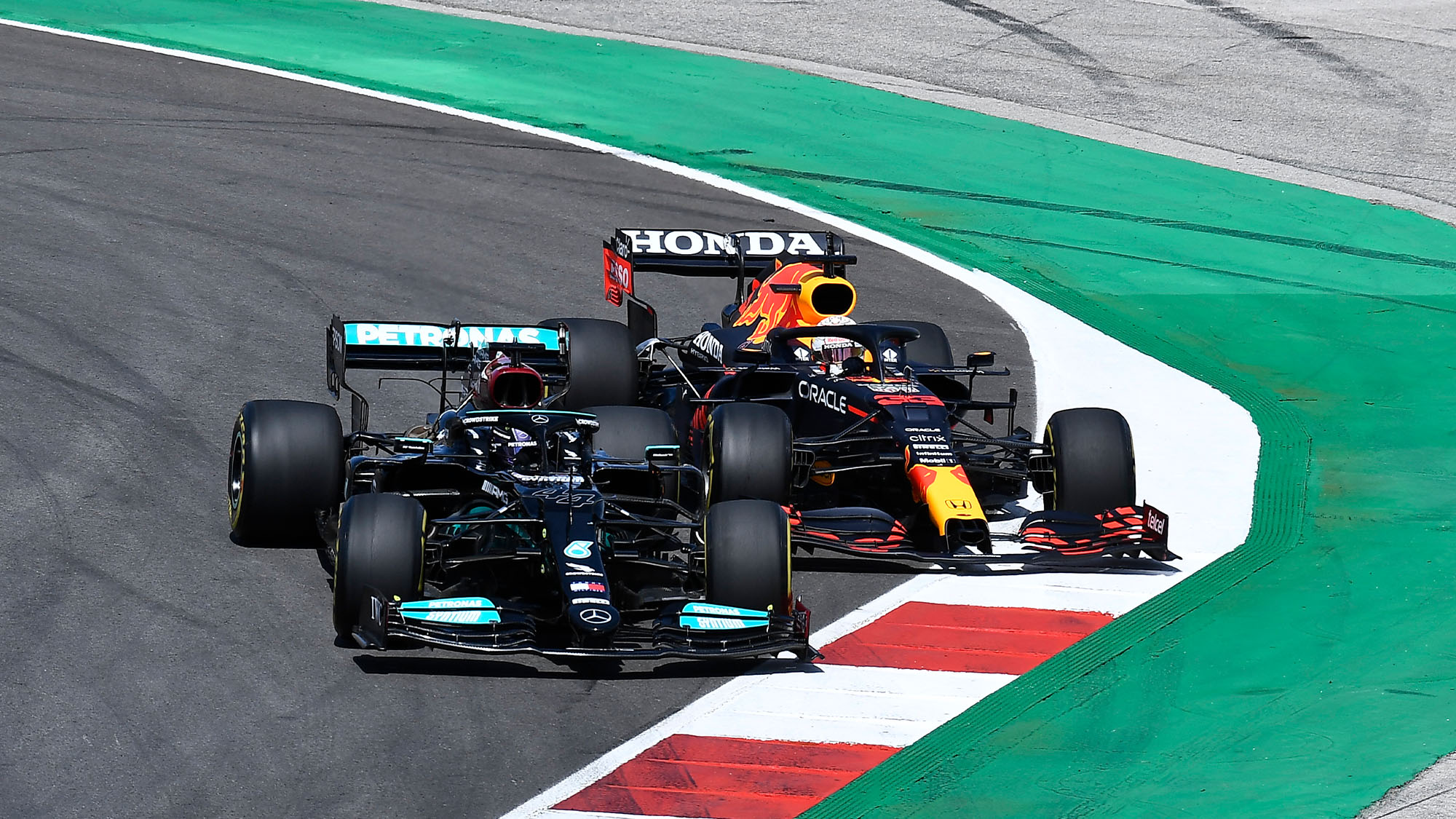 Hamilton made good on his tyre use, helping him get past Verstappen and Bottas

Normally an F1 car cannot follow so closely through fast corners because the wake of the leading car destroys the airflow over the surfaces of the following car, losing it valuable downforce. But another crucial part of that mechanism are the tyres, which normally overheat very quickly when in the turbulent air of that leading car. Here, because the tarmac is so gripless and Pirelli brought the hardest compound tyres in their range, there was a way of keeping the tyres within their optimum temperature window even if close behind another car.

Verstappen didn’t find it. But Hamilton again did. He would back away from the car ahead through the twisty middle section where passing isn’t possible. But close up into the tight Turn 13 hairpin, the drive out of which determines your momentum through those long curves which follow onto the pit straight. How much of those optimum front tyre temperatures were to do with the Mercedes and how much to how Hamilton had cannily placed himself beforehand?

So as Verstappen tried to get close to Bottas through Turns 14-15 but suffered a big wobble, so Hamilton was there, ready to pounce, as he always ensured he was right there in that crucial place. It was just a matter of time.

All that remained was to pass Bottas – still unhappy on his first stint mediums. Valtteri saw him coming fast, placed himself very defensively on the inside but the Turn 1-2 sequence here is a hard one to defend. The shorter line costs a lot of speed. Hamilton kept the momentum, pinned Bottas in tight and enjoyed the fast long way round, leaving Bottas to later be jumped by Verstappen on his out-lap new hards.

It will be different again in Barcelona. But we can be confident Hamilton and Verstappen will be right in the middle of it.