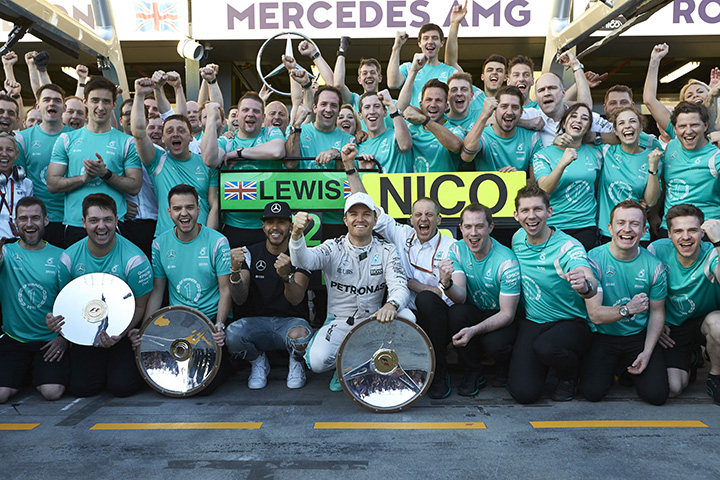 1) Nico Rosberg made it four wins in a row to start the new season.

2) There was barely a dissenting voice from the verdict of the new qualifying system. The broad intention – of creating more jeopardy to mix the grid up – may have had merit, but the detail of it had not been adequately thought through. Damon Hill best summed up the wet squib aspect of how it led pole to being set with four minutes still to go: “Lewis had time to wave his own chequered flag.” Lewis Hamilton secured his 50th career pole. 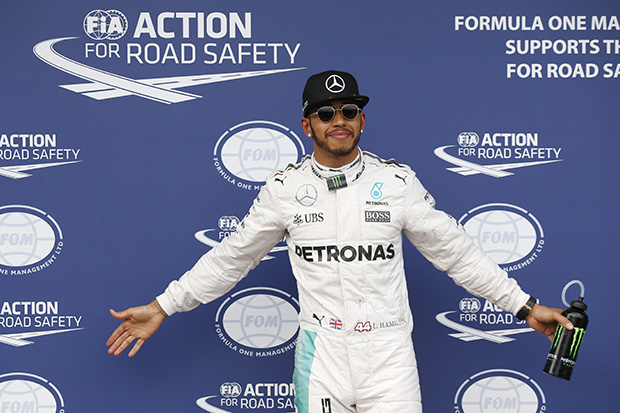 3) The tension was cranked up a notch as the start was aborted, the field sent on its way for another formation lap. The problem was Danil Kvyat’s Red Bull, which had suffered an electrical failure related to the ERS-h just short of the grid. It was the second successive year he’d retired before the race had even begun.

4) The combination of the new single-stage operation of the clutch together with how the radio restrictions now apply to its operation – putting it fully back in the driver’s control – did what it was intended to do by bringing more variability to the quality of the starts. Hamilton’s was awful, the car bogging down badly, Rosberg’s alongside was average from the dirty side of the grid, but Sebastian Vettel’s from row two was a flyer, enabling him to thread between the silver cars even before the first turn.

5) Rosberg tried to reclaim the lead from the Ferrari by braking late on the inside, but Seb was the crucial amount ahead as he turned in, Rosberg’s late braking took him out wide, to where Hamilton already was, forcing the latter to back off, Lewis lightly catching his front wing on the back of the other Mercedes. Hamilton’s lost momentum allowed Max Verstappen and Felipe Massa to overtake.

6) Hamilton was soon complaining that he couldn’t do anything about getting past Verstappen either despite being potentially much faster. As his front tyres grained up every time he ran too long in the Toro Rosso’s slipstream, he was urging the team to think of an alternative strategy. Although the new pits-to-radio restrictions were largely still in place, the specifics of a team being able to discuss strategy with a driver had been eased on the eve of the race. 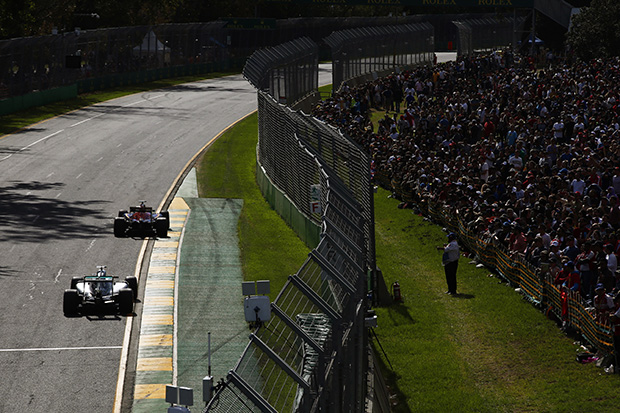 7) Vettel continued serenely on his way. His gap over his team-mate was out at around 2.5s and Rosberg had despaired of finding a way by Kimi Räikkönen on track. On the 12th lap – as soon he he’d pulled out enough time over Nico Hulkenberg that he could clear the Force India if he pitted – Mercedes brought him in. He was fitted with a new set of soft tyres and got out critically just ahead of the Force India.

8) This forced Ferrari into prioritising Vettel. Räikkönen had effectively already lost the place – so close had Rosberg been behind him when he pitted, so much quicker would he be on his new tyres than Kimi could go on his old. The urgent need was to protect Vettel’s position – and so Seb was called in on the next lap, and fitted with another set of super-softs – the new ones he’d saved by not doing a second Q3 run the day before. He exited around 1s ahead of Rosberg, putting Räikkönen into a temporary lead.

9) With Rosberg on his tail, Vettel had quickly caught the old-tyred Hamilton. But he dealt with him easily, the tyre performance difference allowing Seb to go around Hamilton’s outside at turn two.

10) The race was quite nicely poised at this point – with the tyre variance between Vettel and Rosberg particularly interesting. Rosberg’s softs could potentially stay in shape for as much as 10 laps longer than Vettel’s super-softs, but the latter would be around 1s faster initially.

11) On the 200mph run down to the turn three braking zone, the race’s complexion changed. Fernando Alonso – slipstreaming Esteban Gutiérrez’s Haas – switched across to the outside at just the moment Esteban was easing that way to take up his line. The gap was no longer there, the McLaren’s right-front hit the Haas left-rear and an aircraft-type accident unfolded with extraordinary violence, the McLaren rebounding into the wall on the left, then rolling as it dug into the gravel trap before rearing into the air once more, ending its flight a crumpled wreck on its side in the wall. 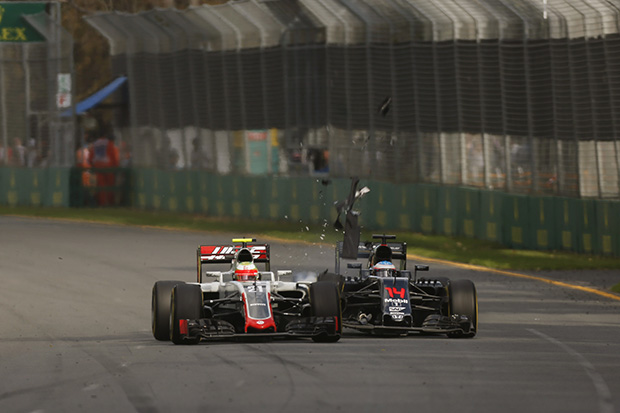 12) With the race neutralised, everyone was free to fit new tyres – totally changing the complexion of the race. Ferrari was nervous of the medium tyre – and thereby took themselves out of being able to one-stop. Mercedes didn’t think there was any real question and went confidently with mediums and the intention of not stopping – and was surprised as the blankets came off the Ferraris to reveal the red-striped super-softs.

13) Red Bull and Toro Rosso opted wholesale to try to get to the end on new softs – certainly an aggressive choice, but the Red Bull at least is usually easier on the rubber than most others.

14) The red flag was perfectly timed for Romain Grosjean. As the only driver who’d yet to stop, he got his tyre change – onto mediums – for free and thus remained in ninth place.

15) After the re-start, as far as Rosberg was concerned the race was coming to him. What he didn’t know – because of the radio restrictions – was that his front-right brake caliper temperature was creeping ever upwards and giving the team real cause for concern. Previously, they would have alerted him and he could have compensated with his settings and driving style, but until it was actually dangerous rather than merely not on-course to last the race, he couldn’t be told.

16) Both Verstappen and Sainz were on the radio encouraging the team to bring them in for new tyres as the softs were just not working for them. As Verstappen saw Sainz disappear out of his mirrors and into the pitlane he was understandably miffed. He too had been asking to pit but had not received permission. As the driver running ahead, he might have expected to have been given priority. In a fury, he announced to the team he was coming in. He arrived there and his mediums were not ready, delaying him further vital seconds. He was even less impressed when he rejoined to find that Sainz was now ahead of him. He began to vent over the radio, letting the team know just what he thought. 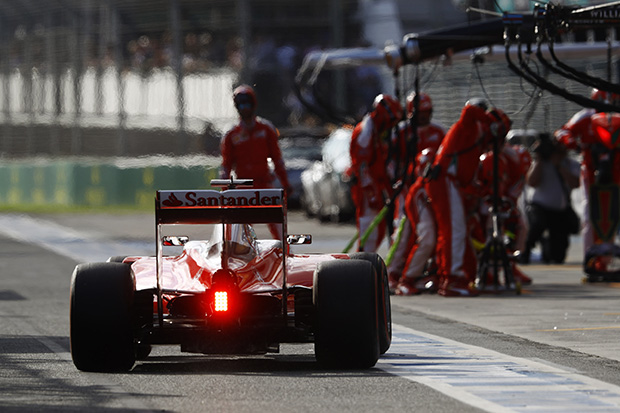 17) As the Toro Rossos pitted out of his way, Hamilton was given a clear track – and became the fastest man on track, cutting into Riccardo’s third place at about 1.5s per lap. Meanwhile, up at the front Vettel’s super-softs were past their best. Ferrari kept him out for a couple of laps longer, to give him a short enough final stint that he could attack hard to make up the pit-time loss. Rosberg had cut into that earlier 3s deficit and was now just 1.4s behind. The Ferrari came in on the 35th lap and had its new softs fitted. It rejoined fourth.

18) Nico’s brake caliper temperature was slowly coming back down but he was now troubled by the left rear tyre. Again, the team couldn’t specifically advise him about what the Pirelli engineer was telling them – that at his rate, it could not possibly get to the end. As the tread wore down, the temperature was dropping, the grip reducing. Nico could feel the loss of grip and backed off as much as he could. Vettel and Hamilton were lapping at a similar pace and, once alerted, Rosberg had to respond to ensure they didn’t reach him before the end. Given the state of his left-rear that was a tricky thing to accomplish and there was a lot of engine mode manipulation necessary.

19) Five laps from the end Sainz locked up his brakes into turn 15, Verstappen refused to back out of it – and they touched. Sainz’s car reared into the air but continued as Verstappen spun. Max got going again, having dropped five seconds, all of which he would claw back in the remaining few laps as Sainz caught up to the Hulkenberg/Bottas train. “It’s ridiculous. We could have finished much higher up today,” fumed Max after crossing the line 10th, still behind his team mate.

20) Rosberg’s winning margin over Hamilton was 8s as another Mercedes 1-2 unfolded. But there’s plenty to suggest the silver cars’ dominance has been significantly reduced. “I was glad to see the Ferraris on the super-soft at the restart,” said the victor. “I wasn’t sure that was going to be the case. But we need to keep an eye out for the red guys.”