The second that Mark Webber, admittedly while stood at a well-lit street corner, accepted a lift in strange circumstances, I knew he would have to pay a price for his action. 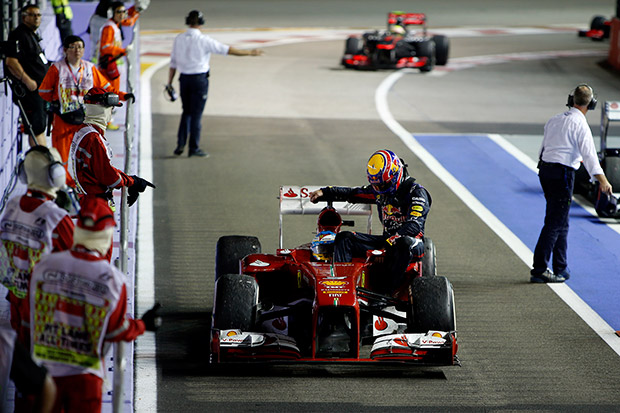 He, however, either never considered it or didn’t care. Daft on both counts.

Unlike the religious nut he had to skirt around at Silverstone in 2003, Webber should have known better. Let’s face it, he is too close to the end of his Formula 1 career to be risking serious injury because of a moment’s inattention when, to all intents and purposes, the ‘Motor Racing is Dangerous’ bit of any given Sunday is done and dusted.

Yes, motor racing is meant to be an escape from everyday life, but it can’t escape it entirely. It has been responding to public mores since the 1903 Paris-Madrid was halted at Bordeaux because of a spate of accidents. Had Aussie Grit been flattened – and certainly he startled Lewis Hamilton – not only would he have been a victim of his own impetuosity, but also the sport would have copped unwelcome flak.

He should, therefore, have held his hands up and taken it on his stubbly chin. Instead he struck out. For him to have a dig at FIA Driver Steward Derek Warwick – aka Jersey Grit – was, at worst, indicative of a guilty conscience and rich at best.

Webber and Warwick: both have walked unharmed and with sturdy resolve from spectacular crashes; and both have damaged themselves when their racing guard was down: a leg-breaking fall from a mountain bike for Webber and an interface with a stationary Transit for Warwick while demonstrating a go-kart at Jersey’s Bouley Bay hill climb. 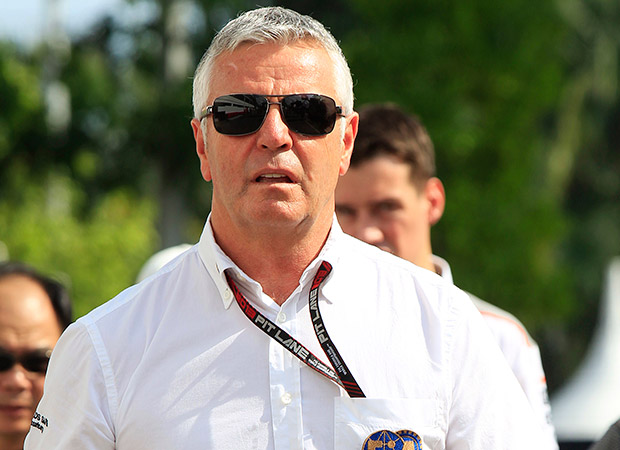 In 10 years’ time, and perhaps with two or three Le Mans 24 Hours victories under his belt, Webber, if he is minded, would be an excellent Driver Steward: tough, straightforward, respected. Until then, and in the cold light of day, if Warwick considers something to be dangerous then I am inclined to believe him.

This tough guy/good guy from Hants has been one of the sport’s straightest shooters since honing his skill and attitude amid the shale bullets of the British short ovals. Stock car racing is rumbustious. The finesse it undoubtedly requires is less apparent because often it is applied via boots with steel toecaps. A man-sized sport in other words.

Yet Warwick was still a teenager when he won the 1973 Superstox World Championship. He’d grown up quickly, learned the hard way and earned his elders’ respect while respecting his elders. This praiseworthy balance, both on and off the track, is something he has maintained right up to and beyond F1.

So, rest assured, it wasn’t what good mates Fernando Alonso and Webber did at Singapore, it was how they did it that caused censure.

Neither Webber’s resultant 10-place grid penalty nor the inability (because of a gentleman’s agreement between the governing body and the drivers) to levy a fine in its place were Warwick’s doing or concern. And if the drivers were disappointed by his unwillingness to argue their case without question, then tough. 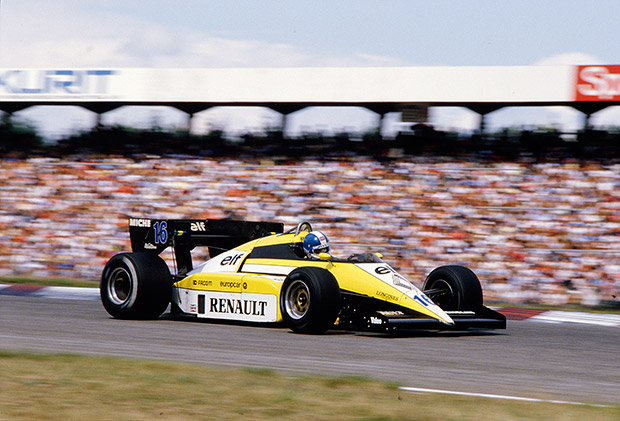 The inclusion of proven racers in this process has given such sporting decisions much-needed heft as the rules have grown to reflect modern life and become increasingly pernickety. That Warwick, too, has experienced ‘a lift back to the pits’ should not open him up to ridicule from the current crop. Rather it means he is in the perfect position to judge. He knows of what he speaks: you never know when it’s coming – even when on full alert.

In 1993, the active suspension of Gerhard Berger’s Ferrari threw a wobbly exiting the pit lane at Estoril and fired the helpless Austrian at right angles across the track and into the barrier. The car that missed him by inches was a Footwork driven by a Mr D. Warwick.

Derek’s long F1 career was at the time two starts from its final full stop, but it all flashed before him. For it to end that way would have been regarded as a misfortune. To be run over by a peer on a slowing-down lap could only be attributable to carelessness.

Rules are rules. The inference of their application in Singapore is more important: Snap out of it, Mark!

That this silly episode should grab the post-race headlines was indicative of what many considered to be a dull race. I do not subscribe to the latter point of view. There was much to admire and to thrill to, particularly as the various strategies unwound. 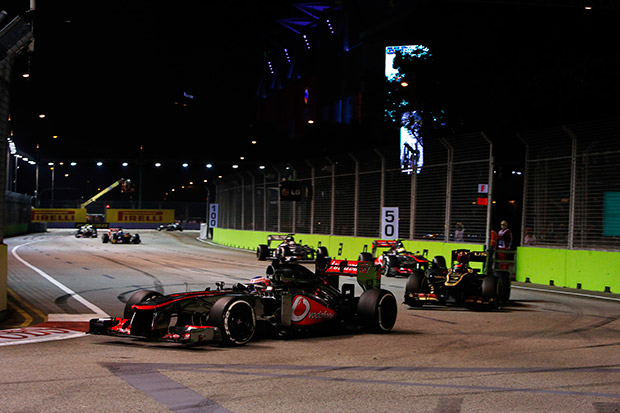 I do understand, however, that it is the lead battle that sets a race’s tone for the unconverted. That there wasn’t one under the floodlights thanks to the hard-earned excellence of ‘Super Seb’ and Red Bull caused many to switch off: the ultimate sanction.

To sit through a ‘nil-nil’ is what gives any sport its context. Those seeking thrill-a-minute, i.e. the progenitors of DRS, will surf the channels come what may. Though they miss out on so much I sometimes envy their blissful ignorance.

But then I strike a lucky seam because I am willing to dig, and the jaywalking and trash-talking recede.

It was while researching Warwick’s shunts/bravery/near misses – taking the start at Jerez after Lotus team-mate Martin Donnelly’s grievous crash; running for the spare after walloping the Parabolica barrier; and sliding up to his neck in the Hockenheim gravel – that I was reminded of Portugal 1993: a forgotten classic.

It had everything. I know, I watched it on YouTube when I should have been writing this…

Alain Prost announced his retirement, had a dig at how he had been treated by the FIA in his comeback year – it had hardly welcomed him with open arms – and promptly secured his fourth world title. 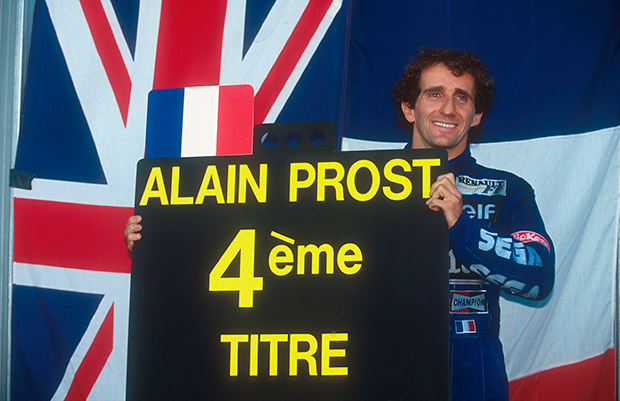 Ayrton Senna, at daggers drawn with Ron Dennis – now, that was a man-sized argument – revealed that he would not be driving for McLaren in 1994 and was promptly outqualified by new team-mate Mika Häkkinen.

Damon Hill, seeking his fourth consecutive victory, secured the second pole position of his career but was forced to start from the back when the Renault V10 in his Williams stalled on the grid. He finished a charging third.

Jean Alesi, in that Ferrari with the Starsky and Hutch flashes, led the early stages after a brilliant start. Häkkinen gave chase – after Senna’s Ford let go – but got carried away by Jean’s turbulent wake and crashed exiting the long right-hander before the main straight. A lesson learned.

And Michael Schumacher, after switching to the spare Benetton and from a two- to a one-stop strategy, scored the second win of his GP career. His defence against Prost, who was aggressive to the end despite only needing to finish second, was rumbustious to say the least yet also brimmed with finesse in its clever manoeuvring of backmarkers. Prost expressed himself okay with it afterwards and saved his stern words for the way in which Häkkinen had pinched him at the start. 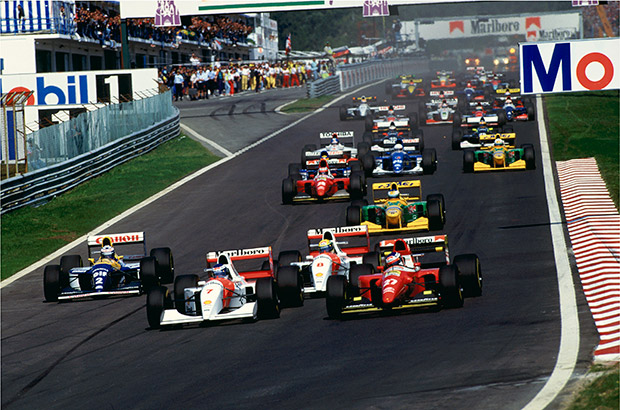 These were the first signs of the changing of the guard: Senna v Prost for Schuey v Mika, via the interregnum of Hill.

There was a penalty, too, a 10-second stop-go for JJ Lehto after he had mistakenly identified Schumacher as Riccardo Patrese, with whom JJ was dicing, and thus baulked the leader for a couple of laps until he realised his error. The ruling was harsh but fair. Quite how the Finn’s Sauber team-mate Karl Wendlinger got away with his one-man war against Ligier rosbifs Martin Brundle and Mark Blundell was harder to fathom.

Twenty years later we are still seeking consistency in such matters. The drivers say they want it, but I am not entirely sure that they do. Certainly, they are too close to the subject. So close that they cannot see the objectivity, which stems from his all-encompassing love of the sport, Warwick so obviously supplies.

Click here to listen to our podcast with Derek Warwick