Though ‘The Boy’ was not yet 25, it was time to man-up. Mike Hawthorn, just six months his senior, already had. 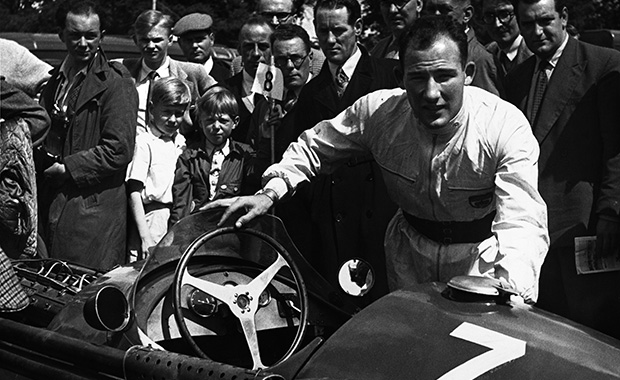 It wasn’t entirely Stirling’s fault. The British constructors in which he invested so much faith – from HWM to ERA via BRM – had failed to mature.

But for that stubbornness and thoughtlessness, it might have been Moss in a Ferrari 500 leading that final charge from Thillois at Reims in 1953.

Now, having been politely turned down by Mercedes-Benz, who advised that he prove his suitability in a privateer Grand Prix car, Moss ruled out a Ferrari – that stubbornness again – and approached Maserati for 1954. 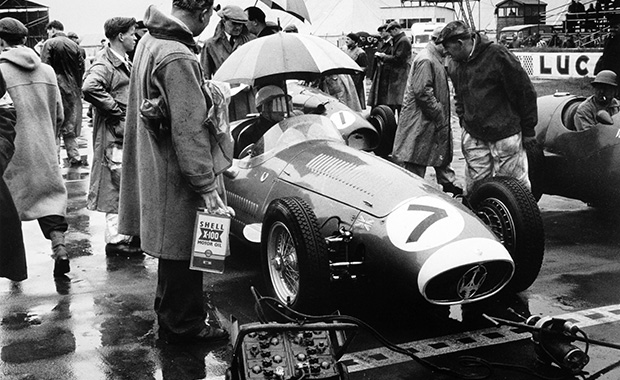 Moss heard of its purchase via the crackly radio-telephone on RMS Queen Elizabeth. He was returning home after scoring a surprise Sebring 12 Hours victory in Briggs Cunningham’s brake-less, clutch-less 1500cc OSCA, co-driven by Bill Lloyd.

Having achieved one dream by racing in ration-free America, an excited Moss could now look forward to achieving another.

But when his no-nonsense chief mechanic Alf Francis arrived in Modena in March, having driven across Europe in the Commer transporter on loan from the Rootes Group, the chassis was bare.

Much chivvying later – Maserati initially baulked at demands for a right-hand throttle and extended cockpit to suit a full arms’ stretch driving style – Moss got behind the wheel of chassis ‘2508’ for 15 fast laps of the Modena test track on May 5.

He revelled in the smooth power delivery and sweet handling on a track made oily by an overfilled tank. 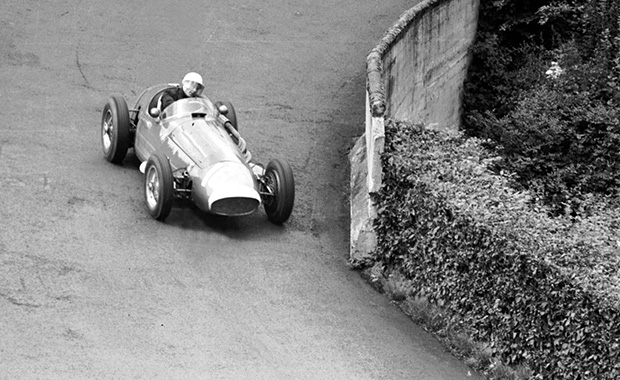 Four days later Moss was in Bordeaux for a 123-lap non-championship GP and pleased to be making his Formula 1 debut away from the British scene, so keenly did he feel the ramped pressure of expectation.

He took matters steadily in his “sickly Adriatic Sea green” machine and qualified seventh, 2.5 seconds slower than the pole-sitting Ferrari 625 of Maurice Trintignant.

Race day dawned damp and Moss struggled on his Dunlops. The alert Francis again sprang into action, had some Pirellis mounted and signaled his charge to pit on lap 47.

On better tyres and in improving conditions, Moss was able to unlap himself and finish fourth, albeit still two laps behind the victorious Ferrari of Froilán González.

As the report in Motor Sport pointed out, Moss “had enjoyed the rare experience, for him, of completing a Grand Prix without mechanical trouble.” 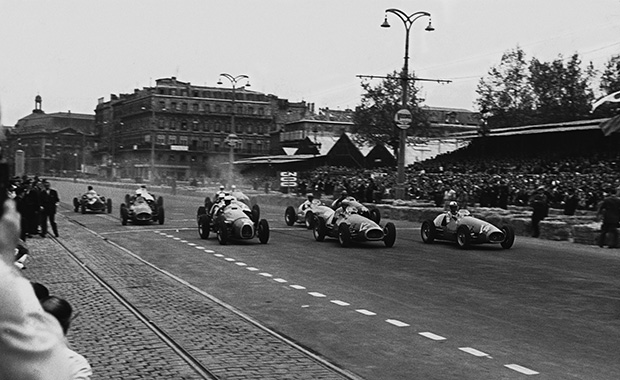 The 250F was a revelation in so many ways.

It was raining the following weekend, too, at Silverstone for the BRDC International Trophy.

Moss qualified joint-second for his heat and finished third behind the new Ferrari 553 ‘Squalo’ of González and Prince Bira’s older Maserati.

‘Gonzo’, despite a last-minute swap to Trintignant’s 625 when the Squalo refused to fire, was again uncatchable in the final, but Moss was looking the likely runner-up until the de Dion tube broke and the Maser weaved to a drunken halt at Club Corner.

Having suffered a jammed starter motor on his Jaguar MkVII and finished third in the saloon car race as a result, Moss cheered himself with a dominant victory in the 500cc Formula 3 race aboard his Francis Beart-tuned Cooper-Norton. 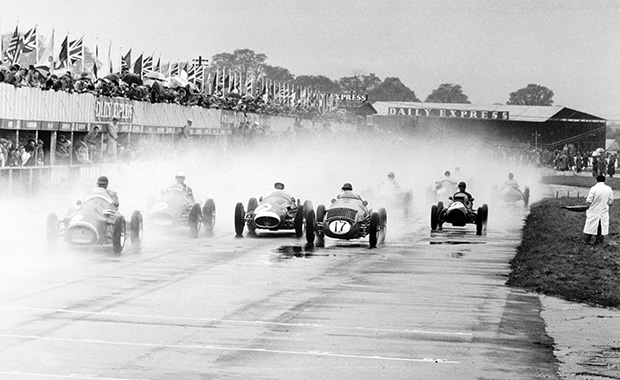 That same combination also won the 500cc race at the Nürburgring’s Eifelrennen – the even younger Stuart Lewis-Evans outpaced Moss for all but the last few hundred yards – while Francis was busy repairing the 250F and rebuilding its engine.

While he was at it – against his better judgement but at Moss’s insistence – Francis fitted a taller final drive for the forthcoming Formule Libre Daily Telegraph Aintree 200.

An overgeared and sheepish Moss was six seconds off the pace in practice at the new three-mile circuit (run anticlockwise on this occasion) and Francis was faced with another 12-hour shift.

Neither man was happy after the first 50-mile heat – Moss finished third behind the Ferraris of Reg Parnell and Peter Collins, who was even younger than Lewis-Evans – but a switch to bigger carburettor chokes and jets, done while Moss was winning another F3 race, worked a treat in the 100-mile final.

While older and supposedly wiser men spun off in damp conditions, Collins and Moss starred. 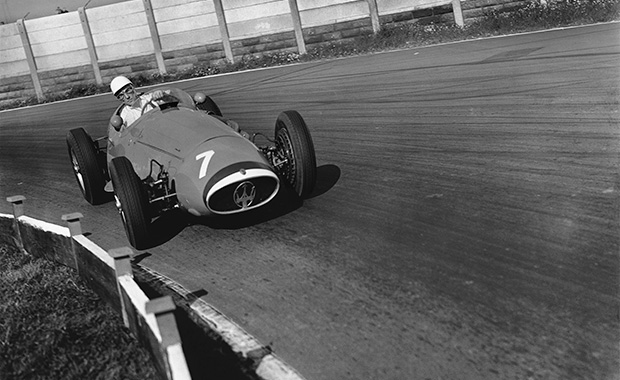 The latter started from the second row and was fourth by lap five. But Collins, driving brilliantly in Tony Vandervell’s much-modified 4.5-litre Ferrari, had made good his escape by the time Moss moved into second place.

Whereupon the track began to dry and Moss began to close. Insufficiently to guarantee victory but by enough to impress: not only had he the skill to make the most of cutting-edge GP equipment but also he possessed the requisite smarts.

He was in control of mind and machine.

Thus ‘The Boy’ became a man even before the leading Ferrari began to misfire, as it had in its heat, and Collins was forced to pit for new plugs.

Moss swept past to victory. 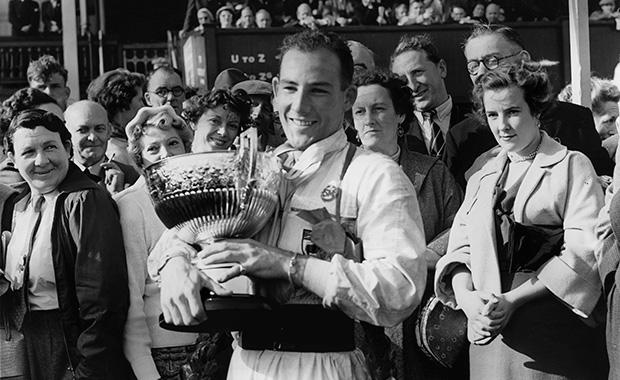 Naturally, there was much ballyhoo, but Francis and fellow mechanic Tony Robinson were too busy packing the Commer for another transcontinental marathon – this time to the Rome GP at Castelfusano – to take notice.

Yes, Moss’s career had turned an important corner – 60 years ago this month – but a long road, some of it necessarily straight and narrow, some of it not, but all of it exciting, lay ahead.