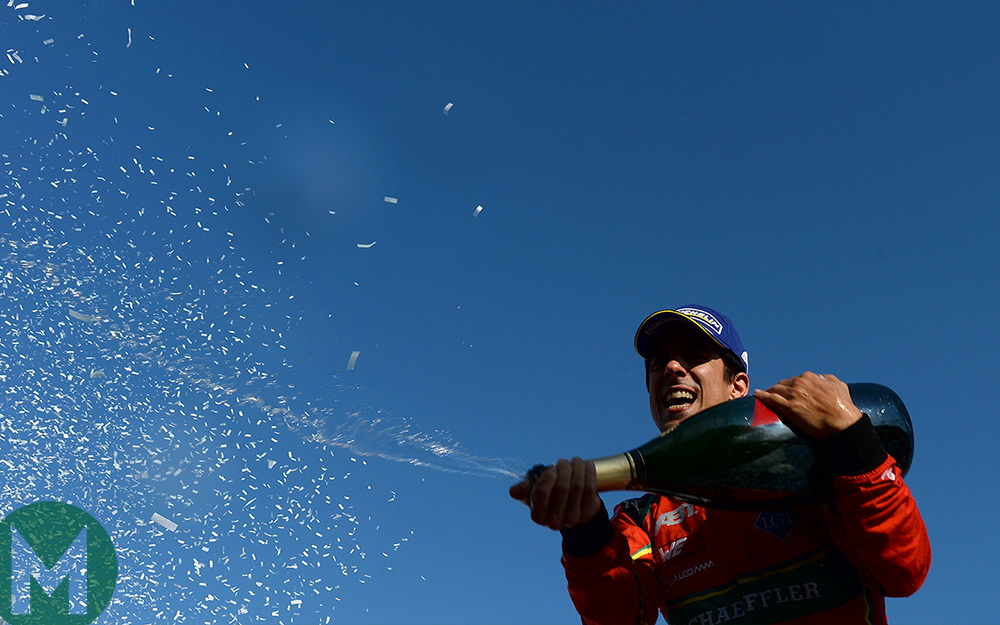 Last October, upon arrival at Hong Kong airport for the inaugural Hong Kong ePrix, a quiet yet very visual revolution announced itself to the motor sport industry.

At the airport, and right through to downtown Hong Kong, there were seemingly dozens of large electric (obviously) billboards announcing the return to international racing of Jaguar – or Panasonic Jaguar Racing, to give the new Formula E team its full moniker.

To the racing world at large this was old news – Jaguar had publicly announced its intentions to race in Formula E almost 12 months earlier – to those high-rise business types in one of the world’s financial and economic heartlands it wasn’t. To them it sounded a coming-of-age warning to the business and sport of racing as a whole.

Jaguar’s arrival was a key landmark in the development of Formula E, it marked the beginning of an eco-system for major OEMs to follow and join the electric revolution.

Eight months later, Mercedes, Audi, BMW and Porsche had indeed followed. It is likely that in another eight months’ time such as Maserati/Chrysler and Nissan will have given notice of their intent to join them in 2019/20, rippling onwards the huge shockwave being sent through motor sport.

So, Formula E in 2016-17 was very different to the previous two seasons. This time it was getting serious and making early naysayers look and sound a bit prehistoric.

The championship counted Hong Kong, Paris (for the second season on the trot), New York and Montréal on its calendar. Races were being added in the hearts of cities where Formula 1 could only fantasise of racing. Those dreams were increasingly becoming electric.

The revolution was barely televised, though: the one flimsy area of the all-electric championship was the TV coverage.

Squirrelled away on Channel 5 in the UK, the season finale in Montréal even got relegated to Spike TV (what’s that?) in deference to a Dirty Dancing theme night! You may need to read that last sentence again.

Rest assured that this area of Formula E is being taken much more seriously for next season and beyond, when manufacturers won’t countenance such niche exposure and poor coverage. 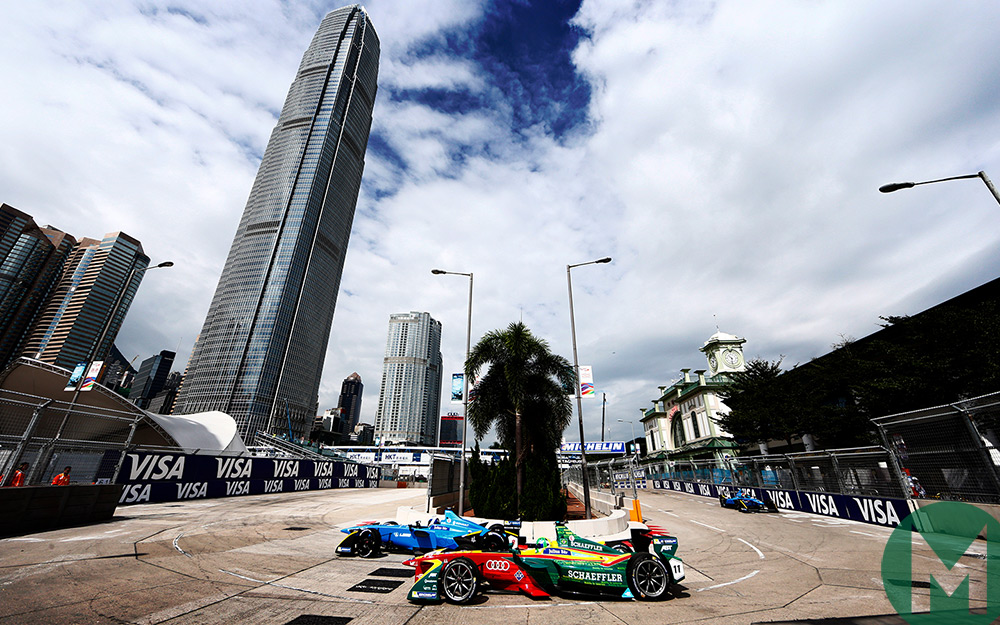 That apart, Formula E seemed to deliver in every which way in 2016-17, and that was certainly true on the track. The title fight, again waged between Lucas Di Grassi and Sébastien Buemi, included a host of astounding sub-plots.

These included initial domination by Buemi, a stealthy fightback from Di Grassi, a controversial missing of two races by the double-booked Buemi, a broken leg for Di Grassi at Stamford Bridge (no, really!) and a tumultuous finale in Montréal where Buemi suffered a spectacular public meltdown.

As championship battles go it had pretty much everything and for the third season on the trot it went down to the wire.

Buemi is likely to be spending the coming summer mulling over and fermenting just how he lost the title after winning 50 per cent of the races. His six successes at Hong Kong, Marrakesh, Buenos Aires, Monaco, Paris and Berlin were his only points scores.

The Renault e.dams team, with which Buemi and his capable wingman Nicolas Prost have raced for since the start of the championship in 2015, were again the class of the field. The powertrain, overseen by industry veteran and Renault Sport Technical boss, Vincent Gaillardot, was evolved with one mission in mind: to retain both the drivers’ and teams’ titles.

“We knew that there would be teams looking at our technical set-up from season two and copying the elements of it,” said Gaillardot. “So we realised that from an early stage we had to work on the package and make it a complete evolution. We also knew that understanding the new Michelins was crucial because they would change the vehicle dynamic and the way we went racing.”

This last point of Gaillardot’s became a strong narrative thread through the whole season. Michelin provided new lighter rubber for 2016/17 and initially it was not given much of a thought.

It soon became clear that the nuances of the new product affected the handling of the super-sensitive Formula E cars more than first believed.

The tyre was more efficient and went further in terms of durability but the grip was less than the previous products. It also differed enormously on how it heated up and reacted on different surfaces, which in Formula E varies from street to street.

The cream still rose to the top, though, and for Lucas Di Grassi and his Abt Schaeffler Audi Sport team it was a hard won title.

The cerebral Brazilian bided his time while Buemi soaked himself and his team in champagne by cleaning up in the first half of the season. The turning point undoubtedly came at the Autodromo Hermanos Rodríguez in April, when Di Grassi laid last season’s ghost of being disqualified for a weight infringement to rest.

On a remarkable afternoon Di Grassi somehow fought back from being last on two separate occasions to score an unlikely win with several strategic gambles.

It was just the fillip he and his team needed, and despite a wretched Paris ePrix in which the Brazilian collided with Antonio Felix Da Costa, Di Grassi knew that with Buemi missing the two New York City ePrix races, his chance would come.

He took it with grateful hands, although he made hard work of it in the Big Apple by scoring a relatively meek fourth and fifth place. This meant he was heading to the final double header 10-points adrift of the returning Buemi.

It was a weekend of high drama in Montréal, but all of it centred around the Swiss Renault driver.

He seemed to arrive at Canada in an agitated state. A hefty accident in free practice triggered a series of events that ultimately gave Di Grassi an open goal. The Brazilian converted skilfully and became the third different Formula E champion in as many seasons.

Admittedly there are elements of fortune, including Buemi’s two missed races, but Di Grassi took full advantage in a car far inferior to the Renault.

Felix Rosenqvist of Mahindra Racing showed how foolish many F1 teams had been to ignore his talents, the Swede starred throughout the year with a win, three poles and four other podium finishes to take a brilliant third in the standings.

DS Virgin Racing’s Sam Bird took an accomplished double at New York, while Jean-Éric Vergne took victory in the final race of the year in Montréal. They were the only other winners during the year, but Nick Heidfeld, Jose-Maria Lopez and Oliver Turvey all caught the eye with their individual performances.

And Jaguar? Well it made progress in what was a self-acknowledged learning season. Its alliance with Williams Advanced Engineering needed time to develop and greater things are expected of season four, which begins in Hong Kong on the first weekend of December. In Mitch Evans the team has an undoubted star, one that showed why Mark Webber had put a lot of faith in his protégé over the years.

From the genesis moment of the new Formula E last October, an even greater buzz will crackle in season four as Audi and BMW up their involvement with Abt and Andretti respectively.

Mix in new races at the heart of Rome and São Paulo and the progress of Formula E looks very healthy indeed.

There will also be the prospect of the new-for-season-five Formula E car, which will have its first test this October in readiness for a 2018-19 debut. Expect the look of the FIA spearheaded design to add yet another wow factor to motor sport’s most seismic revolution in decades.