The boys are back in town and Bentley is back on track. 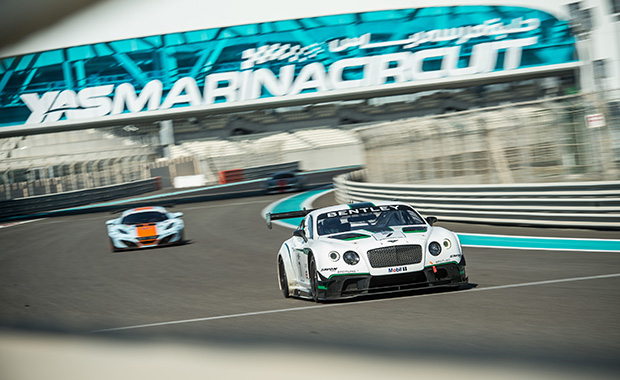 The B word is one everyone’s lips in downtown Abu Dhabi where the Gulf 12 Hours gets underway today at the Yas Marina circuit.

Bentley has been keen to stress that this is a ‘test race’ for its new GT3 contender, a competition version of the Continental GT. Working with Malcolm Wilson‘s M-Sport team, the Bentley Boys, led by 2003 Le Mans winner Guy Smith, have done more than 8000km of testing in preparation for today. And, from what we have seen thus far, the signs are good.

Yesterday Steven Kane put the new car on the second row of the grid, just eight tenths off the pole time, and he will start today’s race before handing over to team-mates Smith and Andy Meyrick. Oddly, the Gulf 12 Hours is split into two six-hour races with an interval of two hours during which teams may work on the cars. So, by midnight tonight, Bentley will have a clearer picture of where it stands ahead of next year’s Blancpain Endurance series. 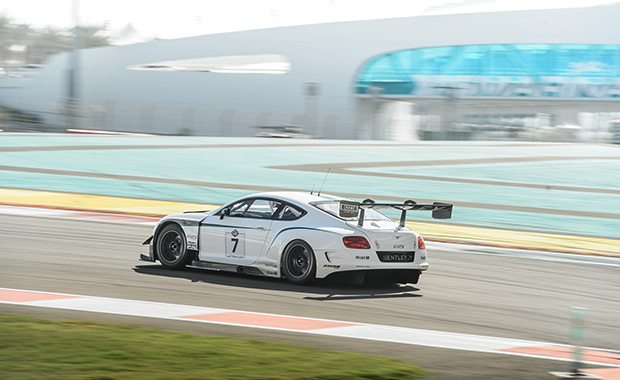 “It really is a test race for us, yes, we need to check we are, but of course we are racers,” says Brian Gush, Director of Motorsport at Bentley, “so for sure we want a good result and we’re pretty pleased with fourth on the grid. Our focus is on the 2014 Blancpain series so we need to gather as much data as we can this weekend – you can test and test but we still don’t know the car as well as we’d like to.

“The car has responded pretty much as we expected except for the brakes – this place is very hard on the brakes – so we’ve done a lot of work on the balance, and that’s what we’re here for. We’ve never run the car in heat like this either – 27 degrees in qualifying – but so far we’ve had no problems with cooling and the drivers are saying good things about the car.

“So yes, we’re on target, but it’s a new team, we’ll be doing our first pitstops and driver changes, and the other GT3 teams obviously have a lot more experience.”

Guy Smith back for Bentley

For Guy Smith everything is new – except the Bentley badges on his overalls. “My first time at Yas Marina, my first race in a GT3 car, so yes, this is a new challenge for me and I like that,” he tells me ahead of the race. “It feels great to be a Bentley Boy again, the car feels good and we’re working well together as a team. But this race is all about learning, are we doing it right, can we do it better? It’s our first time out in the heat of battle and that’s a very different thing from all the testing. 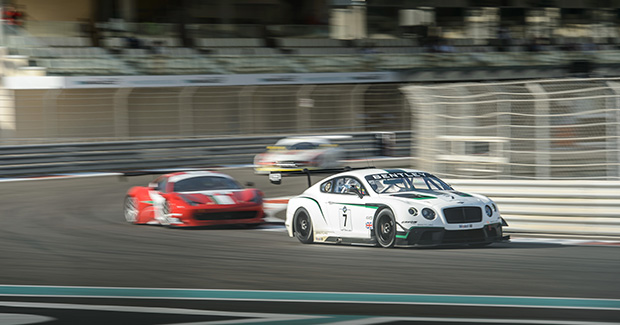 “Today we can properly assess where we are in relation to the Ferraris, the McLarens, and this is how we went about it at Le Mans, just working up to where we need to be. I’d like a bit more traction in the slow corners but the car is already pretty damn good – we just need to be realistic and see where we are after the first six hours.”

Everybody is talking about it, the car looks like it means business, and this will do no harm at all to Bentley’s business in the Gulf. It may not win today but you can bet a few Continental GT test drives will be booked in for next Monday morning. The boys are back, make no mistake. To see a Bentley back out in anger has been exciting, the white and green number seven fighting for position with Ferrari as I write. More news later as the race heads into the heat of mid-morning in the desert. A long way to go.

Bentley is not only back, it is back in contention from the word go.

Under blue skies and a blazing sun at Yas Marina the new GT3 Continental came through the first six hours of the Gulf 12 Hours with encouraging speed and reliability. Third place on its first outing was described as ‘very satisfactory’ by  those who have been developing the car for the last five months.

The Blancpain regulars will be keeping an eye on the big green and white machine ahead of the season. 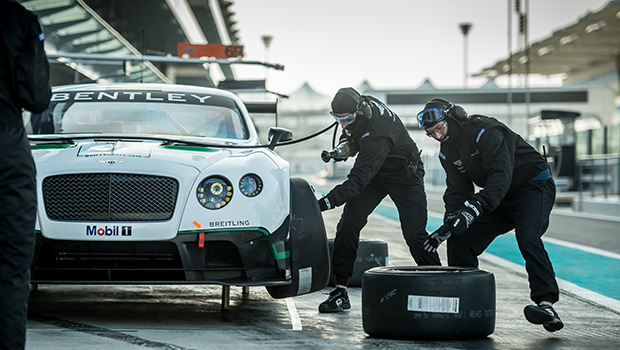 The race here is not completely representative of what Bentley will face in the New Year, of course, but the GT3 has been superbly reliable, and driveable, in the heat of an Abu Dhabi afternoon. All three drivers have spoken enthusiastically about the brakes, the power and the high-speed handling. Before the next race in two hours time M-Sport can work on the car, make any changes in search of extra performance, and then they head into a further six hours in cooler temperatures.

Andy Meyrick, who has had some close racing with the leading Mercedes SLS and Ferrari 458, was buoyant after his stints in the car. “We have good performance in so many areas,” he smiled, ” it’s not just the braking, or the torque of the V8, it’s the whole package. Sure, the night race may be different, but right now the car is good to drive, it’s hot in the cabin but that’s common in a GT car. I have driven the McLaren and so I have a comparison – I’d say we are on target for what we wanted to achieve here. The crucial thing is to get as much data as we can to take us forward into next season.”

Away from the inevitable spotlight on M-Sport and Bentley, the first race was won by the AF Corse Ferrari 458 of Cioci/Wyatt/Rugolo, with Schneider/Bleekemolen/Al Qubaisi second in Team Abu Dhabi’s Mercedes SLS. Kane, Meyrick and Smith followed them home a lap down after an extra stop for fuel, their target being to finish cleanly, not to go for the outright win. 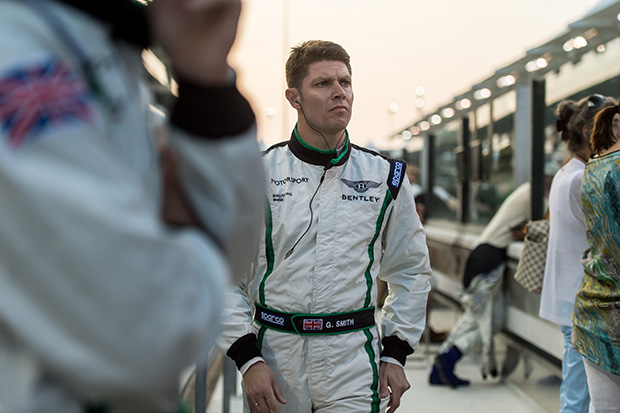 Gush was quietly pleased with progress at the end of the first six hour race. ” It was largely as we expected from the test programme and the race simulations and yes, we are pleased with the way the car performed. There is some room for improvement in fuel consumption, and we had problems with tyre pressures early in the race, but overall I am satisfied.

“We raced hard, you can’t prevent the drivers from going for the best possible result, but for us it was a test race and we will learn a lot from the data. Tonight will be cooler which will give us a little more power, but it also adds to the drag, so all in all I am not expecting any surprises.”

So far so good, then, and a warning shot across the bows of Merc and Ferrari. The second six hour battle begins this evening and at ends at midnight. Shame there are no spectators to enjoy the glowing discs and exhausts of the GT3 cars as they head into the sunset. There was a bigger crowd to welcome Santa Claus to our hotel last night. But none of this worries Bentley as they continue to go about their business in typically methodical fashion in front of potential customers and rival teams who now have some fresh opposition.