Taken from the July 1998 issue of Motor Sport

One evening, several years ago, and over a degustivo or two, Jenks was reminiscing about the Mille Miglia. “I’ve often thought,” he said, “what fun it would have been to do it in a Porsche 917.”

Driven by whom? I asked. Rodríguez? Siffert? “No, no,” he replied. “Given a choice, I’d have chosen Brian Redman. He was as every bit as quick as they were, and far more intelligent. With Brian, there’d have been much more chance of getting to the finish…” 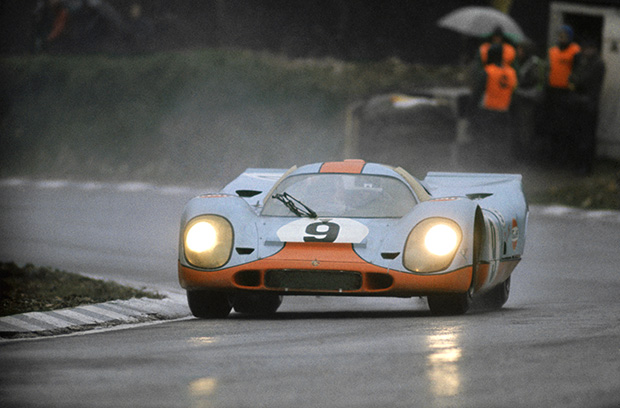 There is, I think, a strong case to be made for proposing Brian Herman Thomas Redman as the most underrated racing driver this sport has known. True, he drove in only a dozen Grands Prix, but then it was always important to Brian that racing be fun, as well as provide him with a living, and even back in 1974, when last he drove a Formula 1 car, he thought the paddock a touch precious.

It wasn’t that Redman lacked the ability to hack it in Formula 1. On the contrary, he finished third in his first Grand Prix, at Jarama in 1968, and in the rains of Monaco in 1972, subbing for Peter Revson at McLaren, he was fifth, in the process neatly trouncing team leader Denny Hulme.

Although Redman made his name primarily as a sports car driver, his prowess in single-seaters was amply displayed in Formula 5000, notably in America, where he defeated arch rival Mario Andretti more often than not. “A good professional,” is probably how he would describe himself; he was much more than that.

He has lived in Florida these 18 years now, but his Lancastrian accent is happily intact, and complements a wonderfully dry wit. Among his interests these days is an F3000 team, which is what brought him to Imola in April. While there, he stopped by for lunch at the Ford motorhome, and thus provided us with the high light of our weekend. 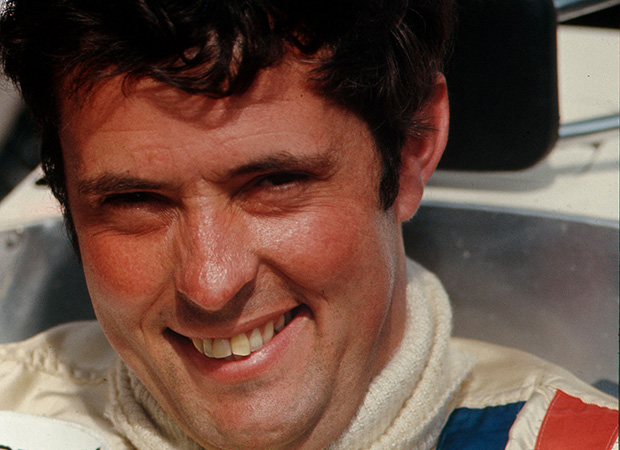 Now 61, Brian looks remarkably well on it, and the once cruel scars on his face – legacy of an accident at the 1971 Targa Florio – have faded to nothing, absorbed into a deep tan. He talked about the Porsche 908/3 in which he crashed that day.

“I first saw the car at Weissach, at Porsche’s Christmas party. This thing was in a corner, under a sheet. ‘Herr Redman, you would like to look at the new 908/3?’ I said yes, I would, and I took the sheet off. Then I took the front bodywork off, and sat in the car – and saw that my feet were sticking out in front of the front wheels. I got out, and Helmut Flegl said, ‘So, Herr Redman, so what do you think of the 908/3?’ I said, it looks like a bloody good car. For Douglas Bader.’

“Before the start of the Targa, Hegl advised me that if I was going to have a shunt, I should have it on the left side of the car because the fuel tank was on the right… Seppi [Siffert] had crashed it in practice, and although they repaired it, the steering broke on the first lap. I hit a wall. On the right, of course.

“I was on fire from head to foot, and couldn’t see a thing. I somehow got out of the car, and ran across the road, but it was 45 minutes before the helicopter came. Then they couldn’t find anywhere to land and then they couldn’t find me… Finally they took me to the wrong hospital, and nobody knew where I was. I was there for 12 hours, without being able to talk to anybody and without being able to see. Not what you’d call a pleasant experience.” 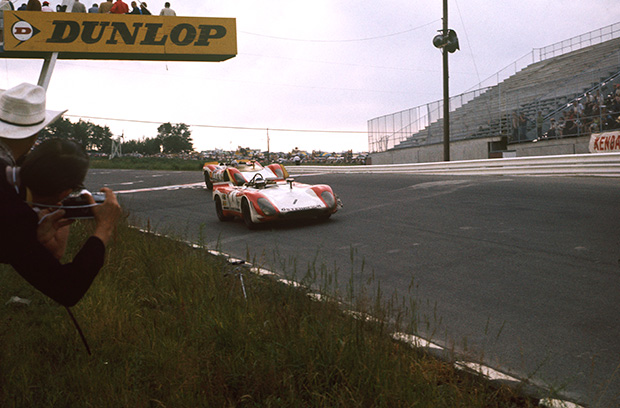 Redman first came to national prominence in 1965, winning endlessly in a lightweight E-type, entered by Red Rose Motors of Chester, which was owned by Charles Bridges. The following year Bridges bought a new Lola T70 for Brian to race, which he did with distinction, and in 1967 another member of the family took him into single-seaters.

“What a family that was. When Charles got out of racing, at the end of 1966, his brother David says to me, ‘D’you want to drive Formula Two, spud?’ – he always called me ‘spud’, for some reason. Yes, I said, what’s the deal? He says, ‘I’ll give you thirty pound a week, guaranteed for a year.’ Right, I said.

“He never came to a single race. We’d be away for a month, racing all over Europe, and we’d get back. He’d be sitting there, 10.00 in the morning, having a glass of whisky. ‘Hello, spud. Where’ve you been?’ ‘Well, I’ve been to Barcelona, and the Eifel race at the Nürburgring, and so on.’ ‘Eeh, that were a grand trip. How did you do?’ I said, ‘Well, we were fourth here, and sixth there…’ ‘Eeh, well, that’s alright, then. Where are you going next?’ Very casual it was, really.”

1966 took Redman to Spa-Francorchamps for the first time, there to share a Ford GT40 with Peter Sutcliffe in the 1000Kms. “Red Rose Motors paid for me to drive with Peter. You know how much? Sixty pounds.” 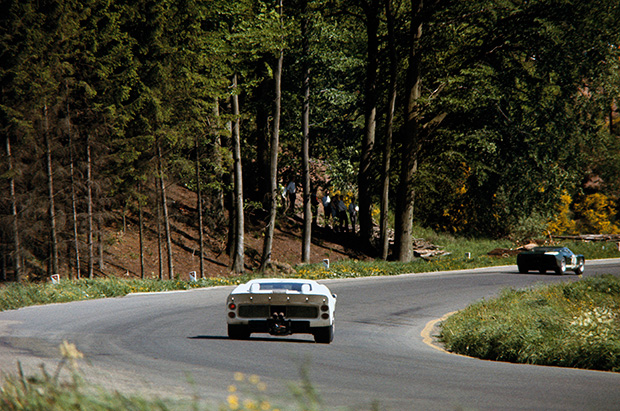 Twelve months on and now a member of John Wyer’s legendary JW Automotive squad, Redman won the Spa 1000Kms in a GT40 with Jacky Ickx as his partner, but when he returned, a fortnight later, to drive a Cooper T86 in the Belgian Grand Prix, a horrifying accident awaited. At Les Combes, the left-hander at the top of the hill after Eau Rouge, his car’s front suspension broke.

“I went over the Armco, and as I did so my right arm was trapped between the car and the barrier. As it turned out, I was very lucky not to lose it. Big one, that. When the car landed, it hit a Vauxhall Cresta that someone had thoughtfully parked there. I suppose he probably thought it was out of reach…”

For all that, Brian adored the ‘old’ Spa circuit. “I thought it was the most difficult circuit, because mentally it was so hard, simply because the corners were so fast. I derived more satisfaction from a good race there than anywhere else. And generally it was a lucky circuit for me: I think I won five times there.”

Years later, the accident at Les Combes was to pay him a dividend of a kind. In the 1972 Spa 1000Kms, Redman was leading in one of the factory Ferrari 312PBs, but Ronnie Peterson’s similar car was closing. “After my shunt at Les Combes, I always took an odd line there, went in early, to give myself a little more room. 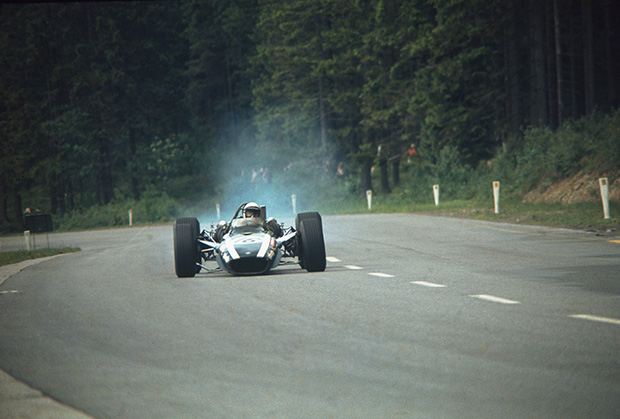 The start of the accident: the suspension on Redman’s Cooper collapses at Les Combes

I saw all this activity, which always means an accident round the corner or something, and I backed off and just got round. It was raining at that part of the circuit, and the activity was people putting up their umbrellas. And Ronnie never made it – he went right round the corner on the barrier. We won.”

In my mind, though, Redman is synonymous more with Porsche than any other marque, and doubtless his remarkable lack of ego was as much appreciated there as it was elsewhere. “When I first drove for them, back in 1969, they were running five 908s, and 10 drivers. And after the first race, the Daytona 24 Hours, they asked me if I wanted to be the number one in my own car, or drive with Jo Siffert. I knew that in going with Seppi I’d be the number two, but I thought we’d win more races that way, so it didn’t bother me.”

He got along famously with the mercurial Siffert, but admits that the partnership was not entirely without its frustrations. “Seppi only had one speed – flat out all the time. We had accumulated a four-lap lead at Le Mans in 1970, and when he missed a gear, right in front of the pits… that was mildly distressing.

“The 917 evolved into a very good car, but at first it was terrifying. Very early on, I got a call from Porsche to come and test it, and I thought, ‘Hmm, they’ve got 10 drivers in the team – why do they want me?’ So I said I had some very important business, but I’d see if I could put it off, and I’d call them back in an hour. I rang Siffert: ‘Seppi, have you tested out the 917 yet?’ ‘No, no, Brian. Not me. We let the others find out what breaks first…’ 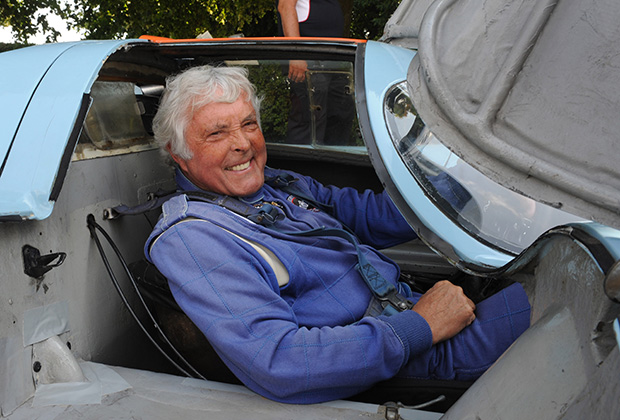 “I drove one in practice at Le Mans in ‘69, and it was the fastest I ever went there – 238mph. But the thing was all over the road; going down the Mulsanne Straight you were constantly having to correct the steering, and you just hoped that when you arrived at the kink you were on the right side of the road… If you weren’t, you had to brake!

“The spaceframe of the original 917 was pressurised, gas-filled, so that if the gauge lost more than so much pressure, you knew you had a crack. When that happened, they’d go around all the joints with a cigarette lighter!” Redman rocks with laughter at the memory. “Times have changed a bit, haven’t they?”