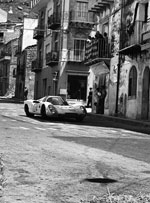 The Targa Florio: a race that conjures vivid images of big, hairy sports cars on claustrophobic, winding roads; of large crowds of maniacal Sicilians, hanging off stone walls and sun-scorched hillsides, within touching distance of their beloved red machines from Ferrari and Alfa Romeo; of rustic villages through which the true heroes refuse to lift, flashing past the peeling walls of houses daubed with graffiti hailing The Man – Viva Vaccarella!

How exotic, how charismatic – how out of reach. It’s all so long ago now. The last great Targa took place in 1973, and it had gone completely by the end of the decade. Sure, historic events try to capture its spirit, but it can never be the same. It’s history. But does its legend linger still in the rugged hills of the Madonie? I’d heard the locals have not forgotten, but how many signs of the epic battles, how many echoes, still survive? I wanted to find out.

To trace the roads of the Targa was a thrill, an ambition to be savoured. Then to do it at the wheel of a car as spectacular as the Ferrari 458 Italia… well, what a juxtaposition between the brute force of the past and the controlled power of the present. Such an occasion deserved something more than a humble Fiat hire car.

The story within the pages of the December issue of Motor Sport has a single purpose: to inspire our readers, and perhaps tempt a few to make the trip themselves. I’d recommend it: an Easyjet flight to Palermo, an hour’s drive east and follow the signs to Cerda. The island is beautiful, the hotels are pleasant and the beaches are sandy – so even the family would enjoy it. Go on. Check it out for next summer.

And if you don’t believe me, perhaps you’ll listen to Vic Elford. His love of Sicily was probably consummated during that incredible comeback drive to victory in 1968. Whatever, it endures to this day. Having provided me with the perfect briefing for my trip, he then offered to write his memories of how to conquer the great road race. You’ll find he’s pretty handy behind a keyboard as well as the wheel of a Porsche 907 – we’ve hardly changed a word of the fascinating article he submitted.

Elsewhere in the issue, Nigel Roebuck brings us a rarity: a one-on-one interview with modern-day Ferrari ace Fernando Alonso. The new World Championship leader hasn’t exactly enjoyed a happy relationship with the British press since his tricky season with McLaren in 2007. But as we’d recently interviewed his good friend Robert Kubica and he enjoys reading the magazine… no problem! Our timing to run the interview now, in the wake of his Korean GP victory, couldn’t be better. A happy coincidence for lucky magazine editors…

A Ferrari thread runs through ‘Lunch with’ this month, too, as Simon Taylor catches up with 1980s F1 ace Stefan Johansson. Then we switch from Maranello to Milan for Andrew Frankel’s very special multi-car Alfa Romeo test. One hundred years of racing history in one day? Not really possible, but the five cars he had lined up at the Balocco test track certainly got to the heart of the matter.

Andrew also gives a definitive verdict on the 458 Italia. Now, I’m no road tester, so I was glad to leave that bit to him. All I’ll say is that I found it more than satisfying! What a car – and what a road to drive it on.

The December issue is on sale Friday 29 October.