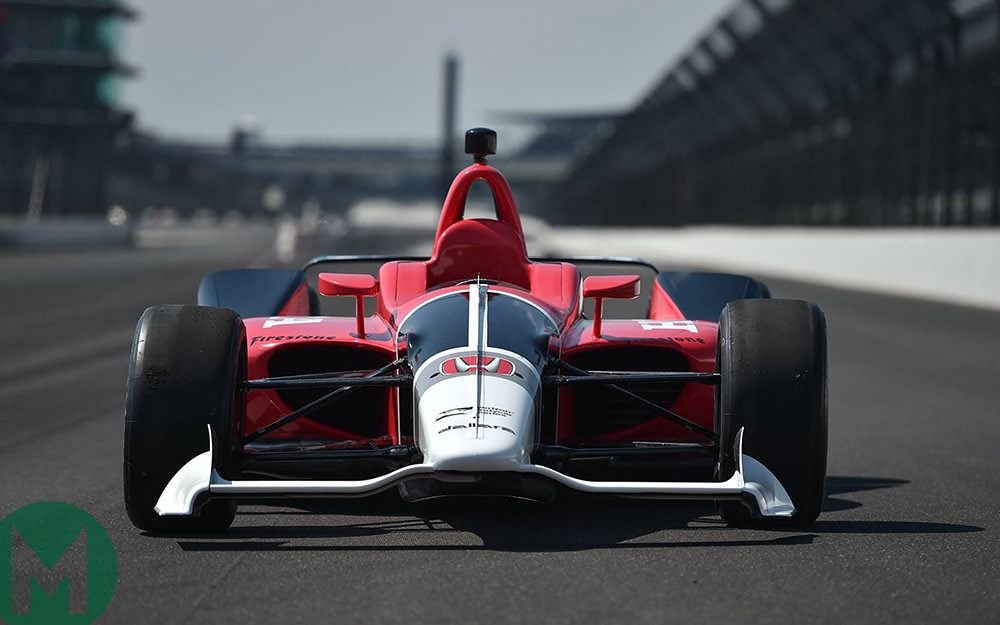 IndyCar has pulled the wraps off its new look for 2018, and as mid-cycle refreshes go, this one is about as radical as you can get.

Look closely underneath slinky new bodywork, which takes styling cues from the evocative Indycars from the 1980s and ‘90s, and you’ll find the same basic Dallara IR-12 chassis that has provided the foundation of IndyCar Series competition since 2012. The first iteration of the car (dubbed DW12 in honour of test/development driver Dan Wheldon) featured spec bodywork designed by Dallara, and since 2014 engine manufacturers Chevrolet and Honda have been allowed to produce their own complicated ‘aero kits’. These comprised bespoke wings and other body parts that were intended to provide visual differentiation between the two manufacturers’ cars.

The three-year aero-kit era proved to be a costly dead end, with Chevrolet generally dominating the competition despite Honda being granted special dispensation to try and catch up. IndyCar is now returning to a single-spec body in an attempt to cut costs and bring back parity, and at the same time improve safety and create more fan appeal.

Given the IR-12’s reputation of being a bit of an ugly duckling, whether in DW12 trim or with Chevy or Honda aero add-ons, the designers have done a stunning job of creating a sleek, modern-looking car with the new bodywork.

Overall downforce has been reduced by around 20 per cent, and thanks to driver input a greater emphasis has been placed on developing downforce from a redesigned floor rather than external wings and flips. Weight distribution has also been shifted toward the front of the car.

Larger, higher sidepods have been moved forward, radiators relocated, and additional anti-intrusion protection has been added to the cockpit sides. These are all safety gains derived from information gleaned from accidents in the last few years that injured James Hinchcliffe and Sebastien Bourdais, and also from Justin Wilson’s fatal crash in 2015.

The rear bumpers that were a controversial design element of the IR-12 from the start have been eliminated. The other major visual change is the move from a high air intake behind the roll hoop to a low engine cover reminiscent of CART-era Indy cars.

“This has been a year and a half in the making,” according to the man charged with plotting the IndyCar Series’ future direction, IndyCar president of competition and operations Jay Frye. “The process has finally come to the point where we can get the car on the track, so we’re quite excited about that.

“Over the last few months we kept putting out some different things to get reactions from the fans to see what they thought of the project. It helped us a lot because it made us feel like we were certainly going in the right direction, which was great.

“We took what we thought the car should look like, and that’s where we talked about reverse engineering the car to aesthetically have the historical feel but yet have a very forward-looking car. We think we’ve done that.”

Montoya and Servia will give the road-course bodywork its debut at Mid-Ohio on August 1, with additional tests planned for Iowa Speedway (August 10) and the Sebring short course (September 26).

Chevrolet and Honda will then be allowed four test days, running two cars using the drivers, teams and venues of their choice. Teams will begin receiving the new 2018 update kits in November, with testing to commence in January.

The test drivers are eager to get to work. “You never know what the reaction is going to be to a new car,” commented Servia, “but the pictures I posted on social media got more ‘likes’ than any other picture I’ve posted this year.

“It’s good to see that the fans are happy and I think it looks hot. When you’re not changing the tub, it’s harder because that is the core of the car. But they have been very creative and were able to change the looks and improve the safety.

“On the simulator the car felt very similar, maybe even a little faster in race configuration,” he added. “It felt really good. I’ve been told that with the engine cover being lower, the car is more efficient and the floor is more efficient so we should be able to follow cars closer a little better.”

Montoya, who will likely lead Team Penske’s Acura-branded IMSA sports car effort in 2018 while also contesting the Indianapolis 500, is also excited about the Indycar of the future.

“I think getting rid of the rear pods is a huge plus for all of the drivers,” he said. “None of us were a huge fan of those, to be honest. Going back to a single body for both manufacturers is exciting because it’s going to bring the racing closer and for the engine manufacturers it’s a big plus because without the aero kit, when you talk about Chevrolet or Honda, it’s all about who’s making the power.

From Servia’s perspective, perhaps the biggest change in recent years is IndyCar’s willingness to listen to all of its constituents and its attempt to provide stability for competitors with a five-year plan of operation.

“IndyCar has been listening to the drivers a little more, I would say, which is nice because not only are we the ones who put our lives at risk, but we’ve been doing it for 20 years, driving all different cars.

“Whoever is ruling (CART, Champ Car, IndyCar etc.) is deciding what we drive, and they truly don’t have an understanding like we do of what works and what doesn’t.

“They’ve been listening to us a little bit more than in the past and I hope it shows,” he added. “I’m very honoured they chose Juan and me and hopefully we can help a little bit in having a better product.”

For IndyCar’s Frye, who boasts a long and varied career in motor sport that includes a stint as a NASCAR team owner, seeing the 2018 Indycar reach the on-track testing phase was an important and emotional occasion.

“There are always bugs in a first test and this is more of a sign-off,” he said. “Somebody’s driving it and here we go. This is what matters. It’s been a collective effort and the teams are all involved in our five-year plan going forward. It’s very transparent; everybody understands what we’re doing, everybody understands where we’re going and what it’s going to cost.

“It was exciting to be the conduit, I guess, to put it all together. It’s been a rewarding project and today is a great day.”