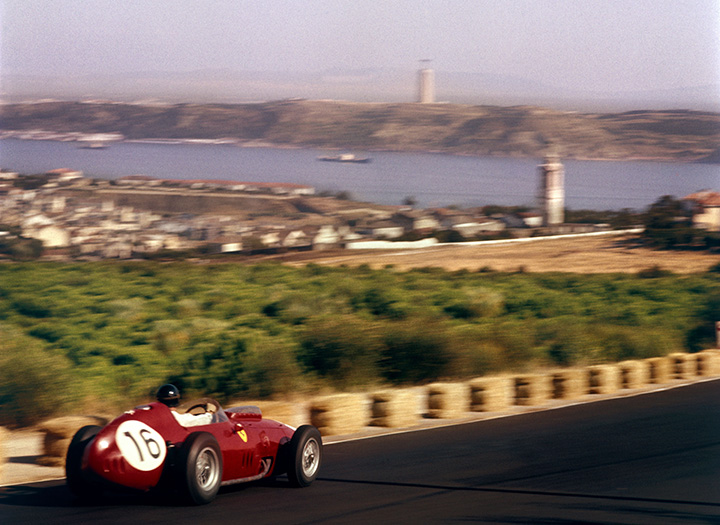 There’s no doubt in my mind that Dan Gurney is America’s greatest racing driver. Dan’s career is one of the few that rivals Mario Andretti’s for diversity and achievement, while his remarkable second career spanning more than 30 years as a team owner and innovative car builder elevates him to a unique category.

As a driver, Dan was as versatile as they come – racing successfully in Formula 1, sports cars, Can-Am, Indycar, NASCAR, Trans-Am and almost anything in between. About the only thing Gurney didn’t do as a driver was dirt track racing in midget or sprint cars and that was largely because he’s so tall he couldn’t fit in them. 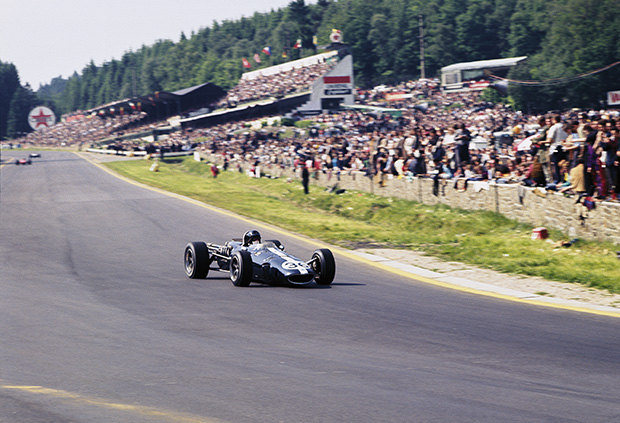 It can strongly be argued that Dan was the fastest American Grand Prix driver we’ve ever seen. He started from the front row 22 times in 86 world championship starts. In a Brabham at Spa-Francorchamps in 1964 he famously sat on pole, set a new lap record in the race and would have won had he not run out of fuel on the penultimate lap. At the Nürburgring during the 1967 German GP he set a new lap record and was leading the race by almost a minute when a driveshaft broke.

Then of course there’s the Le Mans victory with AJ Foyt in a Ford in ’67 as well as many great showings in the original unlimited Can-Am series. Gurney was the only man to win a Can-Am race for Ford, driving his own AAR Lola T70 to win at Bridgehampton in 1966. He also won at Mosport in 1970, pulling together the McLaren team after the tragic death of Bruce McLaren a month prior.

He dominated the NASCAR races at the old Riverside Raceway, his home track. Dan was renowned as the ‘King of Riverside’ and he added to his reputation by winning the January 500-mile NASCAR race five times over seven years between 1963 and ’68, four of them with the Wood Brothers. Despite having David Pearson, Cale Yarborough and AJ Foyt driving for them, they say that Gurney was the best driver they ever had. 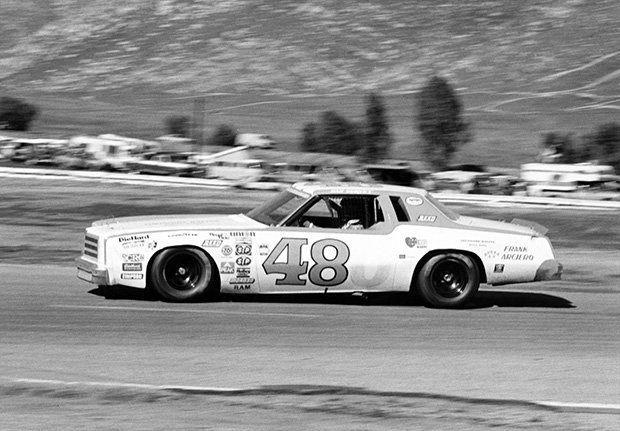 That represents a brief synopsis of Gurney’s driving career. He was a true all-rounder like few others in the history of the sport.

But then there’s Dan’s highly successful second career as a team owner and car builder. No other top American driver has enjoyed anything comparable.

Over a 34-year stretch running from 1966-’99, All American Racers built and raced winning cars for many categories – F1, Indycar, Can-Am, Trans-Am and IMSA – starting with the beautiful and thoroughly competitive 1966 and ‘67 F1 and USAC Eagles. Over four decades AAR earned a deeply deserved reputation for producing some of the most beautifully engineered and constructed racing cars in history.

AAR’s record during that time includes 50 Indy car wins in USAC and CART; two in F1; one each in the Can-Am and Trans-Am; four in IMSA’s GTU category; six in GTO; and twenty-three in GTP. AAR’s Toyotas won the IMSA GTU championship in 1985 and the GTO title in ‘87 while the spectacular Eagle-Toyota GTP cars won 17 straight races – 23 in total – and successive IMSA championships in 1992 and ‘93. 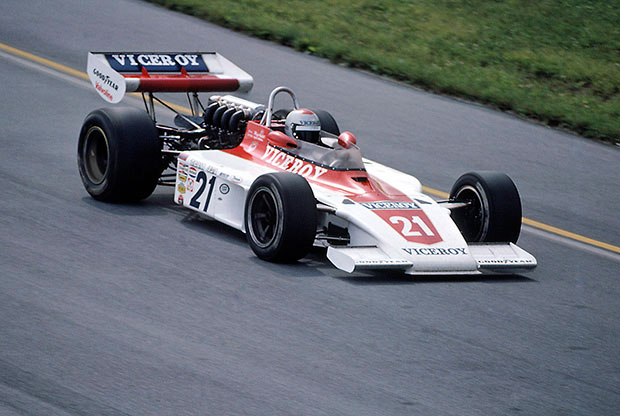 Those are just some of the reasons why Dan Gurney surely deserves a special place in Motor Sport’s Hall of Fame.

Mark Donohue was an equally accomplished all-round driver who was deeply involved with the preparation and racing of his cars. Donohue was Roger Penske’s only driver during the formation of Penske Racing in 1966 and the combination immediately established themselves as the gold standard of American racing. 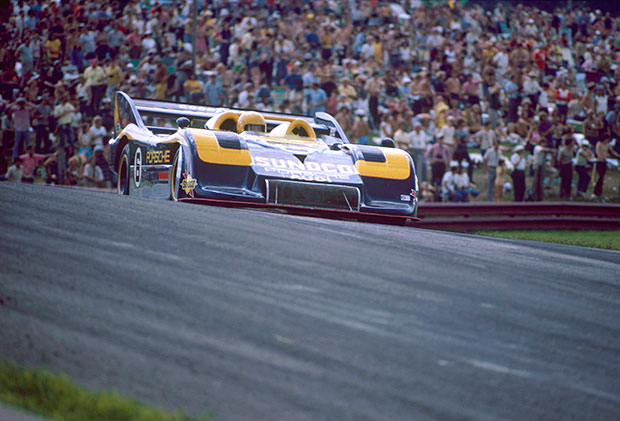 Through Penske Racing’s first 10 years Donohue drove an incredibly rich variety of cars in Can-Am, USRRC, Trans-Am, sports cars, NASCAR, Indycar and Formula 1. The pinnacles of Donohue’s remarkable career were the Porsche 917/10 and 917/30K Can-Am cars of 1972 and ‘73, the product of Penske’s first partnership with the German manufacturer. In 1973 Donohue won six of eight races aboard the 917/30.

Donohue was also Penske’s chief engineer, truck driver, shop floor sweeper and spent many nights sleeping in a bed above the workshop. I doubt that any other driver in the sport’s history has been such a focal point of a team.

Consider Donohue’s 1971 season when he managed and raced cars in six different championships. In a Lola-Ford (then a McLaren-Offy) he ran in nine USAC races, incuding Indy; swept the Trans-Am championship winning seven races aboard a Penske/AMC Javelin; ran the Daytona 24 Hours, Sebring, Le Mans and Glen 6 hours in the team’s Ferrari 512M with David Hobbs co-driving; raced the 512M in the Can-Am race at Watkins Glen; did the Questor GP F1/F5000 challenge race aboard a Lola-Chevy; and in September finished third in his F1 debut driving a Penske-prepared McLaren M19 in the Canadian GP.

An engineering graduate from Rhode Island’s Ivy League Brown University, Donohue worked with a tiny team of six or eight people led by chief mechanic Karl Kainhofer in Can-Am, Indy and Formula 5000 cars, and Leroy Gayne on the Trans-Am cars. 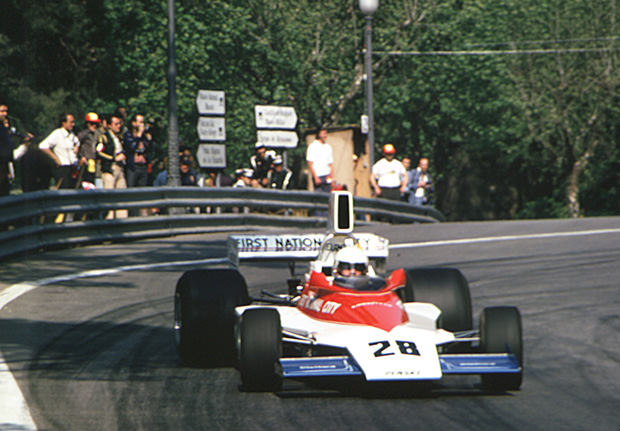 Donohoue retired in 1974 after winning the first IROC championship, and tried to settle in as Penske’s general manager. But he was unhappy out of the cockpit and in late summer he decided to drive Penske’s new F1 car in its debut at the Canadian and United States GPs. Donohue returned to full-time racing in 1975 in Penske’s unsuccessful PC1 car before the team switched to the March 751. At the Austrian GP that August, a suspected tyre failure caused him to crash heavily in the morning warm-up and he succumbed to head injuries two days later.

Donohue’s chief mechanic Kainhofer looks back on his years with Donohue with great pride: “You can compare Penske Racing’s Donohue years to the best of any other race team in history.

“It was so different with Mark compared to working with anybody else. You didn’t need anybody else. He made his own decisions about how to set up the cars and how to run them. From day one of testing all the way through to the race weekends and the races Mark decided what we were going to do.

“He did his own thing with all the cars we ran and some years we ran four or five different cars. Whether it was a Can-Am car, an Indy car, a sports car, a Trans-Am car – whatever – Mark called the shots. You can’t compare what Mark did to what they do now. Today, they’ve got six engineers telling the drivers what to do. It’s a completely different world.” 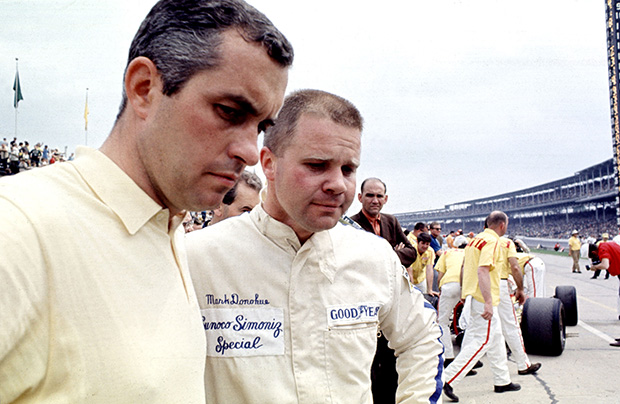 Roger Penske provides his assessment of Donohue: “With his engineering background and racing experience, Mark always took a very analytical approach to setting up the cars.

“He always considered every variable and worked through each of them when he tested the cars to achieve the most competitive set-up he was comfortable with driving.

“He loved to test and was one of Goodyear’s favourite test drivers based on the comprehensive feedback he could communicate for their tyre development. His focus was not just on having the fastest car but also the best race set-up over long runs, as his performance record verified.”

Mark Donohue laid the foundation for Team Penske’s remarkable record over 50 years of more than 420 wins and 450 poles. Driven by an incredible work ethic with a brilliantly analytical mind Donohue was a man from a different age.

It’s a well-worn cliché, but they don’t make them like Gurney or Donohue anymore.

Vote for them here.