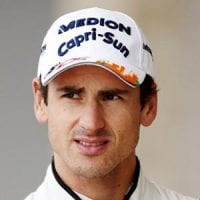 The son of professional musicians and a talented concert pianist himself, Adrian Sutil’s seven seasons as a Grand Prix driver included flashes of promise and too many incidents with others. Especially adept in changeable conditions, his raw talent and speed could not be matched by much needed consistency. In addition, he was also implicated in a nightclub brawl after the 2011 Chinese GP that forced him to miss the following season at a crucial time in his Formula 1 career.

Sutil was already 14 years old when he started to compete in karts but he switched to cars in 2002. He won that year’s Swiss Formula Ford 1800 Championship (winning every race of the less-than competitive series) before switching to German Formula BMW a year later with HBR Motorsport. Second during the final weekend at Hockenheim was one of three podium finishes as Sutil claimed sixth in the points.

He joined Team Kolles for an inconsistent campaign in the 2004 Formula 3 Euroseries. Pole position at Adria was followed by Sutil’s best result of the season, finishing fourth despite a spin. He switched to ASM for the final weekend of the season at Hockenheim and was fastest in qualifying once more. He remained with ASM in 2005 and won twice (Spa-Francorchamps and Nürburgring) as he finished a distant runner-up behind team-mate Lewis Hamilton. Sutil was also second behind Hamilton in the Zandvoort F3 Masters before representing Germany in three A1GP rounds that winter.

Rather than remain in European F3 for a third season, Sutil accepted a works TOM’s drive in the Japanese series and that move paid dividends. His Dallara F305-Toyota won five times as the German clinched the title and he was third in the Macau GP – beaten by Mike Conway and Richard Antinucci.

In addition to his F3 exploits during 2006, Sutil joined the Kolles-managed Midland F1 team (formerly Jordan Grand Prix) as a reserve driver and he was Friday test driver at the European, French and Japanese GPs.

The team was acquired by the Spyker car company in September 2006 and rebadged for the 2007 F1 World Championship with Sutil promoted to the race team. Against a background of imposed financial restraint due to modest budget, Sutil showed promise, even topping the time sheets in Saturday’s wet free practice session at Monaco. The Japanese GP was held in near monsoon conditions at Fuji and Sutil delivered the team’s only point of the season when he inherited eighth position when Tonio Liuzzi was penalised for overtaking under yellow flags.

Vijay Mallya acquired the team that winter and Sutil was retained by the renamed Force India for 2008 – its fourth identity in as many years. However, errors that could have been forgiven a year ago as those of a rookie were now seen as inconsistency. His Force India VJM01-Ferrari retired from 11 GPs including crashing out five times. That included during the closing stages of the wet Monaco GP when Sutil was on course for a fine fourth place finish before Kimi Räikkönen lost control and crashed into him at the chicane.

He was retained by Force India despite that pointless campaign. With the team now powered by Mercedes-Benz engines, it enjoyed a welcome upturn in form at the end of the European season. Giancarlo Fisichella converted a surprise pole position for the 2009 Belgian GP into a second place finish and Sutil starred at Monza. Having started from the front row for the only time in his F1 career, Sutil recovered from hitting one of his mechanics during a pitstop (without injury) to set the fastest race lap and finish fourth.

The 2010 season began with Sutil making it into Q3 for the first four races including starting fourth in Malaysia. Fifth in the race, he repeated that result in Belgium despite richer teams out-developing Force India as the season progressed. He outperformed team-mate Liuzzi and completed his best season so far 11th in the World Championship.

Although Sutil would finish 2011 with his best position in the world championship, much of the year was overshadowed by an incident in a Chinese nightclub. Alleged to have assaulted Lotus Renault co-owner Eric Lux, Sutil eventually appeared in a Munich court in January 2012 and he was found guilty of bodily harm for which he received a suspended 18 month sentence and €200,000 fine. Such a pity that escapade masked his finest season to date – scoring points on nine occasions and a career best ninth overall.

Return to Force India and Sauber

After a year away from the sport, Sutil made a surprise return to Force India in 2013 and was immediately back in the limelight. He employed an alternative tyre strategy to lead the Australian GP before finishing seventh. An impressive fifth at Monaco was the best finish of his year but it would not be enough to keep his place in the Force India line-up.

New permanent numbers were introduced for the 2014 World Championship with Sutil choosing 99 for his Sauber C33-Ferrari. However, this was to be one of the worst seasons for his new team and neither Sutil nor team-mate Esteban Gutiérrez scored a point. That meant that Sutil was left without a drive at the start of 2015. He became Williams’s reserve driver after Valtteri Bottas missed the opening Grand Prix with a back injury but was not called into action in what was his most recent involvement with the sport.