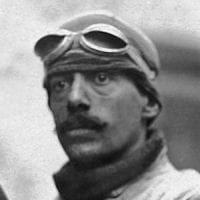 Alessandro Cagno began work in Luigi Storero’s Turin workshops as an apprentice mechanic before joining Fiat’s racing department when still a teenager. He started racing for Fiat in 1902 and remained with the marque for four years.

Third in the 1903 Circuit des Ardennes light car race, he was in the three-car Italian team for the following year’s Gordon Bennett Cup. His Fiat ran as high as fourth before he faded to 10th at the finish. Fiat team-mate Vincenzo Lancia retired from the lead of the 1905 Gordon Bennett before Felice Nazzaro and Cagno salvaged some Italian pride by finishing in second and third positions respectively.

Just 10 cars lined up for the inaugural Targa Florio in 1906 with Cagno now driving an Itala. He was in a secure lead by the time he completed the first of three 90-mile laps and he won by over 30 minutes. In the field for the very first French Grand Prix in 1906, Cagno’s Itala retired with a holed radiator. The year ended with a trip to America and seventh position in the W.K.Vanderbilt Cup on Long Island.
That the Targa Florio had been a success was reflected in the huge entry received for the 1907 race although Cagno could only finish fifth that day. He did win the Coppa Velocita di Brescia despite being delayed on the opening lap by magneto troubles and was third in the following year’s Coppa Florio at Bologna.

Cagno was increasingly absorbed by aeroplanes and flying at the time but returned to Fiat in 1912 as chief test driver. He also raced in GPs once more and retired from the 1914 French GP.

World War I and subsequent career

He served with Italian forces during World War I before making a brief return to the circuits after nine years away. Driving the sole supercharged Fiat 803 in the 1923 Gran Premio della Vetturette at Brescia, Cagno led from start-to-finish and also won the Leningrad-Tbilisi-Moscow trial in what was his last season as a driver.

Having stopped racing, Cagno continued to work in Fiat’s race department before running a dealership for the company.