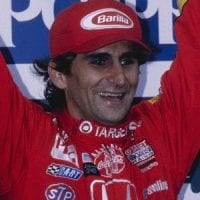 A Formula 1 career in which he flattered to deceive, double champion in the Champ Car World Series, or his inspirational comeback after having both of his legs amputated. Where do you start with the life of this remarkable and popular Italian?

After landing the 1987 135cc Super A European Karting Championship with wins in all five rounds, Alex Zanardi graduated straight into the following year’s Italian Formula 3 Championship. Narrowly beaten to the 1990 title by Roberto Colciago, his RC Motorsport Dallara F390-Alfa Romeo then won the one-off race at Le Mans that decided that year’s European Champion.

Zanardi really emerged as a potential star driving a distinctive yellow and purple Reynard 91D-Mugen for the new Il Barone Rampante team in the 1991 FIA Formula 3000 Championship. He won twice (including on his debut at Vallelunga), never qualified outside the top four and finished as a close runner-up behind Christian Fittipaldi in the final points.

That form earned him three end-of-season Grands Prix in the 7Up Jordan 191-Ford in which Michael Schumacher had just made his stunning F1 debut. Without a regular ride for the following season, he tested for Benetton and stood-in for Minardi’s injured Fittipaldi in three mid-season events.

Zanardi was a fulltime F1 driver with Lotus in 1993. He finished sixth in Brazil on his second start for the team but progress was halted by a high-speed accident at Eau Rouge during practice for the Belgian GP. Zanardi was heavily concussed and although he returned to Lotus for the 1994 Spanish GP, he suffered a frustrating remainder of the season.

With F1 aspirations apparently over, Zanardi defected to Champ Cars in 1996 after another period of relative inactivity. That move proved the making of the man and he enjoyed three highly successful seasons driving Chip Ganassi’s Target Reynard-Hondas. Championship victories in 1997 and 1998 put Zanardi back on F1’s radar once more.

He joined Williams for the 1999 F1 season but it was an unhappy move for all concerned. The Italian struggled with the underpowered Williams FW21-Supertec and soon fell out of favour with the team’s management. He did not score a point before being unceremoniously dumped at the end of the season. His reputation, in Europe at least, was somewhat tarnished.

Again Zanardi spent time away from racing before returning to Champ Cars in 2001 with Mo Nunn Racing. It was a year littered with contact and disappointment until the series travelled to Germany in September. His was an abrupt upturn in form at the Lausitzring and Zanardi led convincingly before a late “splash-and-dash” pitstop 13 laps from apparent victory. However, he spun exiting the pits and his Reynard 01I-Honda was T-boned by Alex Tagliani at almost 200mph. His car was almost cut in half and although doctors successfully saved his life they were forced to amputate his severely injured legs above the knees.

How Zanardi responded to his injuries was inspirational. Fitted with prosthetic limbs, he completed 13 symbolic laps at Lausitz in 2003 in a specially modified Champ Car and forged a successful career in the World Touring Car Championship from that season. His time with Roberto Ravaglia’s BMW team from 2005 to 2009 was interspersed with popular victories.

And he turned his attention to another sport to score perhaps his greatest victories. Having competed in the London and New York marathons as a wheelchair athlete, Zanardi represented Italy in the 2012 London Paralympic Games – winning two handcycling gold medals at Brands Hatch. He returned to the Paralympics in 2016 in Rio de Janeiro and won a further two gold medals in the H5 category road cycling men’s time trial and the mixed team relay as well as a silver in the road race.

Now 51-years-old, he made a guest appearance for BMW in the 2018 DTM races at Misano and finished fifth in race two. He returned in the Super GT x DTM Dream Races at Fuji in November 2019 – finishing 13th in the second race.

In June 2020, Zanardi suffered a major handcycling accident while competing in an Italian road race event. While on a descent, Zanardi lost control of his handbike and hit an oncoming lorry. He suffered major cranial injuries and was airlifted to hospital and treated for his head injuries. Since the accident, he has reportedly made strong progress having been in a serious condition, and by December 2020 was able to gain his eyesight and hearing back. In 2021 it was confirmed that he was able to speak once again following further surgery.