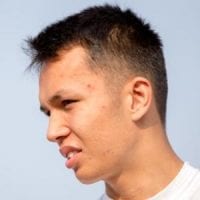 The 2022 Williams F1 driver, already has grand prix experience with Red Bull and has shown impressive pace in single-seaters

Alexander Albon will return to the Formula 1 grid in 2022 after a rollercoaster few seasons in grand prix racing. He was the revelation of 2019 in his first Formula 1 season but struggled to repeat his form in 2020 with Red Bull.

This ultimately lead to a demotion to reserve driver for 2021, with Red Bull Young Driver guru Helmut Marko saying Albon was “not consistent enough” and therefore costing the Milton Keynes squad in the championship.

Albon was given a DTM ride for 2021 by Red Bull to keep his racing instincts sharp, and won at the Nürburgring, shortly before his Williams F1 contract for 2022 was announced.

The son of former British Touring Car Championship driver Nigel Albon and a Thai mother, he races under the latter national licence.

Early career in karts and cars

The eight-year-old Albon began racing karts in 2005 and he won the following year’s Kartmasters British Grand Prix. Super 1 Champion that year, he completed his karting career by finishing as runner-up in the 2011 CIK-FIA World Championship.

A member of the Red Bull driver programme, he graduated to car racing in Formula Renault 2.0 in 2012 with EPIC Racing. He qualified second and finished fifth in an ALPS race at Spielberg, but Albon lost the energy drink manufacturers’ backing after a difficult campaign. He switched to KTR for the next two seasons in the category and scored his breakthrough victory in a Northern European Cup (NEC) race at Most during 2014.

Despite the lack of apparent success so far, Albon joined Signature for the 2015 European Formula 3 Championship and scored five podium finishes – including second-place finishes at the Norisring, Portimão and Hockenheim to claim seventh in the final standings.

He switched to the F1-support GP3 Series in 2016 with the crack ART Grand Prix. It was Albon’s most impressive season so far, and he won four times to finish as runner-up behind team-mate Charles Leclerc.

He remained with ART for the 2017 Formula 2 Championship but missed the round at Baku when he broke his collarbone in a mountain biking accident. He returned to finish second in the sprint race at Spielberg. Still in pain from his injuries and struggling to optimise his set-up, Albon’s form dipped from mid-season. However, he completed the year by finishing second in the “reverse grid” sprint race in Abu Dhabi – losing his breakthrough victory when passed on the last lap by a forceful Leclerc.

He agreed a race-by-race deal with DAMS for the 2018 F2 season that re-established his credentials. He converted pole position into Feature race victory on the streets of Baku and was quickest in qualifying for the next two rounds. Further victories at Silverstone, Hungaroring and Sochi saw Albon enter the final weekend second to George Russell in the points. Third overall after stalling at the start of the Feature race in Abu Dhabi, he signed to race for Nissan in the 2018/19 Formula E Championship.

It was a surprise when former backers Red Bull chose Albon to replace Pierre Gasly at Scuderia Toro Rosso for the 2019 World Championship. Release from the Nissan eDAMS Formula E contract was negotiated and Albon scored five top 10 finishes (including sixth in Germany) in the first 12 races. With Gasly struggling in the senior Red Bull squad, they swapped drives and Albon continued to impress. He finished eight of the remaining nine races in the top six with fourth in Japan his best result so far. The exception was in Brazil where a first podium was lost when hit by the recovering Mercedes-Benz of Lewis Hamilton in the closing laps.

Eighth in the 2019 F1 World Championship was good enough for him to be the highest-placed rookie. Unfortunately, 2020 was not a repeat for Albon as he struggled to keep pace with his team-mate Max Verstappen. He had a chance in the first race of the season to secure his maiden podium, but contact with Hamilton once again took him out of contention in the final laps. Poor qualifying and race performances followed, and it took until the Tuscan Grand Prix for Albon to secure his first podium finish.

More poor results followed and rumours swirled over a potential demotion from Red Bull, as other drivers like Gasly and Sergio Perez continued to put in great performances throughout the season. Another podium followed in Bahrain at the third-to-last race, but the writing was very much on the wall as Perez secured his maiden F1 win the following week at the Sakhir GP. Albon was dropped at the end of the season and has been fulfilling reserve driver duty in 2021 for Red Bull as Perez takes his seat.

Albon competed in the DTM series during 2021 with backing from Red Bull when his reserve duties didn’t clash with racing. He finished the season sixth in the standings with a single win to his name.

During the 2021 season Albon was announced as the replacement for George Russell at Williams for the 2022 season, with the latter moving on to Mercedes.