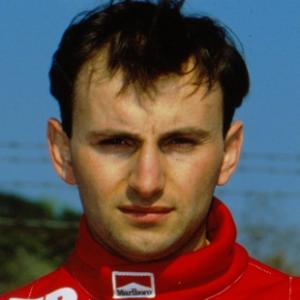 This diminutive Italian made his motor racing debut in a 1987 Formula Boxer race at Monza. It was the start of a long career that included a brief spell in Formula 1 and later success in GT racing.

Second in the Monaco Formula 3 race and winner of the final Italian round in 1989 with Euroteam’s Reynard 893-Alfa Romeo, the 5ft2in Andrea Montermini graduated to Formula 3000 for 1990 with a bang. He qualified Mansell Madgwick’s Reynard 90D-Mugen on pole position for his debut at Donington Park but crashed after 12 laps. Fourth next time out, the Italian scored podium finishes at Jerez (when third) and Le Mans (second) although errors punctuated his campaign.

Armed with a 3001 International Ralt RT23-Cosworth in 1991, he led at Pau before his gearbox failed and qualified on pole position at Hockenheim. Third on two occasions, his third season in the category was altogether more positive. He began 1992 in an Il Barone Rampante Reynard 92D-Judd and was on pole position at Pau and Barcelona. He spun out of the lead of the former but finally delivered his maiden F3000 victory in Spain before his money ran out. Released mid-season, Montermini was snapped up by Forti Corse’s Cosworth-powered team and he won the next two races to finish as championship runner-up behind compatriot Luca Badoer.

Formula 1 at the wrong end of the pitlane

Four Champ Car starts in Euromotorsport’s Lola T92/00-Chevrolet during 1993 included fourth at Detroit and Montermini started 1994 in that series with Dale Coyne Racing. While hopping between drives in North America, the Italian made a one-off F1 appearance in Spain but he failed to qualify the Simtek S941-Ford recently driven by the late Roland Ratzenberger after crashing in practice.

Montermini joined Pacific Grand Prix for 1995 – normally qualifying outside the top 20 and finishing a career-best eighth in Germany. A move to Forti’s under-funded team for 1996 ended when financial reality forced it to abandon F1 after the French GP. Four races with Dan Gurney’s Eagle-Toyota in the 1999 Champ Car World Series brought Montermini’s single-seater career to a close.

He returned in endurance racing during the 2000s and won the 2006 FIA GT race at the Hungaroring with a Zakspeed Racing Saleen S7R-Ford. Montermini has since won championship titles in the International GT Open Series in 2008 and 2013 and GT Italia of 2010.