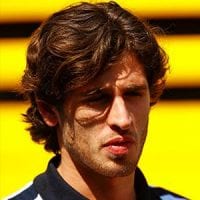 A laid-back Italian from the south of the country, Antonio Giovinazzi is a Ferrari junior driver who became a fulltime Formula 1 driver with the Sauber-run Alfa Romeo Racing team in 2019.

Formula Pilota China was Giovinazzi’s unlikely destination for his single-seater bow in 2012. Champion at the first attempt, he won twice as BVM’s guest driver in the final weekend of that year’s Formula Abarth Championship at Monza.

Formula 3 graduation in 2013 was with a Double R Racing Dallara F312-Mercedes in the European and curtailed British championships. He struggled in the former but won at Silverstone and Spa-Francorchamps’ wet race to finish as runner-up to Jordan King in the British series. He switched to Carlin for a second European F3 season in 2014 and recovered from a mid-season dip in form and tendency to overdrive to win during successive weekends at Spielberg and the Nürburgring.

He remained with Carlin for a third F3 season in 2015 and challenged Felix Rosenqvist for the title until the penultimate weekend. Giovinazzi won the Zandvoort Masters and another six European F3 races as he finished as runner-up behind the Swede. Fourth in Macau, he also made his DTM debut at Moscow Raceway when replacing Audi’s suspended Timo Scheider.

Giovinazzi joined newcomers Prema Racing for the 2016 GP2 Series and challenged for the title during his rookie year. He crashed at Barcelona before claiming both wins on the new Baku street circuit – taking race two after an opportunist pass of team-mate Pierre Gasly. He outraced Oliver Rowland to claim second in the Silverstone feature but surrendered the points lead when beaten by Gasly in Hungary. He qualified on pole at Spa-Francorchamps and responded to a disappointing feature race by winning Sunday’s sprint. He won the feature races at Monza (from the back of the grid) and Sepang (having passed Sergey Sirotkin) to lead the championship entering the Yas Marina finale. Fifth and sixth that weekend was not enough as Gasly stole the championship.

Named as Ferrari reserve driver for the 2017 World Championship, Giovinazzi replaced the injured Pascal Wehrlein in the opening two GPs of the season. His Sauber C36-Ferrari was 12th in the Australian GP but Giovinazzi crashed next time out in China. He was Haas F1’s Friday test driver for seven subsequent championship rounds.

He was Sauber’s reserve driver in 2018 and joined the race team as Kimi Räikkönen’s team-mate in the re-branded Alfa Romeo Racing for 2019. Giovinazzi took time to re-establish himself as a race driver and did not score a point until he qualified seventh and finished tenth in Austria. He crashed out of ninth on the last lap of the Belgian GP but scored points at the next two races. A timely fifth-place finish at the Brazilian GP helped Giovinazzi retain his drive for 2020.

The Italian couldn’t build on a positive end to his season as the weaker Ferrari power unit limited Alfa Romeo all year. His ninth place finish at the season-opening Austrian Grand Prix was his best result of the 2020 season.