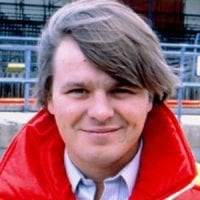 This enthusiastic Belgian attempted to qualify for his home Grand Prix in 1977 but without success. Although family connections smoothed a swift path to Formula 2, Bernard de Dryver was unable to sustain a career in international single-seaters.

He cut his teeth on bikes from 1968 before switching to Formula Vee four years later. Third in Belgian touring cars with an Opel Commodore, de Dryver had loftier ambitions.rnrnHis father was the Belgian importer of Bang & Olufsen Hi-Fi at the time and sponsored his son’s F2 graduation in 1975. It was a big step for the 23-year-old initially struggled to qualify Brian Lewis’s Team Michel Vaillant March-BMW. But he finished fifth (and last) at Rouen-les-Essarts to score championship points. Fourth at the non-championship 1976 Eifelrennen at the Nürburgring, he continued to struggle when F2 points were at stake.

Undeterred by his limited success so far, de Dryver hired Brian Henton’s March 761-Ford for the 1977 Belgian GP but, predictably, he failed to qualify.

B&O funded his third season in F2 that year before a final campaign with Bob Salisbury’s March 782 in 1978. He rarely showed the required pace but tested an Ensign at Zolder in preparation for another GP attempt. However, that Belga cigarettes-funded deal fell through at the 11th hour.

Four underwhelming F2 years had left de Dryver without funding for his next move, so he rented his elderly March to punters to have some fun in the winter. One such wealthy client owned Harksound Hi-Fi and agreed to fund de Dryver’s move to the British F1 Championship in 1979. The Belgian’s RAM Racing Fittipaldi F5A-Ford was consistently in the top six including three second-places as de Dryver came fourth in the standings.

Plans to join Shadow for the 1980 World Championship failed to materialise and his single-seater career, a one-off Formula 3000 DNQ in 1988 apart, was over. He was Team Manager for AGS in F2 during 1981 and turned to national touring cars and international sports cars for his own driving career. The highlight of that period was his second-place finish in the 1987 Le Mans 24 Hours when sharing an Obermaïer Racing Porsche 962 with Pierre Yver and Jürgen Laessig.

De Dryver raced in the 2003 FIA GT Championship and subsequent national events but his own racing appearances are limited to historic events. He has property interests in Malta, runs a racing team in Belgium and restores historic racing cars.