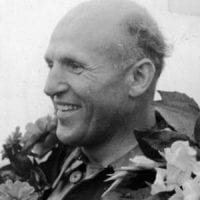 “Big Bill” Whitehouse was a Kentish car dealer and off-licence owner who made his racing debut in the 500cc Formula 3 category during 1949. His Cooper MkII was seldom the quickest in the field but he was often placed.

He won races in the inaugural Brands Hatch meeting and at Rouen during 1950 before joining the works Cooper team for 1951. He also raced a Formula 2 Alta for the first time that year although his second season with that car included a multiple roll at Snetterton’s Riches Corner.

A Connaught A-type was acquired for 1954 with which Whitehouse finished second in Snetterton’s Curtis Trophy and the Joe Fry Memorial at Castle Combe. He also entered the British GP but retired from his only appearance in the world championship.

Out of racing following an accident in 1955, Whitehouse returned two years later with an F2 Cooper T41-Climax that he raced in a team with his son Brian. They travelled to Reims for the 1957 Coupe Internationale de Vitesse but Whitehouse was forced to borrow Roy Salvadori’s streamlined T39 when his car suffered engine problems during practice.

However, Whitehouse punctured a tyre on braking for the hairpin at Thillois after two laps. The car rolled and burst into flames on impact. Whitehouse was severely injured and he died in hospital. Herbert MacKay-Fraser also lost his life later in the race.