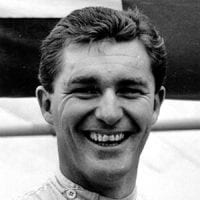 Bob Anderson was a Grand Prix privateer during the 1960s – running his own car under the DW Racing Enterprises banner against the might of works teams. He had enjoyed a successful motorcycle racing career during the previous decade when second in the 1958 Isle of Man TT was his finest result. He ended that first season in the World Championship by finishing eighth in the 500cc class and fifth in 350cc riding a Norton.

A motorcycle star makes his way on four wheels

A back injury forced Anderson to switch to cars in 1961 and he joined Team Lotus a year later to race in Formula Junior. The highlight was a third-place finish at Monaco behind the similar cars of Peter Arundell and Mike Spence. Anderson graduated to Formula 1 in 1963 with a Lola Mk4-Climax that he had acquired from Reg Parnell. He won the minor Rome GP at Vallelunga and started both the British and Italian GPs.

Armed with a Brabham BT11-Climax V8 for 1964, he scored his first championship point when sixth at Zandvoort. A career-best but somewhat lucky third in the Austrian GP followed as others retired on the abrasive Zeltweg airfield circuit. However, he severely damaged the car while practising for the 1965 German GP and he could only afford an outdated and underpowered four-cylinder Climax engine when he returned in 1966.

Despite that handicap, Anderson finished sixth in that year’s Italian GP and fifth in South Africa at the start of the 1967 campaign. However, he crashed at a wet Silverstone while testing ahead of the 1967 Canadian GP and his car hit an empty marshals’ post on the club straight. Anderson broke his neck and was taken to hospital in Northampton where he died later that day