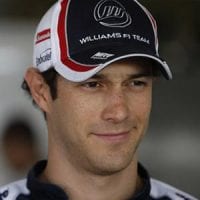 Bruno Senna was a late convert to the sport that made his uncle so famous. He was 10 years old when Ayrton was killed during the 1994 San Marino Grand Prix and his father died two years later in a motorcycle accident.

He had driven a kart around the family farm as a child but he was already in his twenties when Senna moved to England in 2004 to make a handful of starts in Formula BMW. The arrival of a new Senna understandably attracted media attention and the inexperienced Brazilian learnt in the spotlight during the 2005 British Formula 3 Championship.

His campaign with a Räikkönen Robertson Racing Dallara F305-Mugen included two second place finishes but another season with the team was marred by a frightening 150mph accident at Snetterton. However, Senna turned promise into race wins that year and he finished third in the championship.

GP2 beckoned with Arden International and 2007 began with Senna consistently on the pace. He won in Barcelona and scored another couple of podium finishes. He moved to iSport for 2008 and battled veteran Giorgio Pantano for the title – winning twice (including in Monaco) before finishing as runner-up.

Senna tested for Honda and seemed on the verge of Formula 1 but those plans were shattered when it withdrew from the sport. He was considered for the Brawn Grand Prix team that rose from the ashes but it opted to retain the experience of Rubens Barrichello instead.

Formula 1 with HRT, Renault and Williams

He drove for ORECA in the 2009 Le Mans 24 Hours and made his F1 debut with the new Hispania Racing Team a year later. That venture was launched amid financial problems and late payments to chassis builder Dallara. He endured a season in the slowest car in the field and returned in the middle of 2011 with Renault as Nick Heidfeld’s replacement. Impressive as he qualified in the top 10 on four occasions (including seventh in Belgium), he was somewhat impetuous on raceday and ninth in Italy was his only points finish.

He joined Williams in 2012 and finished the Malaysian GP in a fine sixth position. Eliminated from the Spanish GP by an errant Michael Schumacher as team-mate Pastor Maldonado scored a shock win, Senna ended the season inadvertently pivotal to the title fight. Sebastian Vettel crashed into him on the opening lap in Brazil but recovered to clinch a third championship. A disappointing 16th in the standings, Senna was not retained for 2013.

With his F1 career at an end, Senna joined Aston Martin Racing for the 2013 World Endurance Championship during which he won the GTE-Pro class at Silverstone and Austin. He left the team after the 2014 Le Mans 24 Hours and spent 2016 sharing RGR Sport’s Ligier JSP2-Nissan with Felipe Albuquerque and Ricardo González. They won their class at Silverstone and México City and scored another five podiums to finish as LMP2 runners-up.

Senna joined Rebellion Racing for 2017 when sharing an ORECA 07-Gibson with Julien Canal and Nicolas Prost. Second in LMP2 at three of the first four races, Prost having missed round four at the Nürburgring, they won the class at México City, Fuji, Shanghai and Bahrain to clinch the title at the final race.

Rebellion entered a pair of LMP1 Rebellion R-13-Gibsons in the 2018/19 World Endurance Championship. The hybrid Toyotas dominated despite the organisers efforts to equalise performance. Fourth at Le Mans in 2018 and 2019, Senna was second at Silverstone in a Rebellion 1-2 following Toyota’s disqualification. He was third at Fuji and he scored six top five finishes from the eight championship races.

He drove for Mahindra Racing in the first two seasons of the FIA Formula E Championship. He was fourth in the final round in London’s Battersea Park to deny the chasing Sébastien Buemi the inaugural title and was second in that race a year later. Senna finished 10th in both the 2014/15 and 2015/16 standings before leaving the series.