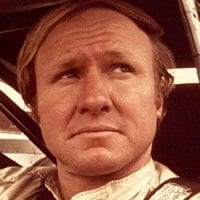 Cale Yarborough was the first driver to win three consecutive titles in NASCAR history. And perhaps he also has as much to do with stock-car racing’s success as anyone due to a fight in 1979.

The 11 year old Yarborough stole into nearby Darlington Speedway without a ticket to watch the first Southern 500. An accomplished high-school footballer, he had been bitten by a snake, struck by lightning and wrestled an alligator by the time he made his NASCAR debut in 1957.

At first, Yarborough raced occasionally in NASCAR and in local sportsman events while working on a turkey farm and as a lumberjack to finance his racing career and to support a young wife.

A NASCAR winner for the first time

He ran a full schedule of NASCAR races in 1965 and the first of 83 victories in the series followed on the dirt at Valdosta that year with Kenny Myler’s Ford Fairlane. Tenth in the championship, he survived a substantial accident at Darlington. Dicing for the lead with Sam McQuagg, their cars touched and Yarborough was launched over the banking and into a telegraph pole although he emerged unhurt.

Yarborough also raced in Indycars at the time. He started the Indianapolis 500 in 1966 and 1967 but crashed a Vollstedt-Ford on both occasions. His only full season in the series was 1971 with Gene White’s Mongoose-Ford during which he finished fifth at both Trenton and Michigan. He raced at Indianapolis for the last time in 1972 and finished 10th.

Stock-car racing was the focus of most of his career and he joined the Wood Brothers in 1966. He finished third in the 1967 Daytona 500 before winning twice that year. The first of four Daytona 500 victories followed in 1968 when his Mercury Cyclone beat LeeRoy Yarbrough by 1.3 seconds. Another five wins that year included his home race (the Southern 500) after he came from two laps down in a wheel-banging duel with David Pearson.

A winner for the next two seasons, he concentrated on Indycars in 1971. He was a fulltime NASCAR driver once more from 1973 with Richard Howard’s Chevrolet Chevelle. The Southern 500 was among his four victories as Yarborough finished as runner-up behind Benny Parsons.

It was his mid 1974 switch to Junior Johnson’s Chevy that turned this race winner into a NASCAR legend. Second in the championship for a successive season was thanks to a second place finish in the Daytona 500 and 10 victories.

The 37 year old took the lead of the 1976 championship in August and beat Richard Petty to his first title. Dominant in 1977, he won nine times (including the Daytona 500) and finished every round with Petty runner-up once more. The Holly Farms colours that had adorned his Chevrolet for those two successful seasons were replaced by those of First National City for 1978. He won 10 times and clinched his third successive title with two rounds to spare.

At the time, NASCAR’s popularity was primarily confined to the southern states. The Daytona 500 was televised live in its entirety for the first time in 1979 and Yarborough attempted to make a last-lap pass for the lead on Donnie Allison on the backstretch.

Allison blocked and they touched several times before crashing into the Turn 3 wall. Once their wrecked cars came to rest, the drivers began arguing only for Bobby Allison to arrive and assist his brother. Fists flew and the ensuing fight – beamed live into America’s homes – was front-page news that helped propel NASCAR into the mainstream.

Yarborough appeared as himself in television’s The Dukes Hazzard that year and again in 1984. NASCAR runner-up again in 1980 after losing out to Dale Earnhardt at the final round, he drove Billy Hagan’s Chevrolet Camaro in the 1981 Le Mans 24 Hours. He impressed during qualifying in the heavy car but crashed at Arnage after an hour when the brakes failed.

He was the first man to top 200mph in qualifying at Daytona in 1983 but lost pole position when he crashed. Ranier Racing hastily readied a Pontiac show car for the race and Yarborough promptly won following a last-lap pass of Buddy Baker – repeating that win for a fourth time a year later.

NASCAR’s toughest competitor continued winning races until 1985 before retiring three years later. He then ran a team until 1999 with John Andretti posting its only victory at the 1997 Pepsi 400 at Daytona.