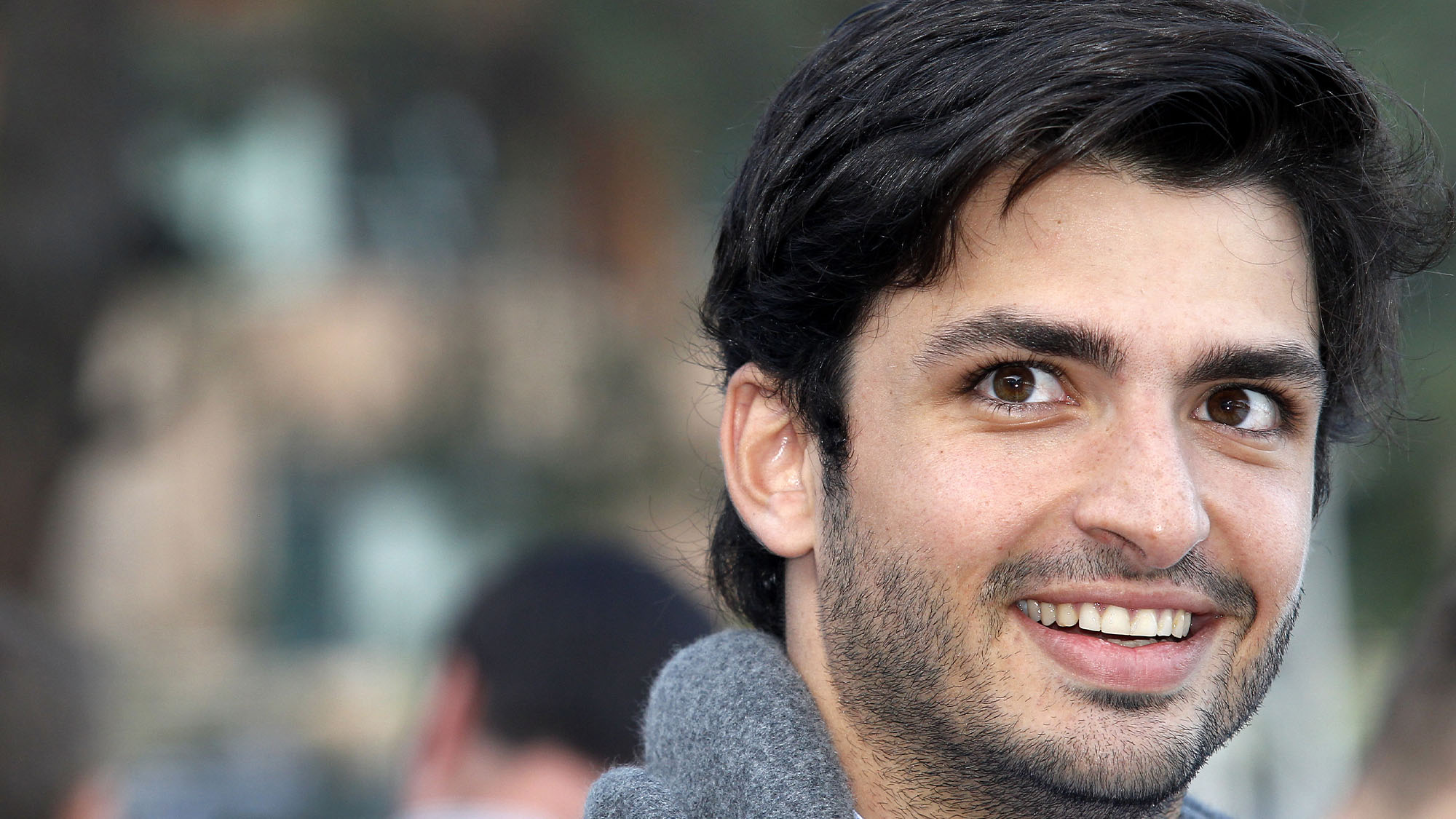 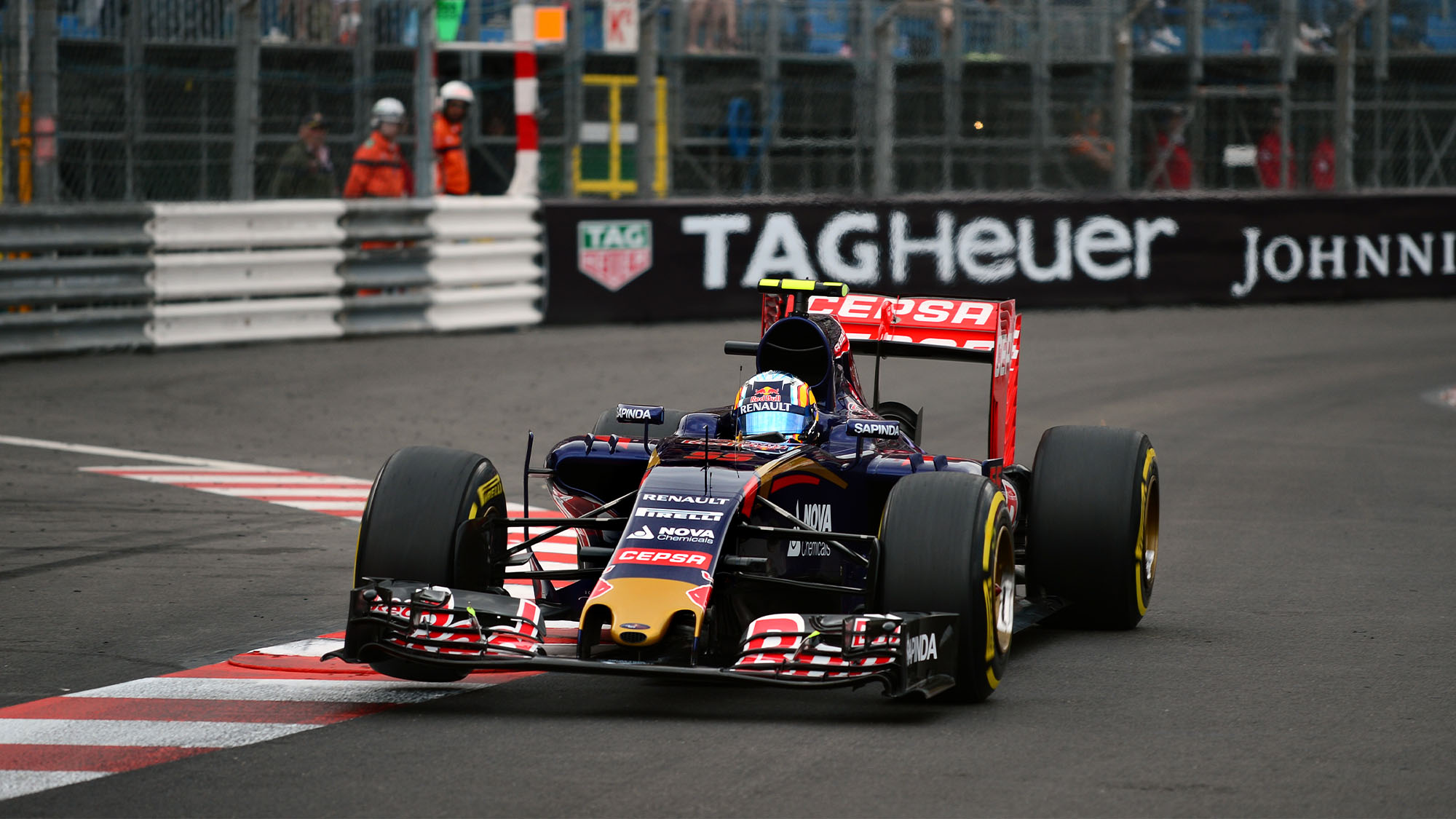 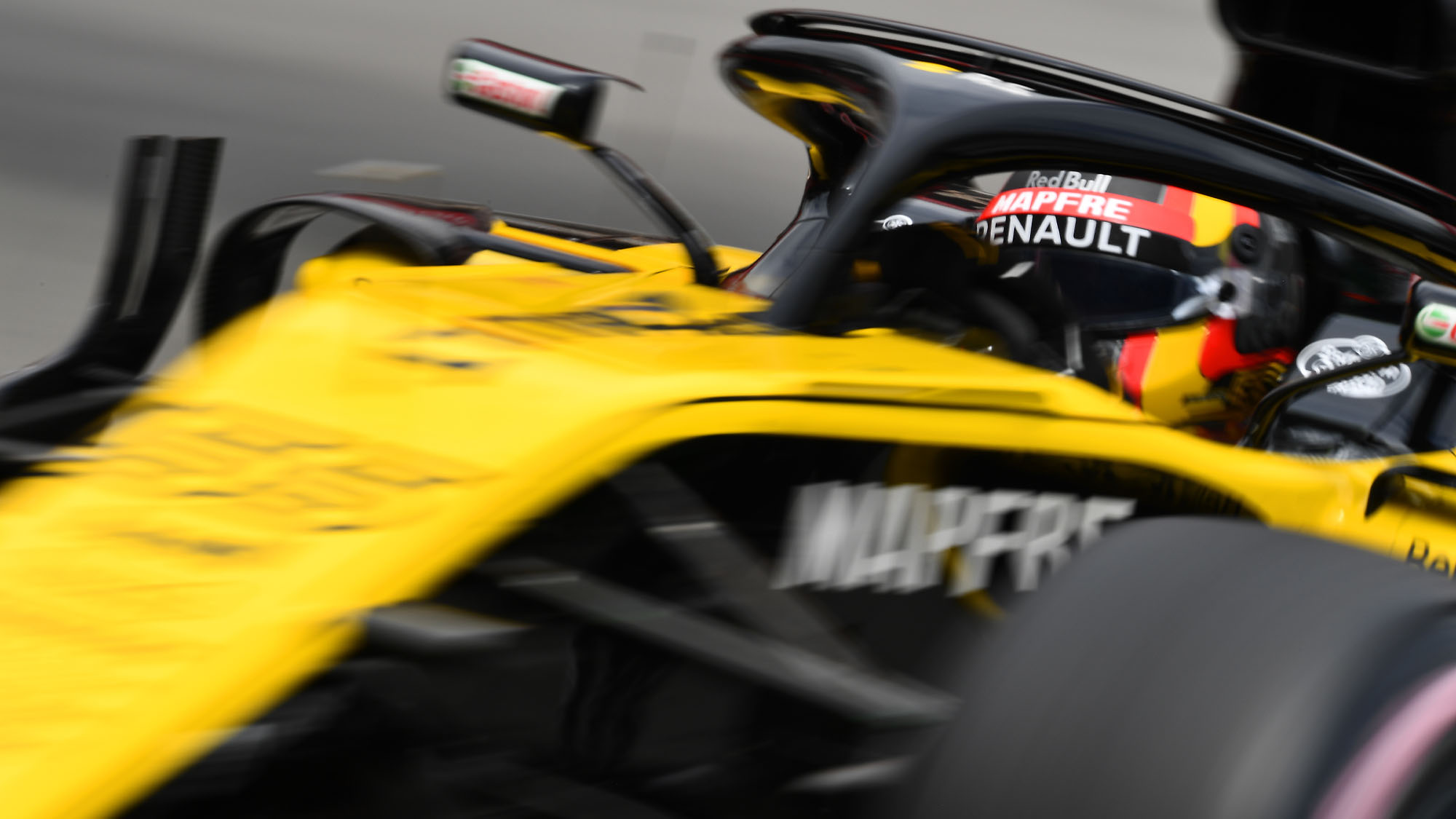 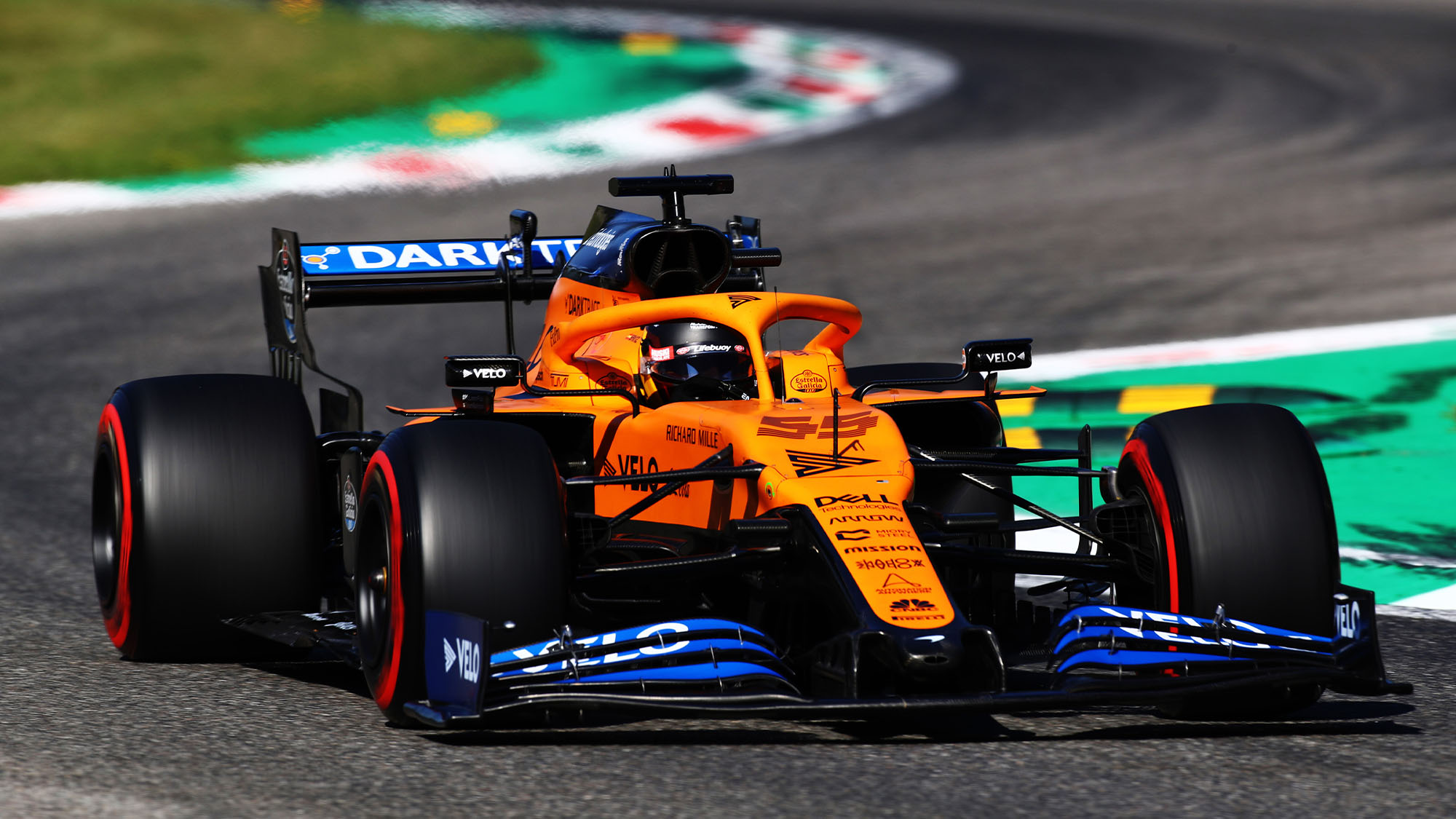 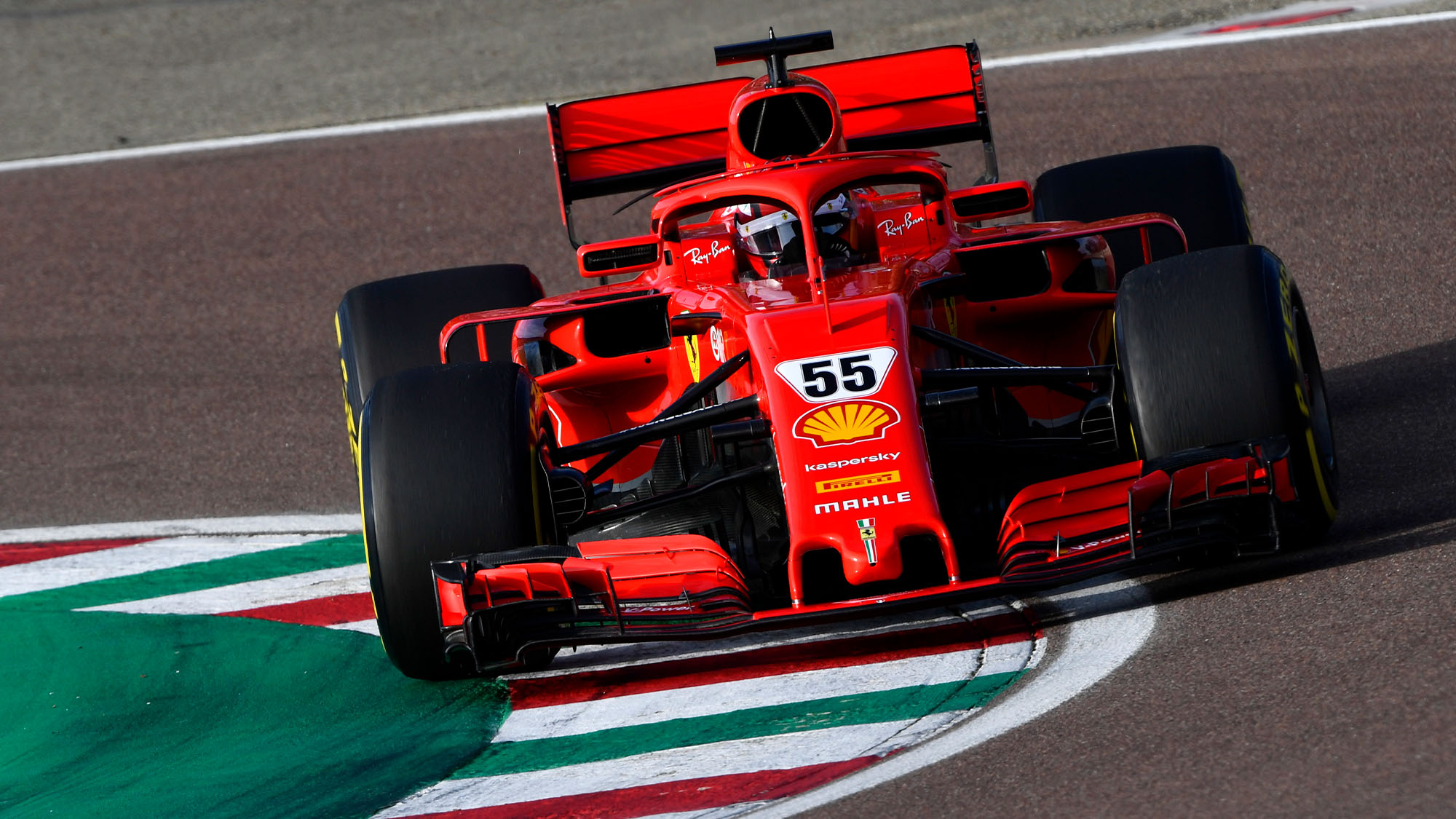 Sainz getting his first taste of Ferrari machinery at Fiorano

The son of 1990 and 1992 World Rally Champion of the same name, Carlos Sainz chose circuit racing as his preferred his career path. His first five seasons racing cars included Formula Renault titles at both 2000cc and 3500cc capacities and warranted his inclusion in one of the least experienced line-ups in modern history when he made Formula 1 debut in 2015.

Early success in karts and cars

The younger Sainz was 10 years old when he started karting on an indoor track owned by his father. The highlight of that early career was victory in the 2009 KF3 Monaco Kart Cup – an event that had previously been won by both Robert Kubica and Sebastian Vettel.

Red Bull saw the potential and backed his move into the European Formula BMW Championship in 2010. He qualified on pole position for both Silverstone rounds and defeated eventual champion Robin Frijns in Race Two. Fourth in the final European standings, he scored another three victories (including at Macau) while a guest driver in the Pacific series.

He graduated to F.Renault 2.0 in 2011 as Daniil Kvyat’s Koiranen Brothers team-mate. Sainz won races during the opening two Eurocup weekends at Motorland Aragón and Spa-Francorchamps to lead the standings. However, a mid-season dip in form (including being penalised at Silverstone) meant he was overtaken by Frijns by the end of the season. Some consolation came in the Northern European Cup – Sainz winning 10 times to beat Kvyat to the title.

A move to Formula 3 followed in 2012 when driving Carlin’s Dallara F312-Volkswagen. It was an inconsistent campaign although he impressed on occasion – especially in the wet. Four victories included a double success at Monza as Sainz finished fifth in the European standings and sixth in Britain.

Sainz joined MW Arden for the 2013 GP3 series but was overshadowed by team-mate Kvyat. While the Russian eventually eased to the title to earn an F1 seat for the following season, Sainz could only finish 10th overall after scoring just two podiums all season. He also made his F.Renault 3.5 debut during 2013 and looked to that series for progress at what was already a crucial stage of his career.

Formula Renault 3.5 – no margin for error

His first full F.Renault 3.5 season was with reigning champions DAMS and he responded with a record breaking campaign. The rookie won seven times during 2014 as he clinched the title exactly 24 years after his father had won the World Rally Championship for the first time. With future plans still unclear (seemingly having been usurped by Max Verstappen in Red Bull’s junior ranks), Sainz tested a Red Bull RB10-Renault at Abu Dhabi after the final Grand Prix. He impressed sufficiently to be promoted to the sister Toro Rosso team for the 2015 Formula 1 season.

Team-mate Max Verstappen stole the headlines during the 2015 F1 World Championship due to his age and raceday heroics but Sainz also enjoyed a noteworthy campaign. Seventh on the grid for his debut in Australia and in the points that race and the next, Sainz then qualified fifth for his home race. Indeed, it was his single lap pace which proved most impressive – the Spaniard out-qualifying his highly rated team-mate over the season. However, reliability issues plus accidents in Russia and the United States too often thwarted the chance of further points finishes.

He flourished during a consistent 2016 campaign despite his Toro Rosso STR11 now being powered by a year-old Ferrari power unit. Having compared favourably with Verstappen before the Dutchman’s promotion to Red Bull Racing, Sainz then overshadowed the demoted Daniil Kvyat for the remainder of the season. He finished sixth at Barcelona, Austin and Interlagos – his best F1 results so far – despite STR’s slow technical development.

The 2017 Toro Rosso STR12-Renault was a difficult car but Sainz scored points in the opening two races of the year, including seventh in China when the only driver to start on slicks on the wet track. He was seventh in Spain before holding off Lewis Hamilton’s Mercedes to finish sixth on the streets of Monte Carlo. A career-best fourth in Singapore and having already signed a 2018 Renault contract, Sainz switched to the Enstone-based team for the last four races of the season. He immediately finished seventh in the United States and ended the year ninth in the 2017 World Championship.

Sainz struggled to get to grips with the Renault RS18, especially in qualifying, and was unable to impose himself over experienced team-mate Nico Hülkenberg. He finished fifth in Azerbaijan but was replaced by Daniel Ricciardo at the end of the season.

Instead, Sainz replaced compatriot Fernando Alonso at McLaren and enjoyed a healthy partnership with rookie team-mate Lando Norris as team and driver re-established themselves in 2019. Outqualified 10-9 by the Englishman, Sainz excelled on raceday and snatched sixth in the final standings on the last lap of the final race of the year. He took an excellent eighth in Austria after several late overtaking manoeuvres and came from the back of the grid again in Brazil to claim McLaren’s first podium finish since the 2014 Australian GP.

That upturn in fortunes could not have come at a better time for Sainz will replace Sebastian Vettel at Ferrari in 2021.