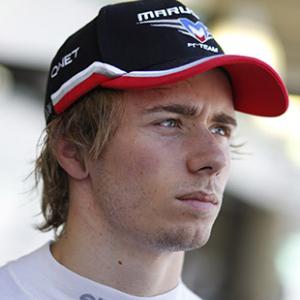 The godson of Eric Bernard, it was inevitable that Charles Pic should race from the moment that Bernard bought him a kart for his birthday. Karting success included finishing third in the 2005 European KF3 Championship for Juniors.

That was with Simon Abadie’s Tech 1 Racing and once again Pic proved a race winner if not the class of the field. He won twice each year including a dominant performance at Monte Carlo in 2008.

Third in the 2009 championship, he switched to that winter’s GP2 Asia Series with Arden International. Having qualified on pole position at Abu Dhabi, Pic came from fourth on the grid to win the sprint race at Bahrain as he came fifth in the final standings.

He remained with Arden for the main 2010 GP2 Series and avoided a first-corner pile-up to win the opening race at Barcelona. That was the highlight of an inconsistent campaign and Pic switched to Barwa Addax for his second season at this level.

Fastest in qualifying on three occasions, he again won the feature race at Barcelona. That was after team-mate Giedo van der Garde was delayed and Pic subsequently converted pole position for Monaco’s sprint race into another victory.

Formula 1 at the back of the field

Pic, fourth in the championship, ended the season by testing a Formula 1 Virgin MVR-02-Cosworth at Abu Dhabi. Signed to race for the renamed Marussia team in the 2012 World Championship, he generally compared well with experienced team-mate Timo Glock. Points may have proved impossible for the team but Pic finished 12th in the Brazilian Grand Prix – his final race before joining Caterham for 2013.

Pic’s second F1 season proved a disappointment as Caterham struggled at the back of the grid. He finished 14th on a couple of occasions but that was not enough to beat Marussia into the financially important 10th in the constructors’ championship. Test driver for Lotus-Renault in 2014, he drove on the Friday of the Italian GP but that was the end of his F1 career to date.

He made five starts in the inaugural 2014/15 Formula E season – finishing fourth in Beijing on a one-off with Andretti Autosport and returning to the all-electric series as Ho-Pin Tung’s replacement at China Racing. Eighth in the 2015 Monaco ePrix, Pic left the team after the Berlin event and has not raced since.

He is now a director of the Charles Andre Delta Route truck company in Montelimar.