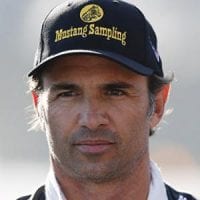 He started racing karts when 11 years old and needed special dispensation to make his Brazilian Formula Ford 2000 debut before his 18th birthday. He finished that 1988 campaign as runner-up before winning the 1989 Brazilian Formula 3 Championship with a Reynard 883-Alfa Romeo.
The Sud-Am title followed in 1990 while Fittipaldi also raced in British F3. He was Mika Häkkinen’s West Surrey Racing team-mate during 1990 and his Ralt RT34-Mugen won at Donington Park as Fittipaldi clinched fourth in the standings.

He moved straight into Formula 3000 with Pacific Racing’s Reynard 91D-Mugen and qualified on pole position for his debut at Vallelunga. Victory at Jerez was a highlight of a consistent campaign and the rookie clinched the title by winning the final round at Nogaro.

Formula 1 with Minardi and Footwork Arrows

He immediately declared “I won’t go into F1 just for the sake of being there” but spent the next three seasons in the midfield, starting with his debut at the 1992 South African Grand Prix with a Minardi M191B-Lamborghini. He showed maturity and qualifying pace at the start of the year but missed four races after injuring his back during practice at Magny-Cours. He twice failed to qualify on his return before finishing sixth in Japan.

Fittipaldi remained with the Italian minnows for 1993, now with Ford power. A career-best fourth in the opening round in South Africa and fifth at Monaco meant that Minardi briefly led Ferrari in the championship but he did not score again. The abiding memory of that season was when the Brazilian ran into the back of team-mate Pierluigi Martini at the finish of the Italian GP. He was launched into a frightening cartwheel and crossed the line upside down to finish eighth.

A year in the Arrows-run Footwork FA15-Ford included further fourth place finishes in the Pacific and German GPs and a career-best sixth on the grid in Monaco. But 1994 proved to be his last year as an F1 driver as Fittipaldi looked to America for a more competitive future.

A future in Champ Cars

That 1995 Champ Car switch was with Walker Racing’s Reynard 95I-Ford. He was fifth on his debut on Miami’s streets and benefited from late retirements and a disqualification to finish second on his Indianapolis 500 bow.

He moved to Newman-Haas Racing for 1996 and almost won in the rain on Detroit’s Belle Isle but lost the lead to team-mate Michael Andretti with six laps to go. 1997 was interrupted by a spectacular accident at Surfers Paradise in which he badly broke his right leg. However, he returned to finish fourth in another wet race at Portland.

His breakthrough Champ Car season came in 1999 as an altogether more confident Fittipaldi recorded his first pole position (at Rio de Janeiro) and victory (the Texaco Havoline 200 at Elkhart Lake). But he was again sidelined by injury that year after a testing shunt at St Louis.

His second victory was in the final race of 2000 on Fontana’s California Speedway despite a previous lack of form on ovals. He remained with Newman-Haas for 2001 but it proved to be a disappointing and final campaign in the series.

Fittipaldi announced his intention to switch to stock cars and he started 16 NASCAR races during 2002 and 2003. His Petty Enterprises Dodge led a lap at Michigan that second season but he did not register a top-20 finish. Victory in the 2004 Daytona 24 Hours with the Bell Motorsports Doran-Pontiac is one of Fittipaldi’s two wins in Grand-Am.

He was third in that race in 2011 and was a fulltime member of the Action Express team from 2013. Sharing with João Barbosa for the next three seasons, Fittipaldi won back-to-back mid-summer races as he finished fourth in the 2013 Grand-Am Prototype class standings. Grand-Am assimilated the rival American Le Mans Series that winter and Fittipaldi, Barbosa and Sébastien Bourdais began 2014 with victory in the Daytona 24 Hours. Top six all season, Fittipaldi and Barbosa won at Indianapolis and Elkhart Lake as they beat the Taylor brothers to the inaugural United Sports Cars title.

They added the Sebring 12 Hours to their burgeoning North American endurance racing c.v. as they successfully defended that USC Prototype title in 2015. Victory at Watkins Glen in 2016 helped maintain their challenge to the final round – narrowly losing out to team-mates Dane Cameron and Eric Curran. He scored a third victory in the Daytona 24 Hours in 2018 before retiring from motor racing after the following year’s race.

Alongside his racing career, Christian Fittipaldi managed a ranch in Brazil with his father that included 6,000 head of cattle. With a smooth driving style that helped preserve his tyres more than most and especially competent in the wet, Christian Fittipaldi perhaps lacked the aggression to match his rivals in F1.