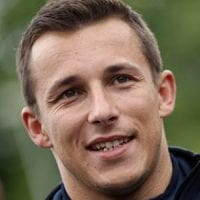 You cannot fault Christian Klien’s tenacity and determination to remain in Formula 1. When long-term sponsor Red Bull dropped him from its line-up for 2007, he refused its backing in another series to stay true to his Grand Prix ambitions. However, a once promising racing career has now given way to occasional appearances sports cars and GTs.

This Austrian graduated from karts to the German Formula BMW series in 1999 and he showed progress during three seasons in the category – eventually finishing third in 2001. He backed that up by winning the 2002 German Formula Renault Championship for JD Motorsport before joining Mücke Motorsport for an impressive campaign in the Formula 3 Euroseries.

Victory in the 2003 Marlboro Masters at Zandvoort put Klien’s name on the radar and his three race victories were rewarded with second in the championship behind Ryan Briscoe. But his next promotion was still a surprise.

Formula 1 with Jaguar and Red Bull

Klien signed for Jaguar Racing for the 2004 F1 season but the jump proved difficult. However, a sixth place finish at Spa-Francorchamps helped earn a second season with the team – now bought and rebranded as Red Bull Racing for 2005. He shared the second seat with new Formula 3000 champion (and latest Red Bull flavour of the month) Tonio Liuzzi.

It is to Klien’s credit that he outperformed the Italian by scoring points in the first three races he started. He finished a career-best fifth in the Chinese GP and was classified 15th in the world championship. David Coulthard’s permanent team-mate for 2006, the year turned sour when Mark Webber was announced for the following season. Klien was offered a sponsored ride in Champ Cars for 2007 but declined in an attempt to remain in F1.

He was immediately dropped from Red Bull’s roster of drivers and he spent time as a reserve or test driver for Honda, Spyker (almost replacing Christijan Albers in the race team from the 2007 Hungarian GP), Force India and BMW Sauber as he tried to return to the F1 grid.

Race outings during that time were confined to Peugeot’s sports car team. He finished third in the 2008 Le Mans 24 Hours and won at Spa-Francorchamps a year later. Klien then returned to F1 when driving the uncompetitive HRT F110-Cosworth in three GPs late in 2010.

He joined Aston Martin Racing for the 2011 Le Mans 24 Hours but both of the team’s cars retired before Klien had the chance to drive in the race. A one-off in the Superstars touring car series in 2012 resulted in Klien’s Maserati winning the second race at the Hungaroring after Camilo Zurcher was penalised. He also raced for Walkinshaw Racing in Australia’s V8 Supercar endurance races that year – finishing ninth at Bathurst with a Holden Commodore alongside Russell Ingall.

He joined Morand Racing for the 2014 European Le Mans Series and his Morgan LMP2-Judd won at Paul Ricard and finished 10th overall in the 24-hours itself. He drove a GT-Pro Emil Frey Racing Jaguar in the Blancpain GT championships during 2016 and 2017.

The team switched marques for 2018 with Klien sharing a Lexus RC F GT3 with Marco Seefried and Albert Costa. Victory in the Paul Ricard Blancpain Endurance race proved the highlight as they finished ninth overall. Klien also works as an F1 expert commentator on Austrian television.