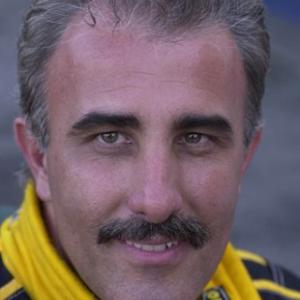 “You always dream but that was a little far fetched” was the immediate post-race thoughts of 1990 Daytona 500 winner Derrike Cope. His victory that day was one of the most surprising results in modern stock car racing history.

Cope’s early experiences were at the local Yakima Speedway before racing in the Late Model Sportsman and the Winston West Championships. An accomplished baseball player in High School, any thoughts of turning professional in that sport was ended by an injured cruciate ligament.

Instead he followed his brother and father (an engine builder) into stock car racing. Cope made his Winston Cup at Riverside in 1982 but his was a stuttering start to his career until he joined Bob Whitcomb’s team in 1989. Immediately more competitive, he enjoyed his day of days at the start of the following season.

Dale Earnhardt entered the final lap of the 1990 Daytona 500 half a lap ahead of Cope’s Chevrolet Lumina but his tyre had been damaged by debris and it blew with two corners to go. Cope withstood Terry Labonte’s late charge to claim his unlikely victory.

Cope won again at Dover that year and finished 18th in the overall standings. But it was an isolated successful season during a career on the fringes, especially after Whitcomb closed his team two years later. Second in the 1995 Dura-Lube 500 at Phoenix in Bobby Allison’s Ford was Cope’s next best result as he finished a career-high 15th in the NASCAR Winston Cup.

Cope hopped from ride-to-ride thereafter and ran a team in the second-tier stock-car series from 2001. That closed in 2017 and, after six years away, Cope returned to the Cup series as a driver with Premium Motorsports. Team and driver parted company in September and Cope started three Cup races in 2018 for StarCom Racing.

Despite this longevity, nothing has come close to matching Cope’s 1990 achievements to date.