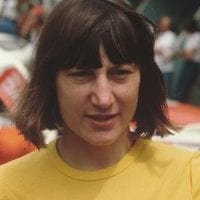 South Africa’s fastest lady holds a unique place in the history books – the only woman to win a Formula 1 race albeit in a British Championship event.

The daughter of national motorcycle champion Charles Randall, Desiré Wilson made her name in her homeland when racing in Formula Vee and Formula Ford from 1972. Winner of the 1976 “Driver to Europe” scholarship, she raced successfully in Formula Ford 2000 and Sports 2000.

With support from Brands Hatch owner John Webb, Wilson graduated to the British F1 Championship in 1978 driving Mario Deliotti’s Ensign N175-Ford and impressed with third at Thruxton her best result. A 1979 move to Melchester Racing’s Tyrrell 008-Ford began with podium finishes in the first three rounds and ended with Wilson seventh in the championship.

The 1980 season was Wilson’s finest. She created F1 history with victory at Brands Hatch with Teddy Yip’s Wolf WR4-Ford and then won World Sportscar Championship races at Monza and Silverstone as Alain de Cadenet’s co-driver. However, an attempted Grand Prix debut was scuppered when she failed to qualify RAM Racing’s Williams FW07-Ford for the British GP.

Undeterred, Wilson drove for Tyrrell in the 1981 South African GP, retiring from a race that was later stripped of its championship status in the FISA/FOCA “war”. That proved to be her last opportunity to join Maria Teresa de Filippis and Lella Lombardi as an F1 world championship starter.

Wilson was fourth in the 1982 Brands Hatch 1000Kms on the debut of the much-vaunted Ford C100 before trying her hand in Champ Cars. She drove a Wysard Racing March 83C-Cosworth during 1983 and 1984. Tenth on her debut in Cleveland proved to be her best result and further outings in a Machinists Union March during 1986 were no more successful.

Having retired from driving, Wilson maintained a presence in the sport through her husband Alan Wilson’s circuit consultancy.