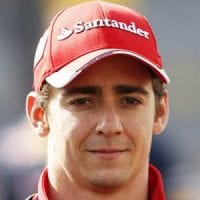 This young Mexican followed compatriot Sergio Pérez through Europe’s junior formulae to Grand Prix racing. However, while Pérez has had his moments in the limelight, Esteban Gutiérrez was unable to reproduce the speed or success previously enjoyed.

It was with Team Autotecnica that the raw 16 year old made his car racing debut in the 2007 Formula BMW USA Championship. He won four times to finish as runner-up behind the dominant Daniel Morad. He joined Josef Kaufmann Racing for the category’s European series a year later and soon resumed his winning ways. Six victories in-a-row, and another at Valencia, helped the Mexican beat Marco Wittmann to the 2008 title at the final round.

That year’s World Finals were held in Mexico City and Gutiérrez started from pole position although he could only finish third in front of his home crowd.

He graduated to the 2009 Formula 3 Euroseries with ART Grand Prix but struggled at first. However, the young rookie improved during the course of the season and qualified on the front row at the Nürburgring. Third that day, he repeated the result at Dijon-Prenois and ended the campaign ninth overall. That season ended with a day testing a Sauber F1.09-BMW as part of his prize for his F.BMW title success.

Gutiérrez remained with ART for the 2010 GP3 Series and battled Robert Wickens for the inaugural championship. Victories at Istanbul, Valencia, Silverstone and Hockenheim in front of the F1 crowds took him to the verge, and he clinched the title by qualifying on pole position for the final round at Monza, then winning Saturday’s race for good measure. Gutiérrez’s connections with Sauber also deepened when he drove the team’s C29-Ferrari in the Abu Dhabi young driver test.

Sauber announced Gutiérrez as its reserve driver for the 2011 F1 season, a move that tied in with its significant Mexican sponsorship. He raced in GP2 that year with the Lotus-backed ART GP but it was not until Valencia that he made an impression. Seventh in the feature race, he converted the resulting front row start into his maiden victory in Sunday’s sprint event. He only finished on the podium once more – coming from 24th on the grid to snatch second from Romain Grosjean at the final corner of the wet Hungarian sprint.

A second GP2 season with Lotus ART in 2012 may have been inconsistent but it included back-to-back feature race wins at Valencia and Silverstone. He then converted pole position for the Hungarian sprint race into another victory that helped him come a distant third in the final standings. He drove a Sauber C31-Ferrari on the Friday of the Indian GP as preparations for promotion to the race team were completed.

Formula 1 with Sauber and Haas

Gutiérrez replaced McLaren-bound Pérez in Sauber’s line-up for the 2013 F1 World Championship. He recorded the fastest race lap in Spain but Gutiérrez spent much of the year mired in the midfield. Out-of-sorts at the start of his debut season, he improved to qualify eighth in Korea and finish in a points-paying seventh next time out at Suzuka.

However, his 2014 prospects appeared little better with Sauber now desperately short of budget. Neither the Mexican nor team-mate Adrian Sutil scored a championship point all year as the Swiss outfit endured a campaign to forget. That consigned the team to just 10th in the Constructors’ Championship and Gutiérrez was without a drive for the following season.

He spent 2015 as Ferrari’s test and reserve driver and was rewarded with a race seat for the following season – joining Ferrari-backed newcomers Haas F1 for 2016. He was involved in Fernando Alonso’s spectacular accident in Australia at the start of another campaign to forget. Gutiérrez failed to score a point and was eventually dropped at the end of the year.

He started three races in Techeetah’s Renault ZE16 during the 2016/17 Formula E season – qualifying fourth in Paris and finishing eighth on the streets of Monaco. He then made his Indycar debut as replacement for the injured Sébastien Bourdais at Dale Coyne Racing from Detroit. Seven lacklustre appearances without a top 10 finished failed to reignite his single-seater career.

He joined world champions Mercedes-Benz as a simulator driver in 2018 and has not raced since those Indycar outings.