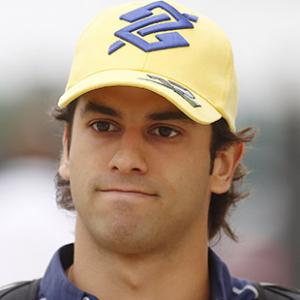 Luiz Felipe Nasr was born into a motor racing family for his father and uncle ran a championship-winning Formula 3 and stock car team in South America. Success in the junior categories and healthy backing from his home country led to Formula 1 with Sauber. A points’ scorer during his promising rookie campaign in 2015, he scored a crucial result for the team at the following year’s Brazilian Grand Prix.

Having raced karts for nine years, it was no surprise that it was with Amir Nasr Racing that he switched to cars for the first time. That was in the Formula BMW races that supported the 2008 Brazilian Grand Prix – Nasr finishing fifth and third as Lewis Hamilton clinched his first Formula 1 title.

That was enough to convince the 16 year old to immediately move to Europe and race in the 2009 F.BMW Eurocup. Early success with EuroInternational attracted the support of Red Bull just as his limited budget ran dry. It was a dominant campaign for Nasr eased to the title with six wins having finished first or second in 14 of the 16 qualifying rounds. The only exceptions came at Silverstone where he lost pole position for both races as his reverse gear did not work. He then charged from 23rd to eighth in both races to emphasise his potential.

The first of two seasons in the British F3 Championship was spent with a Räikkönen Robertson Racing Dallara F308-Mercedes-Benz. Victory in Rockingham’s third race was the highlight as he finished fifth in the 2010 standings, although too many races were compromised by his inconsistent qualifying form.

Nasr switched to Carlin’s six-car Volkswagen-powered line-up for 2011 and was a winner from the opening round. The Brazilian’s performances were altogether more mature and consistent than before and he won seven times to beat team-mate Kevin Magnussen to the title. He finished the year by finishing second in the Macau GP, just 0.359sec behind Daniel Juncadella after ill-timed safety car periods denied victory.

Three seasons in the GP2 Series

There was something of a departure at the start of 2012 for Nasr won the annual Sunoco Challenge to race in the Daytona 24 hours. He shared the third placed Michael Shank Racing Riley-Ford wit Michael McDowell, Jorge Goncalvez and Gustavo Yacamán – finishing on the lead lap on his endurance racing debut. Nasr’s main focus that year was GP2 with reigning champions DAMS. However, while team-mate Davide Valsecchi won the title at the fifth attempt, Nasr encountered problems that restricted him to tenth overall with second in the Belgian sprint race his best result. He also returned to Macau with Carlin and finished the annual F3 race in fifth position.

It was with Carlin that Nasr spent the next two GP2 seasons. He was consistently on the pace at the start of 2013 and only lost the Bahrain sprint race by 0.080sec. However, he never quite delivered that breakthrough victory (finishing second on four occasions) and Nasr faded to fourth in the final standings.

Another GP2 season with Carlin saw the Brazilian challenge Jolyon Palmer for the 2014 title but he proved no match for the Englishman. His maiden GP2 win came at the 50th attempt in Barcelona’s sprint race and he won the feature event in Austria. Further sprint victories at Silverstone and Spa-Francorchamps followed but Nasr was also overhauled by Stoffel Vandoorne at the final round – completing the season third overall. He was also Williams’ reserve driver during 2014 and he was the team’s Friday test driver at five GPs.

Backed by Banco do Brasil since 2012, Nasr graduated to F1 in 2015 with his Sauber C34-Ferrari sporting their blue and yellow colours. The season started under a cloud with Guido van der Garde taking legal action against the team, having also signed to race. Nasr and team-mate Marcus Ericsson raised the spirits by finishing fifth and eighth in Australia – scoring Sauber’s first points for over a year. With van der Garde settling out of court, Nasr scored further points in China, Monaco, Singapore, Russia and America during a consistent campaign in the midfield.

He remained with the cash-strapped Swiss squad in 2016 but it appeared to be another pointless campaign for Nasr and Ericsson. That was until heavy rain turned the Brazilian GP into a race of survival. Nasr was slowest in qualifying but survived the red flags and safety car periods to finish ninth and snatch the lucrative 10th in the constructors’ standings for his team.

Nasr returned to racing in the Brazilian GT3 Championship during 2017 before joining Whelen Engineering Racing for the following year’s IMSA sports car series when sharing a Cadillac DPi-V.R with Eric Curran. They won on Belle Isle and finished on the podium at 50 per cent of the qualifying rounds as they edged Colin Braun and Jon Bennett for the prototype title. Nasr also made his debut in the Le Mans 24 Hours in 2018 with Cetilar Villorba Corse’s LMP2 Dallara P217-Gibson.

Pipo Derani was his regular co-driver for the 2019 IMSA season as the Whelen Cadillac pairing challenged Penske’s Juan Pablo Montoya and Dane Cameron for the title. They finished second at Daytona and won both the Sebring 12 Hours and Petit LeMans, with Curran also driving on each occasion. That dominant victory at the Road Atlanta championship decider was not quite enough for Montoya/Cameron beat Nasr/Derani to the title by just five points.