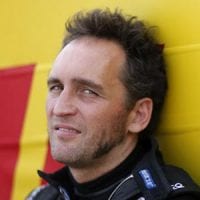 Successful in karting, Montagny graduated to cars in 1994 and immediately won the French Formula Campus series. He raced in Formula Renault for the next two seasons but broke both ankles and damaged three vertebrae in an accident during a race at Le Mans in 1996.

Fit enough for Formula 3 in 1997, Montagny won races during both of his years driving a La Filière Martini-Opel. Always competitive, he won the opening eight races of 1998 only to be narrowly beaten to the title by David Saelens. The next two years were spent with DAMS in Formula 3000 but ultimately proved frustrating with third in Hungary in 1999 his only podium finish.

Montagny choose a sideways move to maintain his single-seater career and it paid off. He won Spain’s Formula Nissan Championship in 2001 and two successful years followed in the upgraded V6 World Series. Runner-up behind Ricardo Zonta in 2002, he switched from Racing Engineering to Gabord Competición to beat Heikki Kovalainen to the 2003 title.

Renault’s F1 test driver from 2003 to 2005 included Friday duties at the French Grand Prix that first season. He then assumed that role for Jordan at the 2005 European GP. However, a race seat was unlikely so Montagny joined the new Honda-backed Super Aguri team as its reserve driver for 2006. Newcomer Yūji Ide was out of his depth and Montagny replaced him from the European GP at the Nürburgring – becoming France’s first GP driver in 18 months. However, he did little with this opportunity to race at the back of the field and was replaced by Sakon Yamamoto after seven starts.

Toyota’s test driver in 2007 and 2008, Montagny finished second for Forsythe-Pettit Racing at Long Beach – a one-off start in the very last Champ Car race. He is now firmly established in sports cars. He was second in the 2006 Le Mans 24 Hours with a Pescarolo C60-Judd and shared the winning Andretti Green Acura ARX-01b in Detroit’s 2008 American Le Mans Series race.

Montagny had also finished third in the 2008 Le Mans 24 Hours with a Peugeot 908 HDI and he was a regular in the French team for the next three seasons. He won Road Atlanta’s Petit Le Mans for three successive years from 2009 to 2011 and the Frenchman continued to come close at the Circuit de la Sarthe. Second in 2009, he was third again two years later.

However, Peugeot’s withdrawal at the end of 2011 left Montagny without a regular drive. Aside from one-offs in the ALMS and Australian V8 Supercars during 2012, he replaced the injured Guillaume Moreau in OAK Racing’s old Pescarolo-Judd at Le Mans but engine failure ended that run.

Montagny joined Andretti Autosport for the new Formula E Championship of 2014/15, a deal which also saw Montagny make his Indycar debut in the Indianapolis GP in May 2014. He was second in the inaugural Formula E race around Beijing’s Bird’s Nest Olympic Stadium.

However, he was suddenly dropped from the team when he admitted that he had tested positive for a banned substance. Handed a two-year ban from the sport as a consequence, he returned to the F1 paddocks in 2017 as an analyst for French television.