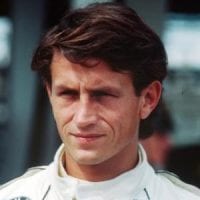 This wealthy Parisian was the surprise choice as second Ligier driver for the 1984 Formula 1 World Championship. He did not score a point and his most notable contribution during the following year was his role in helping develop early in-car camera technology.

The heir to a considerable family transport business, François Hesnault only started racing once he had completed his military service in the French parachute corps. He made his debut in the 1980 French Formula Renault and graduated to Formula 3 two years later.

He began 1982 in a Martini MK37-Alfa Romeo and was the leading national series runner in the Magny-Cours European F3 Championship race. But outpaced by Ralt RT3 rivals, he used his UFO/Antar sponsorship to swap to an ex-Roberto Moreno Ivens Lumar RT3 in September and immediately won at Albi.

Third in the championship that year behind Pierre Petit and Michel Ferté, Hesnault joined champions Dave Price Racing for 1983 and his Ralt RT30-Volkswagen was second in a European round at Magny-Cours and seventh in Monaco. Improving as the year wore on, he won five times to finish just two points behind eventual French Champion Ferté.

Formula 1 with Ligier, Brabham and Renault

Ferté was expected to sign for Ligier in 1984 but it was Hesnault who was named as team-mate for Andrea de Cesaris that season. Out-qualified by the experienced Italian on all-but one occasion, Hesnault failed to score a point and seventh at Zandvoort was his best result.

Undeterred, he joined Brabham for 1985 but was replaced after just three disappointing races, failure to qualify at Monaco and a huge testing shunt at Paul Ricard. His Brabham BT54-BMW was completely destroyed when he crashed at the “S” de la Verrerie and Hesnault was trapped while marshals slowly extricated him.

Uninjured but unnerved, he left Brabham by mutual consent. Hesnault did start a 19th and final Grand Prix in Germany with a third Renault RE60 that was fitted with a prototype on-board camera. With his F1 career over, the Frenchman retired from racing and now lives in Switzerland.