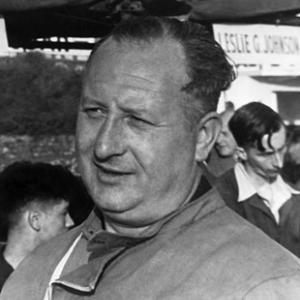 Fred and Joe Ashmore were brothers who competed immediately after World War II. Both raced at home and abroad but it was Fred who had the better record in international events, twice finishing sixth in GPs during 1949.

They shared ERA R1A during 1947 – Fred Ashmore combining with Reg Parnell to finish third at Nice in the car. Parnell entered the Ashmores during the following season when Fred drove the disappointing ERA E-type in the Jersey Road Race. He was back in an old-fashioned A-type when he finished fifth in the first major race held at Zandvoort. Fred Ashmore had upgraded to a Maserati 4CLT/48 by the end of 1948 and finished sixth in the Penya Rhin GP in Barcelona.

Joe had given up international single-seaters by 1949 but it was to be his brother’s most prolific and successful season. Driving a Scuderia Ambrosiana Maserati 4CLT/48, he was sixth in the British and Belgian GPs and might have won the British Empire Trophy on the Isle of Man but for clipping a curb and puncturing his tyre.
That proved to be Fred Ashmore’s final season in international single-seaters as the brothers concentrated on their successful West Midlands businesses. Joe’s son Gerry Ashmore started three GPs during 1961.