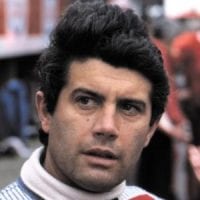 Motorcycling legend Giacomo “Mimo” Agostini dabbled with motor racing at the end of his record-breaking career on two wheels. By then, he had won the 500cc World Championship a record eight times and scored 68 Grand Prix victories. Charming, charismatic and as handsome as Hollywood’s finest – “Ago” was the most successful bike racer in history until Valentino Rossi came along.

Family background and success on bikes

Born into a wealthy Brescia family, he raced secretly at first for fear of incurring his father’s wrath although success precluded anonymity. 1963 national motor cycle champion in the 175cc class, he made his GP debut for Count Alfonso Morini in 1964. He moved to MV Agusta a year later and the combination soon dominated the sport by winning seven consecutive World Championships in both 500cc (1966 to 1972) and 350cc (1968 to 1974) classes.

That success seemed all too easy at times but his pre-eminence was increasingly threatened by the emerging Japanese manufacturers. So Agostini joined Yamaha in 1974 but broke his shoulder in a crash. He then dominated the 500cc Championship in 1975 to add an eighth and final senior world title. It was his last hurrah for Agostini’s career petered out with a return to MV Agusta and a spell on a private Suzuki.

He retired in 1977 and became team manager for Yamaha but also used Marlboro backing to fund two seasons in the British Formula 1 series. A welcome addition to the championship in 1979 when racing a Bracey-Price Williams FW06-Ford, he finished second at Snetterton and third on two occasions to clinch eighth in the standings.

The championship was less competitive in 1980 and Agostini improved to fifth overall thanks to four podium finishes. In truth, however, that second campaign confirmed that the 38-year-old Italian and FW06 chassis were both past their prime.

Agostini was inducted into the Motor Sport Hall of Fame in 2012.